This is not a big book. It's 124 pages in length, but the font is big and there's a lot of wasted space, so there's not a lot of information. It's a quick read.

The author bills herself as "a pioneer mind/brain & consciousness researcher, doctor of psychology and metaphysician with an interest in higher mental states" so I expected high quality material. Unfortunately, it was disappointing.

She lost me even before the first chapter. The introduction poses the question, "What are out-of-body experiences all about?" To answer, she uses an example that is not an OBE at all, but rather remote viewing. She says, in part:


"Here's a true story to give you a glimpse of one type of OBE... Somehow the woman has been able to see Jack in her mind's eye, although common sense says this is impossible..."

"Doctor Roe, a parapsychologist  based at the University of Northampton, is investigating whether it is possible to project your mind to a distant location to observe what is happening there. 'Our results are significant,' he says. 'Remote viewing is something that should be take seriously.'" (pg. 16)

While some people may think that remote viewing can be classified as "out of body experience" I disagree. It's not commonly accepted as such in the literature. In fact, such claims are rare, and experts in the field of remote viewing, such as Joseph McMoneagle, make no such claims. What's the difference? In an out-of-body experience, your consciousness seems separate from your physical body. In remote viewing, your consciousness is completely inside your physical body, but you're psychically "seeing" visions of a distant location. Big difference. She reiterates this position again in a chapter titled "Research Overview" where she writes:

Again, in my opinion, they're two separate things, and remote viewing is performed while "in the body." Oddly, in the questions and answers section, she describes clairvoyance this way:


"A clairvoyant impression is usually seen as a mental image in front of or behind the eyes. There is no sense of having been at the actual scene, and the feeling is that the image was 'received.'" (pg. 117)

That aptly describes remote viewing as far as I'm concerned, and yes, I've read a few books on the subject, taken RV classes and done RV myself. Maybe I'm just being stubborn with my definition of an OBE, but to me it seems pretty straightforward.

The book's subtitle talks about being a "5-Step Guide," so what are the five steps? They are:
So what is her preferred OBE method? She describes it in steps:
I'm pretty sure she's had OBEs herself, but she doesn't really give any narratives and her knowledge seems pretty basic, not very deep (as in Frederick Aardema's book). Even her research into OBEs seems sketchy to me. For example, she states:


"Furthermore, many people accurately report 'seeing' events taking place at a time when the brain doesn't function, such as during cardiac arrest. These cannot be explained by brain changes, since the brain had shut down and flat lined." (pg. 25)

As Dr. Eben Alexander explained in his book Proof of Heaven, just because your heart has stopped (cardiac arrest) does not mean your brain has shut down. Alexander is a brain expert, and his information seems accurate, from other books I've read. Interestingly, his NDE did occur when his brain was shut down completely, by E.Coli Bacterial meningitis. So it does happen, but it's not always the case.

Toward the end of the book, the author talks about brainwaves and brainwave entrainment, barely skimming the surface of the subject. She doesn't talk about binaural beats, hemi-sync technology, infra-liminal sounds, or even much about how or why these things work. Instead, she gives a sales pitch, which was disappointing to see:

"This is included in a special MP3 brainwave training audio collection available at a discounted cost to readers of this book. Additional information is included in the back of the book." (pg. 101)

The book had several typos and grammatical problems. For example, in many cases she refers to the OBE as an "OBE Experience" which I translate in my mind as "Out of Body Experience Experience." Her spelling was okay for the most part, but I doubt if she even used a simple spellchecker. On page 120, I found the word "then" misspelled as "yjrn."  I expected more from a doctor of psychology. She's apparently the author of more than 30 books, so maybe she's just pumping them out too quickly.

Is this the "Ultimate 5-Step Guide to the Astral Projection Experience" as the subtitle says? No. The bottom line is that this book gives some good basics, but doesn't go into enough depth on any subject. 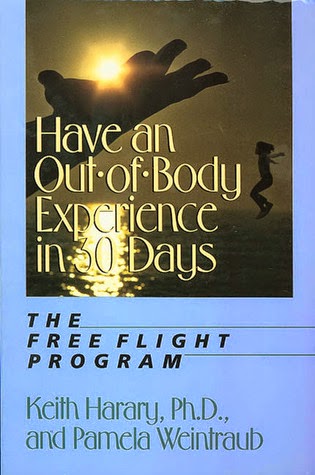