At first this book seemed a little undersized: about 75 pages long, but you'll never guess what happened when I got halfway through it: It ended! That's right. About 32 pages into the book, it just abruptly ended. What filled the remaining pages? A second book called Procrastination by Warren R. Sullivan. That was a huge disappointment. It was not my only disappointment.

The margins are big and the font is big, which means there's almost no content at all. There aren't any page numbers, so it's impossible to reference.

The book has blatant misinformation. For example, she writes:

No no no no no. That's wrong. In the OBE state, it's easy to stick your hand out and feel the texture of the walls (both inside and out!), the textures of the bed and sheets, and anything else. Robert Monroe described OBEs in which he felt the floor below him. Frederick Aardema did OBE experiments completely based on the sense of touch.

What "secret techniques" does she reveal? None, really. She talks about (1) visualization, vaguely. (2) Dreams conversion, vaguely. (3) Sounds frequency, vaguely, (4) Affirmations, vaguely, (5) Hypnosis, vaguely. Get the idea? She's really vague and lacking in detail.

There are no secret techniques revealed. It's all hype meant to sell the book. The few techniques she does give are described much better in other sources, most of which are available online for free.

The writing was immature. I didn't spot any typos or misspellings, but the grammar was horrible. Either Harrington wrote it in high school, or English is not her first language. For a grammar Nazi like me, it was painful to read. It was very wordy; every sentence was twice as long as it needed to be.  In his book On Writing, author Stephen King suggests you can (and should) cut at least 20 (or 25, I forget) percent of the words out of your initial draft without losing any meaning. Instead, this author's sentences are twice as long.

It was also filled with passive voice, the hallmark of an immature writer. For example, in her "Visualization" technique she writes:


"Imagine of a blank space and then your honeymoon destination. Visualize it and you could feel like your destination is somewhere close to a place you already know." (pg. ??)

There aren't even any OBE narratives to give it a feeling of credibility.

I give this book a thumbs-down. It's not even worth considering.

Review: Journey Into the Unknown by D.V. Nobles

Review: Journey Into the Unknown 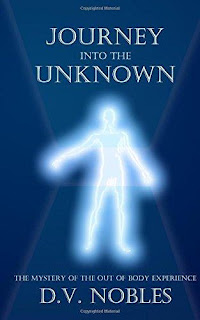 Today I'm reviewing the book Journey Into the Unknown: The Mystery of the Out of Body Experience by D.V. Nobles.

This book is fairly recent. The author, a mature man, only recently stumbled upon OBEs in November, 2014, when he had one by accident. Earlier in his life, he had experienced sleep paralysis (SP), but it never led him to OBEs, unlike Daniel Kai, who learned to leverage SP to induce OBE. Kai advocated a bit of sleep deprivation, but oddly, Nobles says just the opposite:


"I also noticed that if I do not get enough sleep during the night, I will not be able to have an experience. The only thing that happens in this case is that I fall asleep and dream." (pg. 11)


The fact that Nobles had his first real OBE when he was 48 should be encouraging to older people (like me!) who may think OBEs get harder as you get old. Don't forget: Robert Monroe had his first OBEs after he retired.

Here's another point where Nobles contradicts the general consensus:


"There are many people who believe that our souls leave our bodies or we astral project while sleeping, but we are unaware of it. I do not believe this is the case at all." (pg. 22)

I disagree with Nobles and side with the consensus, but it's not just a matter of conjecture for me: I've personally seen it. Many times I've "woken up" in the middle of the night, or during a dream, only to find myself floating above my physical body. Maybe it's not enough to say we do it "every night" but it sure seems like "business as usual" to me when it happens.

In the Questions and Answers section, Nobles answers this question:

Well, I guess I haven't encountered "angels" or "demons" either, but perhaps it's a matter of interpretation. I have encountered "angelic entities," ones that seem to be "guides," and of course the invisible helpers, who I think are probably what many would call angels. None of them had wings. I've (rarely) seen hideous looking creatures that seemed to be malign, but I don't tend to label them as demons. I think it's all about your belief system and the label you want to apply: one man's demon is another man's Djinn, if you know what I mean. And as for "other spiritual entities" there are plenty of those. I tend to think Nobles just needs a few more years of experience. Maybe we'll read about them in a sequel.

Here's another interesting entry from Questions and Answers:


"How long does an OBE last?
Again, this varies among different people. Not many people talk about the actual amount of time their experience lasts. For me, it takes approximately 45 to 50 minutes of preparation and the experience itself lasts for 10 or 15 minutes, often broken into a number of separate experiences. The longest time I have been 'out there', I would estimate at less than 20 minutes." (pg. 46)

Again, this might be a matter of experience. The 45 to 50 minute prep time is about what it takes me too (although sometimes, rarely, I've popped out right away). While most of my OBEs are quite short, I'd estimate the longest I've been out was about two and a half hours.

Like many OBE authors before him, Nobles spent a fair amount of time trying to establish proof that his OBEs were veridical or "real" (had a basis in the physical world). He had his wife write a random 5-digit number on a piece of paper and set it on the ceiling fan in their bedroom. He was not successful in his many attempts, although it did yield some interesting results. In many cases, he was misdirected, or the ceiling fan seemed to be missing. On one occasion:

He presents some discussion on why he had such problems. It was interesting, but not as insightful as the discussion in Frederick Aardema's book Explorations In Consciousness, which I think is the gold standard.

This is a fairly simple OBE book; there's not much to distinguish it from other OBE books. The most interesting thing I found was his discussion on how to clear your mind while trying to induce an OBE. In my books, I called it "quiescing" the mind, but it's hard to explain. In Nobles' discussion, he says that you "Do not allow your thoughts to fully form." He goes on to describe it like this:


"What I mean by this is that when you think of something, it will cause you to thing of something else and so on, causing a full thought pattern. Try to get into the habit of cutting off a thought and letting a separate one appear in its place. If you form complete thought patterns, it will stimulate you to stay in your fully conscious state." (pg. 63)

The way I interpret that is: Prevent the "train" of thought. You want to completely derail that train, leaving nothing but box cars on the track. Or as some people say, "being" versus "doing." He gives a good example of a normal thought pattern compared to a disjointed (derailed) one:


"Normal thought pattern: Oh, the car is low on gas. I need to stop by the gas station next time I go out. Gas is getting so expensive now. I have to check my bank account to see if I have enough money for the light bill. I wonder if I should change my lights to those new eco-friendly bulbs that..."

It takes time and experience to stop your thoughts completely for any length of time, but this processing of learning to derail the train of thought is a valuable step toward that. Very insightful.

As far as OBE techniques, Nobles offers three:
All of these techniques are meant to be preceded by a set of 14 preparation steps, like healthy eating and sleeping habits, lying still, relaxation, breathing normally, and so forth. They're all pretty basic techniques.

This is a medium-short book: 88 pages long, with a smallish font and small margins, which means there's a decent amount of content. It's not a long read, but I did not feel shortchanged either.

The writing is mature, but not highly polished. There were only a couple things that annoyed me as a Grammar Nazi: (1) he used the possessive form "OBE's" where he meant the plural "OBEs" and (2) he misspelled the word hypnagogic as "hypnogogic." (I think I screwed that up in my first book too; which may explain why I became a grammar Nazi.) Other than that, there were very few mistakes.


I give this book a thumbs up. It has a level-headed approach to the topic (neither too skeptical, nor too gullible). It has the thrill and excitement of discovery, but only one or two OBE narratives. It's not as long or as good as the first books by Robert Monroe, William Buhlman, Sylvan Muldoon, Daryl Berry, Frederick Aardema, and others, but I did enjoy it.

Three and a half stars (out of five).

Posted by Bob Peterson at 5:46 AM No comments: