Today I'm reviewing the book Soul Traveler: A Guide to Out of Body Experiences and the Wonders Beyond by Albert Taylor.

Soul Traveler is copyrighted 1996 and that's probably the first time I read it. Now it's one of those classics in OBE literature. It also gained a fair amount of popularity: it's the only OBE book I know that made it to #1 on the Los Angeles Times Bestseller list.

Part of its popularity, I think, is that Taylor was a guest on the famous paranormal radio show, Coast to Coast, back when the late Art Bell was doing the show. I think he became friends with Bell, who invited him back on the show many times. And for good reason: Al is a very dynamic and smooth speaker. And his laugh and smile are infectious. His enthusiasm for OBEs really shows.

But Taylor is not a spacey "woo-woo" new age guy or an occultist. In fact, he has a degree in aeronautical engineering. He used to be an engineer for the American space agency, NASA. So he's more of a "techie" science-minded guy like I am.

I first met Albert Taylor when I was graciously invited to "tag along" at an OBE conference in Boulder, Colorado in 1999, featuring Taylor, William Buhlman and Patricia Leva. Here's a photo of me (left) and Al (right) from that event: 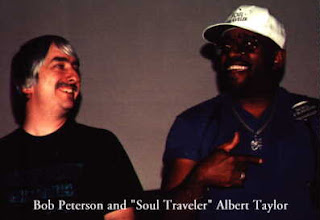 The best thing about this book is the OBE narratives. If you follow my blog, you know how I love narratives. Taylor is a good writer and his narratives portray the excitement of OBE discovery. You really feel part of his journey; the trepidation, the cautiousness, the excitement. All of it.

Taylor mostly gets to his OBEs through the Awareness during Sleep Paralysis (ASP, sometimes simply called SP) state, which is a bit unusual as OBE books go. If you don't know what ASP is, click on this link. He says he's had ASP all his life, and so have a lot of the members of his family. It's not unusual for superstitions to pop up around ASP:


"'The witches are riding you!' is what my grandmother would say whenever someone complained about the paralysis. This so-called paralysis, I found out later, was my own personal doorway to what may be the 'ultimate truth.'" (pg. 2)

Before he learned to turn ASP into OBE, he learned to make grunting distress sounds whenever he had an episode of ASP, and he got his wife, Kathy, to shake him until he woke.

He spoke about his ASP episodes with a friend, Doctor H, a voice of reason, who suggested some experiments. Soon Taylor learned how to turn his ASP into OBE, and started exploring.

He makes many good (and accurate) observations in his OBEs, such as:


"I would later learn that the soul can communicate with other souls but not necessarily with the awareness of the 'personality self.' The 'personality self' is the part of us that interfaces with our every day material world. It is this part of the psyche that hates, fears, envies, and judges--some of our best qualities!" (pg. 12)

That exactly matches my experience: in an OBE, you can talk to someone who is in their physical body, but it's like you're talking to their subconscious, not their conscious self, and they have no memory of it afterward.

Hungry for knowledge, he started reading lots of books (like I did). At someone's suggestion, he visited the local "Eckankar" group, which is where he acquired the term, "Soul Traveler." They suggested some more techniques to improve his OBE ability, some of which he describes. (I'm avoiding the subject of Eckankar here because it's beyond the scope of this review. Some day I'll dedicate a blog article to the subject. For now, let's just say that I treat it as an OBE-based "cult"--and for good reason.)

Like me, Taylor was enthusiastic and tried to share his discoveries with friends and family. That immediately backfired. Like me, he learned the hard way to keep his mouth shut.

One of my favorite moments of the book is when he meets with his dead aunt:


"With two parts courage and one part fear, I curiously inquired, 'Aunt Vera, aren't you dead?'
'Yes, I am!' she said smiling at me.
I stared at her in partial disbelief. Yes it was her--a part of me knew it. I also could feel an intense sensation of love emanating from her. It was wonderful! I returned the feeling without hesitation." (pg. 77)

Although Taylor doesn't really give any OBE techniques in the book, he shares a few valuable insights, such as:


"Note to the would be traveler: The feeling of anger is extremely pernicious to the chain of events which lead to an OBE. Any and all negative emotions will likely stifle any attempts you make to achieve a higher state of consciousness." (pg. 90)

He reinforces this teaching later, stating:


"...emotions like stress, anger, envy or negative thoughts hamper if not sever of the chain of events leading up to an OBE. So, get rid of them...
Remember, inner peace is the goal, and that peace should reflect in as many areas of your life as possible." (pgs. 120-121)

I also really liked this quote:


"Thus, fear becomes an impenetrable curtain between the personality self and the God within. So, simply put, fear is for people who don't know God! If you arrive at this realization you will have very little difficulty during your own soul travels." (pg. 126)

Taylor teaches a basic progressive relaxation technique in the book. In other words, where you tense and relax each of your muscle groups working from the bottom up.

I only found one thing in the book I disagreed with: On page 116, he has a diagram of various planes of existence, and it curiously portrays the astral plane just above the physical plane. But here's the thing: it shows the "etheric plane" highest on the chart, right next to the "Oversoul" which can escape the cycle of reincarnation. This runs contrary to the more popular belief that the etheric plane is just above the physical, and the astral above that. I'm not sure if this is what Eckankar teaches, but it's contrary to what most occultists teach. Other than that, Taylor seems "on the money" with his OBE observations.

Before almost every OBE, he goes through a procedure he calls the "Taylor Pre-flight." This basically consists of these steps:
Taylor also teaches some energy work in which you visualize a ball of energy above you, then draw energy from the ball, circulate it to your feet, then up your body, out through your head, and back into the energy ball.

He also suggests the Wake Back To Bed (WBTB) technique, which he calls the Interrupted Sleep Technique, or IST. In Taylor's version, you go to sleep about 9:00 p.m. (21:00), setting the alarm for 1:00 a.m. When the alarm goes off, get out of bed and stay up until 3:30 a.m. Then lie down on your back again, and do the Taylor Pre-flight.

The book is 138 pages, with decent font and margins, so there's an "okay" (not great) amount of content. There's a lot of white space, so those 138 pages go very quickly: it's a short read. Or maybe it's just that I was glued to the book and couldn't put it down! I finished it in less than a week of casual reading. Compare that to the previous book I read, Blindsight, which is 140 pages, but, as fascinating as it was, took me two months to read because I needed time to digest the material.

My biggest complaint about the book? I wanted more. It's highly entertaining, but it feels short. Taylor really needs to write a sequel: It's been about 25 years; what's happened since?


As a side note: It's not really important, but Taylor and I are polar opposites when it comes to politics (full disclosure: I'm Libertarian). At one point we were Facebook friends and he actually asked me if there was a way he could hide only my political posts from his Facebook news feed. I admit, I got a bit over-zealous with politics, and I've tried to tone that done in recent years. In all seriousness, I suggested he "unfriend" me and just follow the posts on my "Robert Peterson" page, where I purposely avoid politics. I love Al Taylor and respect his views, even if I disagree with a lot of them. When it comes to OBEs, we are brothers.

Posted by Bob Peterson at 6:40 AM No comments: