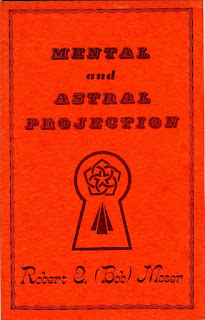 Today I'm taking a trip down memory lane and reviewing the book Mental and Astral Projection by Robert E. Moser, an oldie from 1974. It's a short book; just 55 pages.

I first read this book in August of 1980. I had only had 21 OBEs then, so I was a newbie and I was eager for more. The book didn't stand out in my mind at the time, but after just re-reading it, I'm amazed to see just how much it influenced me.

I remember how disappointed I was with Moser's OBE technique. After spending a considerable amount of time relaxing your physical body:


"Now, if you wish to [astral] project....simply use your imagination to lift yourself free of the body....to go where you have selected....knowing, at all times....that the natural protective mechanisms of your body are working normally...." (pg. 35)

That's pretty lame. He's advocating the use of imagination to induce OBE, and granted, imagination is an important step. But the process is so much more complex than that. I got nothing out of this. By the way, the overuse and abuse of the ellipsis "...." is the author's, not mine. :)


He expands on this technique later in the book. You use your imagination to visualize a doorway with a fancy door, a keyhole, and a key. You customize the door to make it "yours". Only you possess the key, and each time you induce an OBE, you imagine unlocking the door and locking it behind you to keep any foreign entities out. You always take the key with you.

The book didn't make a lasting impression back in 1980, but I did take a few things he said to heart: First, to keep a journal of your experiences. Second, that other entities can't control your body unless you allow them access. Third, the importance of keeping a dream journal and learning dream recall:


"The importance of the effort to receive full dream recall cannot be overstressed." (pp. 43-44)

This book may have also unconsciously prompted my earliest communications with my inner voice:


"Another point I would like to stress is that it is my firm and proven belief, that the superconscious mind has the answers to the information we seek, if we but look inward. It is in me, it is in you. This is our higher self, our God-Consciousness that has all the memory of time within it. We must seek inward and communicate there for the information." (pg. 44)

It probably also fueled my distrust in spirits:


"I do NOT advocate the use of guides on the astral planes. We have no way of knowing or judging who or what may be trying to either help or harm us. On the astral, since we are faced with a different set of values and a new set of rules, we can easily be misled by some entity who is trying to use us." (pg. 47)

In fact, Moser takes this a step further. He stresses not to interact with the astral plane. He advises us to merely observe what we witness. But to quote the 1980s rock song Blinded by the Light, "But mama, that's where the fun is!"

Maybe this book was just what I needed in 1980: A healthy dose of caution, a little esotericism, a dash of distrust in spirits, a few clues about my inner voice, and a few hints on how to self-induce OBEs. There are many OBE books that are far better than this, but I don't regret having read it.

I can't believe it's almost been a month since my last OBE book review. A barrage of crises and obligations left me little time to read. Sigh.

This time I'm reviewing the book Travel Far: A Beginner's Guide to the Out-of-Body Experience, Including First-Hand Accounts and Comprehensive Theory and Methods by Darryl E. Berry, Jr. That's a mouth-full.

The author was kind enough to send me a review copy and I really enjoyed it. Unlike most books in the genre, this one is "just right" in many respects. It's 220 pages: a good amount of content. It has good size paper, good margins, and a good font size. Its grammar and spelling are--you guessed it--good. That's refreshing, especially after the last book's many errors.

I always like to start off addressing the negative things about a book so I can end on a positive note, but in this case I don't have many negative things to say. It's just a good, solid well-rounded OBE book with good content.

The book is divided into two parts.

Part 1 is about the author's personal experiences, and you know how I love OBE narratives. The narratives were interesting, but somehow lacked emotion. Whenever I have an OBE, no matter how mundane, there's an element of, "Oh my God! This is so incredible!" even after 35 years. These narratives somehow lacked that element, so they felt a little "flat". Still, they were fascinating and unusual, even in this admittedly obscure genre. For example, in one OBE, Berry encounters "fire beings". In another, when he was 7 years old, he found himself in "The Desert World" for a solid week! This reminded me of my own childhood experience where it seemed like I had lived in another world for centuries (although it wasn't a desert world). He also writes about encounters with extraterrestrials; an important topic, but rarely found in the genre. Plus another important topic that's often neglected: time travel OBEs. It makes for some fascinating discussion. I can't go into detail here, but check out this quote:

"My perception is that I entered (or made) an alternate universe, a different reality stream or timeline, and lived in that alternate timeline for that duration of time." (pg. 73).

Part 2, "Theory and Methods" is where Berry gets down to business. This is where I perked up and starting flagging pages. He begins by explaining brain waves and states of consciousness. He addresses the topic well. I didn't agree with everything he said (but I rarely do). For example:

"Delta is the state of deep physical sleep, and home to the out-of-body experience." (pg. 83)

I've always believed that OBEs occur during deep theta brain waves, not delta, which agrees with Dr. Charles Tart's experiments on Robert Monroe and "Miss Z." I believe that lucid dreams occur during delta. But who am I to judge? I've never been hooked up to an EEG machine.

In reality, it doesn't really matter, because brain waves are old-school. They only measure what's happening on the outside (cortex) of the brain. Modern neuro-scientists don't give as much credence to brain waves as they do newer technology that addresses the whole brain: fMRI imaging, brain blood flow measurements, and so forth. But that's another topic for a future article.

Berry's approach to OBE practice makes a lot of sense:

"The general goal is to consistently practice so that you move this threshold of awareness at least through the deep theta state. From there you can initiate an OBE." (pg. 85)

In other words, you teach yourself--through practice--to retain conscious awareness deeper and deeper until you can get to the OBE state. It doesn't get much more practical than that. That's kind of how I learned to do it.

Another thing I liked is how the author sets up a clear division between OBE "Basics" exercises and "OBE Initiation." He makes it clear that his "OBE Basics" exercises are more important than the OBE attempts themselves. In fact, he says:

"As a general rule, for every hour you spend practicing to have an out-of-body experience you should spend 1 or more hours practicing one or more of these basics." (pg. 90).

The "basics" are not too different from the exercises of Robert Bruce in Astral Dynamics, but Berry is not so regimented. It was more relaxed and not as serious, and I liked that. It just felt right.

One of the things I liked most about Berry's exercises is that it took a Taoist approach to energy work, which is what I've always used because of my early Tai Chi training. That's unlike (1) traditional Hindu meditation which sends energy straight up the spine and through the chakras and out the crown chakra, (2) the IAC's "velo" technique, which pushes energy up and down in a oscillating fashion, and (3) Robert Bruce's technique which is similar, but focuses on storing the energy in the Tan Tien (navel / belly button chakra). Berry's Taoist method circulates the "chi" up the spine and down the front of your body: in a continuous circle.

On page 128 is his list of OBE techniques, and it's a pretty good list. It includes his own techniques as well as borrowing from other experts in the field. He covers all the basics, including his signature technique, the "Relax-Move Technique." He also suggests some unconventional techniques, such as the "Sleep Signal Focus" technique, which is a method to overcome sleepiness that often overcomes us during OBE practice:


"Become aware of or imagine the sensation of sleepiness and dive into it...You can attempt to 'stay ahead' of sleepiness, diving into it and keeping awareness ahead of it before it drowns you in unawareness. This is a signature technique of my friend Louis." (pg. 131)

One of my favorites is his "Creative Visualization" technique:


"Use your imagination to visualize something that holds your attention. One visualization of mine is to imagine myself engulfed in a flame, as if I'm the wick of a candle, or to imagine a flame in my third eye area." (pg. 138)

The book isn't all dry technique and business. He has just a dash of spirituality too. My favorite quote from the book is:

This is a good solid OBE book; a well-rounded mix of narratives, theory, techniques and spirituality. The author is not pretentious or esoteric. He comes off as your good friend, not Severus Snape.

I give it a big thumbs up. It may not dethrone any in my list of Bob's Top Ten OBE Books but maybe I'll call it #11.