Spiritual But Not Religious 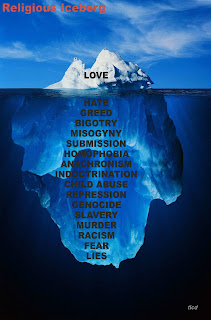 Okay, I know this blog article may offend some people, especially religious people. If you're defensive about your religion, stop reading right now.

On Monday, a facebook friend posted a photo of an iceberg. Above the surface, the iceberg showed one word: love. Below the surface were many words with negative connotations: Hate, greed, bigotry, misogyny, submission, homophobia, anachronism, indoctrination, child abuse, repression, genocide, slavery, murder, racism, fear, and lies.

The photo didn't bother me. I interpret it this way: Many of the "religious right" purport to love everyone on the surface, but beneath the surface they harbour many of those negative traits. Jesus taught us to love. In fact, love is integral to the only two commandments he gave us: (1) love God with all your heart, all your soul and all your mind, and (2) love your neighbour as yourself (Matthew 22:37). Yet many so-called Christians are more focused on discriminating against gay people or other groups than they are focused on God. But that's not what this article is about.


The facebook friend I mentioned obviously interpreted the photo differently because what he posted with the photo was:

Why there's a growing population of "spiritual but not religious" group.

And that really bothered me.

If I understand him correctly, he's saying that the group "spiritual but not religious" is growing because they have love on the surface but all these negative things on the inside? Boy, did he ever get it wrong.

Fighting the urge to speak my mind, and trying my hardest not to start a religious name-calling fistfight, I posted a simple reply to his statement:

No, it's because people are starting to see the truth and the truth doesn't fit the old religious paradigms.

Today, people in general are more scientific. As much as they are mostly still in the dark regarding religious topics, they at least have a better understanding of basic science, physics and anatomy. Science had trained them to look at things analytically, and some are starting to look at their religion with the same critical eye. And what they're seeing often doesn't jibe with what religious authorities are teaching. As much as they're told to "have faith", many don't accept religious stories blindly anymore. Nowadays you question when your thirteen-year-old daughter turns up pregnant and claims she wasn't having sex. You're skeptical when she gives you some wild story about an angel named Gabriel who allegedly said she's been selected by God to give birth to a special boy whose name means God Is With Us. You question that "miracle" a little bit more than you did two thousand years ago and wonder if it's covering up a deeper truth.

When the scientific method is applied to religion, you start to see through the misinformation. You can either ignore the evidence and desperately cling to the belief that people were better observers two thousands of years ago, or take a closer look. When you find a discrepancy, your choices are to lose faith, white-wash the data to fit your beliefs (as so many scientists today do), or to do your own homework. Sadly, out of laziness, most people take the first option, leaving us with a Godless society. But the evidence of God, the afterlife and a spiritual realm are abundant if you look for them.

It's only in the last 300 years or so that people have been free to share their own theories and observations, whether spiritual or scientific. Before that, you'd typically be excommunicated, condemned as a heretic, burned as a witch or otherwise tortured and executed (unless everything you said about your experiences perfectly matched the religious dogma of the dominant religion, in which case they made you a saint).

Case in point, Giodano Bruno, who was burned at the stake for insisting on something we now know is scientific fact: that the Earth travels around the sun. Better known Galileo Galilei said the same thing, and was also condemned as a heretic, forced to recant, and spent the rest of his life under house arrest.

Organized religion has done more to quash scientific discovery than any other force on the planet, but tragically, it's done even more to quash religious discovery. It's systematically destroyed anyone who dares to share what they've learned through their own personal experiences and communion with God.

Isn't it ironic, then, that all the world's great religions were born from the religious observations--based on personal experiences--of people who contradicted their culture's prevalent religion? Great religious leaders like Jesus Christ, Moses, Mohammad, Siddhartha Gautama Buddha, Zoroaster, Patanjali and the like, all followed the same pattern. They all meditated. They all communed with God. They all had religious experiences. They all went through the door and saw the other side. They all fought the religious paradigms of their culture and were brave enough to tell people what they saw. Some, like Jesus Christ, got killed for it.

After their deaths, their disciples took over. Full of good intentions, they spread the word. Not the original, but a twisted version of their master's words, morphed into self-serving political organizations. Without going through the door themselves, they tried to interpret the light coming through the keyhole, and make definitive statements about what is on the other side. Without that direct communion with God, they were lost trying to put physical interpretations on nonphysical events. And in most cases, they failed miserably. So they focused on herding their sheep rather than on God.

We all know why organized religions suppress the religious experiences of their followers: because at the core, they're political organizations. Maintaining power, control and self-preservation are more important to them than "the truth." But you know what? The truth has a way of getting out, despite their best efforts to hide it or keep it for themselves.

As technology advances, religious experiences are becoming more commonplace. Modern medicine has saved thousands from the brink of death, and these survivors have incredible stories to tell about what they saw in their Near-Death Experiences. And their observations don't fit the old religious paradigms.

At the same time, more people today are meditating, going within, becoming self-aware, learning to induce out-of-body and other mystical experiences. They're learning new techniques and sharing what they find. More importantly: they're developing their own personal relationship with God.

What they're finding is that their relationship with God and Spirit have very little to do with the religious organizations: the churches, synagogues, mosques and temples, and the people who control them. I believe God is within everyone's grasp and you don't need organized religions to show you the way. The information is out there. Maybe too much, in fact. Information--both good and bad--is available at our fingertips on our cell phones, tablets and computers through the Internet.

A hundred years ago, you never questioned your doctor. Today it's absolutely essential. People need to take personal responsibility for their health and question everything, not because health care is getting worse, but because the information--and misinformation--is getting out of control.

It's the same way with priests, rabbis, imams and gurus: people must take personal responsibility for their spirituality, their religion and their relationship with God. They need to start questioning time-honoured religious traditions. If for no other reason, because knowledge trumps faith.

To aid them on their journey, the technology is also improving. Now, ordinary people--not just the religious fanatics--are employing Ganzfeld setups, mind machines, flotation tanks, infra-liminal technology, biofeedback, neurofeedback, and hemi-sync to explore the outer reaches of the mind. And what they're finding isn't much like what you find in the pages of the Bible, Talmud, Koran, Avesta or Bhagavad Gita.

That is why more people are becoming "spiritual but not religious."

There's nothing "supernatural" in this life. Nothing is defying the laws of physics. Any theories about reality must make room for everything we experience, both religious and scientific. A science that denies religious observations is just as absurd as a religion that denies the observations of science. Experience is experience and truth is truth.

I like to think that eventually, science and spirituality will meet in the middle. I hope that through direct observations like out-of-body experiences, they will both arrive at a unified view of reality that includes God and spirit as well as physics and biology.

I like to think that one day, we can all directly experience God and see things as Jesus and the others did. And I look forward to that day.