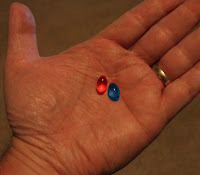 Whenever I'm brave (or stupid) enough to tell a "normal" person about my out-of-body experiences, their initial reaction is usually surprise and disbelief. I accept that; I wouldn't expect anyone to believe it either, until they do it themselves.

Once they get over the initial shock, they often ask me, "Okay, assuming what you say is true: what good is it? Why would anyone want to do that?" They often follow up with, "What do you do, just fly around the room and stuff?"

At first I fantasize about yelling in their face, "What good is it? What GOOD is it?" Then I remember Morpheus from the movie The Matrix.


"You take the blue pill, the story ends, you wake up in your bed and believe whatever you want to believe. You take the red pill, you stay in Wonderland, and I show you how deep the rabbit hole goes."

First, I have to size them up, to see how much "truth" they're ready to handle. Do they want to remain asleep or wake up? They look fairly open-minded, so I start a quiet discourse.

"Do you realize that NASA spent nearly three billion dollars in 2011 to put a robot named Curiosity on the surface of an alien world, Mars? Now consider this: you can step outside of your body and set foot on an alien world, the astral plane, and explore it yourself. For free."

They look confused; perhaps they don't see the connection, so I continue.

"Let me ask you something: How will knowledge of Mars serve you in a practical sense? Will it help you in your daily life? Will it prepare you for anything? Will you ever set foot on Mars? Unless you're an astronaut or scientist, the answer is probably no, it won't help you."

"On the other hand, I guarantee you will set foot in the astral plane sooner or later." I pause for dramatic effect. "At the hour of your death. Like most people, you're probably content to be thrust--against your will (and when you're at your weakest and most vulnerable)--into that alien world, with no knowledge and completely unprepared for the journey."

A frown crosses their face, and I can only imagine what they're thinking right now. "No knowledge? Unprepared? Now waitaminute! I go to the church/synagogue/temple/mosque every week. I read the Bible/Talmud/Bhagavad Gita/Koran all the time. I pray every day. I have faith every day. I'll get to heaven."

"Yes, but all those books were written a thousand or two years ago, distorted by history and culture. They were written by people who thought the Earth was flat. The books were further warped by translations from different languages into English. And guess what? Everything they say about the afterlife was based on someone else's out-of-body experiences. But guess what? Knowledge trumps faith. You can see the afterlife yourself. Not only is this practical knowledge, it's also information you're going to need some day."

Their head goes quickly in the sand. "We're all going to die eventually anyway. There's nothing we can do about it, so why worry about it? We were all born into this world without any preparation, weren't we?"

I counter, "Yes, but can you imagine a child who is born with 20 years of Earth experience under his or her belt? They'd be another Mozart or Einstein."

They look skeptical. I can see the religious angle isn't working. That's okay, most people are closed-minded when it comes to their religion. I try another approach.

"Okay, let's talk about the practical applications. Imagine a world where the FBI has trained psychics that can use out-of-body travel to solve crimes or find missing or kidnapped children. That's a practical application. Imagine a world where no child gets abducted because criminals know they cannot hide and they'll be caught." I'm thinking of Marilynn Hughes and her Out-of-Body Travel Foundation, but I don't want to get too sidetracked.

I see a lightbulb go on above their head. Maybe I'm getting through this time!

"Imagine scientists flying out-of-body to Mars or other planets to see them firsthand."

"Imagine a CIA that has out-of-body psychics spying on terrorists. In the Bible, it talks about the prophet Elisha who did exactly that. He spied on his enemies and reported back their next day's battle plans." (2 Kings 6:8-14)

I see the wheels in their head starting to turn.

"Imagine you can fly out-of-body and talk to the subconscious minds of world leaders: the president of the United States, or the leaders of Russia, China, England, Germany, France, Australia."

I want to add "You could change the world!" but I keep my mouth shut. I've never tried to influence world leaders, so this is all pure speculation. Still, their mouth opens at the implications.

"Imagine giving hugs and saying last goodbyes after someone close to you dies, like your husband, wife, mother, father, son, or daughter."

Their eyes shift nervously as they start to see the potential, but I don't let them interrupt.

"Imagine being able to meet, talk to, and embrace religious leaders like Jesus Christ, Moses, Mohammad. Not praying to them, not having faith in them, but actually meeting them, shaking their hand."

"Imagine a world in which there are no holy wars and all religious differences are settled once and for all, because the scientists and theologians of all nations can all see the afterlife firsthand and agree where we're going after we die."

Their optimism quickly turns to skepticism and they frown. They say, "Do you do all these things?" but I can see it in their eyes: they're thinking, Yeah, right. This is all a load of crap.

My discourse trails off and I answer with one word: "Some." At this point, the futility of what I'm doing finally sinks in and I give up the battle. They want to stay asleep. They swallowed the blue pill.

This conversation never actually took place. I've had many like it, but they never get that far. They always pick the blue pill a lot sooner.

As I walk away, I remember a song by Kansas that has these lyrics:


"The answers are so simple,
and we all know where to look,
but it's easier just to avoid the question."

The song is aptly called On the Other Side.