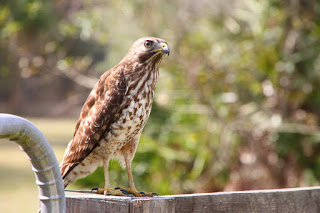 Something strange happened to me today. I was sitting on my computer, working at my day job as usual, when all of a sudden, a wild hawk flew down from the sky and landed outside the window. There are seven windows in the office, but the hawk chose the one next to me. There is 52 feet of fence, but the hawk chose to sit closest to me. In fact, the hawk was only ten feet away from me, and it just stood there and looked me in the eye.

I admired its beauty and tried not to move, so I didn't spook it. It turned and cocked its head a bit. I thought, That's odd; I wonder what it's doing. Then it occurred to me: it was listening to my music. The windows were closed, but I had the music kinda cranked, so you could still vaguely hear it outside.

Some days, when I'm working on something simple, I listen to music while I work. In this particular case, I was listening to the song Wishmaster by the band Nightwish. I've mentioned in other posts that I have a strange taste in music; here's another good example. Nightwish is halfway between opera and heavy metal, and the song Wishmaster is the first one I heard of the entire genre. I liked the song so much, I bought the CD. Then I bought all of Nightwish's CDs. Then I bought dozens of CDs from just about every band in the same genre of female-fronted metal: Epica, Within Temptation, Amberian Dawn, Coronatus, Warlock, Dark Moor, Stream of Passion, Edenbridge, Evanescence, Holyhell, Hydrogyn, Leaves' Eyes, Delain, Lyriel, Lunatica, Visions of Atlantis, Xandria, Amaranthe, you name it.

Now I'm not trying to extol the virtues of female-fronted metal; everyone has their own taste in music. In fact, there's a lot of negativity in that style music, and I don't want to spread that negativity. But there was just something about that one song--Wishmaster--that embodies how I like to think of myself.

The song itself is difficult to understand; I think the lead singer, Tarja, sang the song before she learned to speak English. :) It's about Lord-of-the-Rings style fantasy, and talks about Elves and such. That's not really important; I just like the music and the refrain. The refrain goes like this:

We're all masters, teaching one another. We're all apprentices, learning from one another. I like to think of myself as Heartborne: carried onward by my heart. I think to think of myself as a seeker. Having studied Tai Chi, Chi Kung, and the writings of Carlos Castaneda, Dan Millman, Ken Eaglefeather and others, I also consider myself somewhat of a warrior. I've studied the religions of the world, so I consider myself a disciple. And yes, even a wishmaster; one of the chapters in my latest book, Answers Within is about manifesting, so the title seems fitting.

As the hawk flew away, my inner voice said that the hawk came to remind me of who I am, which was all those things.

I'm here to remind you: you are all those things too.