Book review: Out of Body Experiences by Akhena

Review: Out of Body Experiences by Akhena 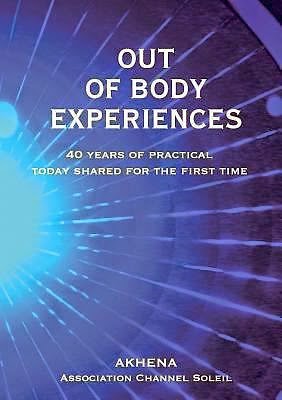 One of my facebook friends, Franck Labat, was kind enough to send me the book, Out of Body Experiences: 40 Years of practical today shared for the first time by a woman named Akhena. He described the author, Akhena, as the "William Buhlman" of France, and he was excited that her book had just recently been translated into English.

The first thing I noticed is that this is a big book, unlike most of the OBE books in my collection. This one weighs in at a hefty 410 pages. That's still nowhere near the 1248 pages of Waldo Vieira's book Projectiology, but it's still big. The font is average size, but there's enough white space so that you still feel like you're making good progress as you read. (Most American publishers would have removed all the white space to save on paper costs). Because the book is so big, there's a lot to talk about, so I apologize if this review gets too long.

First, you've got to overlook the occasional grammar and spelling issues, due to its translation from French to English. Yes, I'm a grammar Nazi and this goes against my principles, but the way I see it, I'd rather have a book in English than one in French as with C. Lancelin's Méthode Dédoublement Personnel which still hasn't been translated to English. The content is still solid, albeit a bit long-winded at times. It's a little rough at the start of the book, but it gets better: the majority of the book is just fine. Despite some simple mistakes, the translator has a good command of the English language.


Let's start by talking about the astral body. Some books claim that we have many non-physical bodies, each corresponding to different levels or planes of existence: The physical body, the astral body, the causal body, the Buddhic body, etc. Many books just state this as a fact, to be accepted with no evidence or experiences to support the claim. I think the worst offenders are the famous Theosophists Charles.W. Leadbeater and A.E. Powell. Akhena also believes there are seven bodies. She similarly teaches that the etheric body (or energy body) cannot be used as a vehicle of consciousness, whereas the astral body and others can. But at least Ahkena narrates several OBEs to back up her statements: OBEs in which she leaves her physical body, then leaves her astral body, eventually stripping off layers until she arrives at a higher-vibrational plane of existence where her spirit guides dwell. Call me old-fashioned, but I much prefer descriptions like Jurgen Ziewe's, where levels of reality are peeled back, rather than layers of bodies. Perhaps Ahkena's (and Theosophists') layers of bodies are just a metaphor for the same experience. Then there are more innovative approaches, like that of author Frederick Aardema, who writes about the effects of "body image" on our experience. It's a complex subject.

Akhena comes across as a wise and experienced OBE teacher, but I don't agree with everything she teaches. Let's start with the negative, and I'll talk about the positive later, because I want to leave you with a positive impression.

On page 79, while writing about the buzzing and the vibrations, she writes:


Don't panic. On the contrary, intensify your desire, concentrate on your objective, and the departure will take place.

I disagree: In my experience, the key here is to remain as passive as possible, or the vibrations will just fade away. Engaging your mind in any way tends to make the vibrations fade.

Similarly, I found this confusing at best: on page 61, while discussing the vibratory state, she states that:


An OBE will not occur unnoticed: the astral body's leaving is accompanied by sensations which are so strong that in general they awaken the sleeper.

This seemed contradictory to her other statements that we go out-of-body every night. She's probably just not being clear: In my experience, we're normally unconscious when this happens, so sensations like the vibrations won't ordinarily wake you up. I wish they did!

Another confusing thing: She states that the astral body is responsible for the function of the physical body. That seems wrong to me.

On page 125 she talks about astral hunger: I've never been hungry in a single OBE in 33 years of experience.

On page 127, she says that a hollow brick wall is easier to pass through than a solid wall. I disagree. For the most part, I think it's a matter of expectations, both conscious and subconscious.

This directly contradicts my experience: In my first book, I wrote about how I solved math equations in my head during an OBE in order to engage the left side of my brain, which helped me see more clearly. I've had experiences in which I was predominately left-brained as well as right-brained.

She also says that the astral body is, in her words, "immoral." On page 135, she talks about out-of-body sexuality:


It is like earthly sexuality but the most sensual imaginable, and without morals. The most faithful husbands (and wives) are surprised! Those who are chaste are as risk of blushing!!!

Robert Monroe wrote about promiscuous out-of-body sex, but these both contradict my experience and most of the literature. When I'm in an OBE, I don't have sexual feelings or urges. From what I know, this kind of uninhibited sexual activity comes primarily in lucid dreams, as opposed to "astral sex" which is more subtle and "spacey". It's hard to describe, but I would not describe it, as she says, "like earthly sexuality." It's more like a loving electrical discharge of a capacitor, or an merging and exchanging of energy, a or burst of mutual internal light.

Now let's talk about the good things. I don't want to give the impression that this book is bad. It has a lot of good information. Akhena obviously has lots of OBE experience and has a lot to teach us. Here are some of the topics where Akhena and I agree:
More things to consider:
Another thing I liked: She spends a lot of time giving examples of physical evidence to suggest that OBEs are "real". She gives several good solid examples where her OBE observations matched reality. This is something that's hard to find in OBE literature (Robert Monroe gives some, Graham Nicholls gives some, but as a rule, good evidence is scarce.) Akhena has plenty of good examples; many more than the typical OBE book. For example, she describes an OBE in which she unexpectedly finds a friend alone and terrified in a dark school room. She even sees writing on a chalkboard. The next month, she learned that her friend was, in fact, trapped for several days in a dark school room, buried under rubble after the 2004 tsunami. She didn't hear about it until the next month.

Another good thing: Akhena doesn't skirt issues. She is honest. She doesn't speak as the voice of authority, she speaks as the voice of experience. She sometimes asks tough questions, and then answers them honestly, whereas I don't always get that feeling from some authors. For example, she talks about something she calls "projections," which is not related in any way to the term "astral projection". What she means is this: When we're in an OBE (or a lucid dream), we can "project" our own beliefs and/or expectations onto that experience. Perhaps the more traditional term "thought forms" would have been less confusing. Here's an example: If, during an OBE, you call for your "spirit guide" and a Egyptian Pharaoh suddenly appears in your living room, is that really (a) Your spirit guide? (b) A projection / thought form you created out of your beliefs and expectations (whether conscious or not)? (c) an "ordinary spirit" trying to deceive you, or--to add another level of complication--(d) Your spirit guide superimposed with a "Pharaoh guise" that you've projected? She doesn't hesitate to ask these tough questions, and answer them honestly. She's not always sure, and honestly says so, rather than stating her assumptions as facts. I respect that. That's the hallmark of authenticity.

Unlike many OBE books, Akhena spends a lot of time talking about her spirit guides and her many interactions with them. There are numerous narrations here; more so than any other OBE book I've read.

She also narrates many OBEs in which she met and interacted with dead people. In many cases, these are people she knew in life. This is also uncommon in other OBE books, except for a cursory mention that it's possible. I have an account in my first book, and there's a bit of it in Michael Ross's book, but other than that, none immediately come to mind.

This book has some interesting twists that aren't found in the average OBE book. For example, she wrote about trying to cut her own silver cord, in an attempt to see if it's possible, and to learn about death (No, she was not suicidal; just curious). She was unsuccessful, but the only other narrative I can recall from the literature like this is from my own first book where I described an amusing episode of extreme silver-cord tug-of-war.

Okay, let's talk OBE technique: What does Akhena bring to the table that others don't? One of the most important things she talks about is programming your subconscious with a "trigger mechanism." For example, you'll say to yourself, "As soon as I go to sleep, I'll turn on a light. If it doesn't turn on, I'll know I'm out-of-body." This is a lucid-dream shortcut: it bypasses the vibration stage. You just need to develop the habit.

Also, like author Robert Bruce and the IIPC/IAC, Akhena uses energy work to activate the kundalini energy to flow through the chakras. She gives energy techniques, not unlike the IAC's "Velo" technique, coupled with special breathing. Her teachings are based on sending the energy of the root chakra (which she calls "The Fire") up through the spine, to the third-eye (which she calls "The Diamond").

I'll give the book a Thumbs up. There's plenty of good information and good narratives. She has the knowledge, the experience and the integrity. At times, the narrative is a bit tedious, but I was never bored.

Click here for an index to all my OBE book reviews.