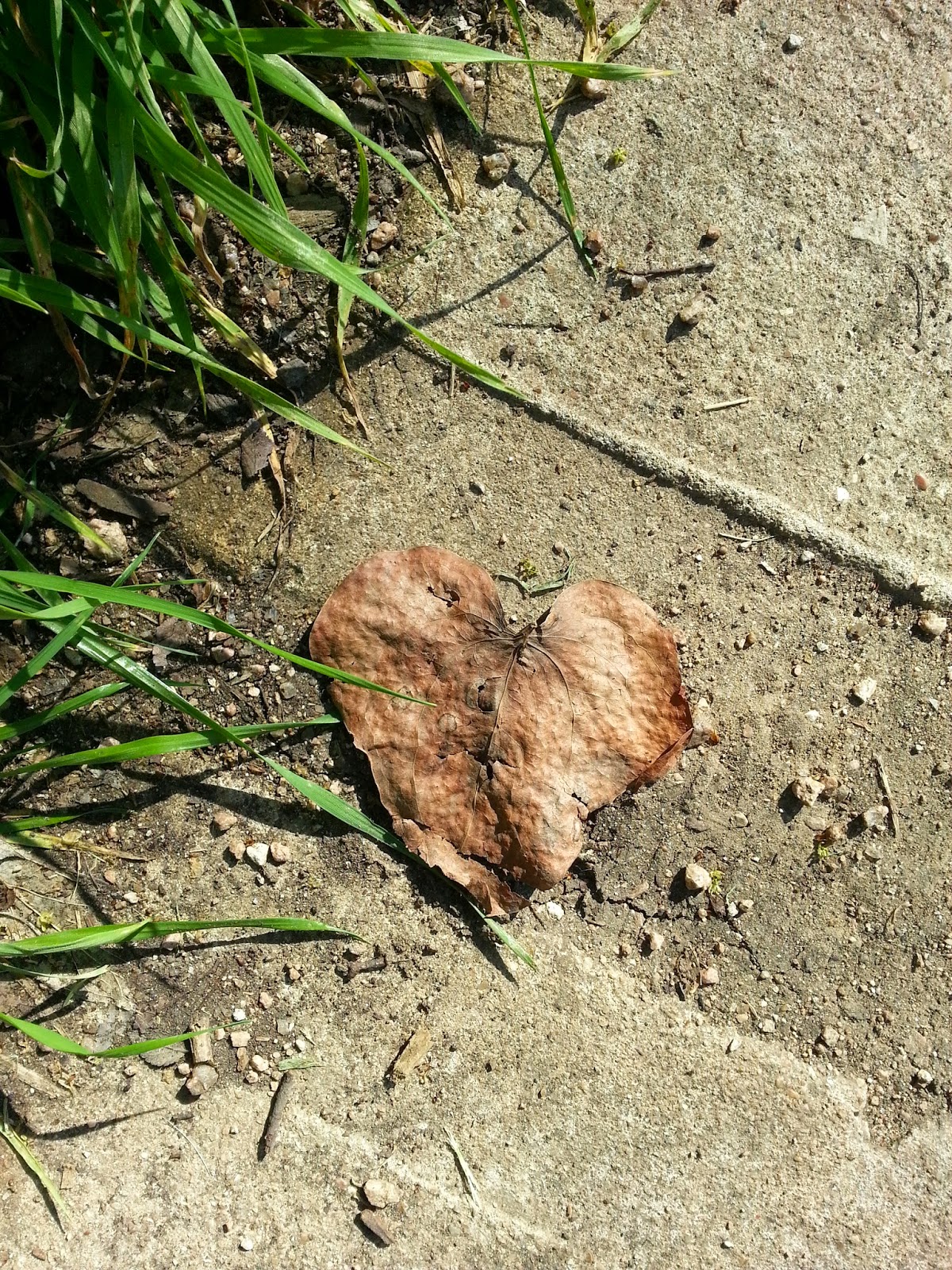 Today after work, I decided to mail some bills. As I was leaving the apartment, my inner voice said, “Lock the door. You should take a walk.” I locked the door and went to the mailbox to mail the bills. Afterward, I started heading toward Brushy Creek park.

I thought, Well, I suppose I could use the exercise. I asked my inner voice, “Where am I going?” It responded, “Your assistance is needed.”

When I got to the path, I asked, “Which way? Right or left?” It said, “Right. Then over the bridge, past the skate park, down the right-hand path. Then circle around the park counterclockwise. Not down by the creek; stay on the sidewalk.”

So I walked. Twenty minutes or so later, I turned the corner and saw a small leaf on the sidewalk. It was heart-shaped. My inner voice said, “Love is everywhere. People just don't see it. You don't see it often enough.” I stopped and looked at the leaf. It was unusual; not like one of the nearby trees, but from a lily from the nearby creek. What was it doing here?

I kept walking. A couple hundred feet later, I saw an old man (in his eighties?) with a bright pink kid's bicycle, overturned. As I got close, I saw that the chain had come off the bike. Another man was trying to help him, but was unable to feed the chain back on the bike because a plastic chain guard was in the way.

I pulled out the handy leatherman tool from my pocket and unscrewed the plastic guard and removed it. The younger man held the bike while I fed the bicycle chain back on. Then I tightened the wheel so the chain wouldn't come off again. Next, I put the plastic chain guard back on and screwed it down tight.

The old man was very grateful and thanked me. He said, “I stopped carrying tools many years ago. Thank you so much.” He called his granddaughter from the nearby playground and soon they were on their way.

As I walked away, I asked my inner voice, “This was all a setup, wasn't it? The walk, the heart-shaped leaf, and everything.” It sent me an inner smile and said, “Service where service is needed.” I've heard that many times from it in similar “errands.”

I scolded myself. “I should have taken a photo of that leaf.” My inner voice said, “Want another? I'll give you a better one.”

Ten minutes later, as I walked back toward the apartment, I saw another, bigger heart-shaped leaf on the sidewalk. This time I took a photo of it and smiled.