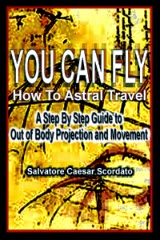 This time I'm reviewing You Can Fly: How to Astral Travel: A Step By Step Guide to Out of Body Projection and Movement by Salvatore Caesar Scordato. This review is long, but that's because the book is informative and has a lot to talk about.

My first impressions were from the cover. There's a photo of the author on the back that reminded me of Severus Snape from the Harry Potter books: wizard extraordinaire and teacher of defense against the dark arts. You be the judge:

Maybe it's a cultural thing, but I guessed that the author was going for a certain mystique, and he nails it. Throughout the book, he comes across as a teacher of the art of astral travel, but he doesn't really say how he acquired his knowledge, except through experience. However, he's not overbearing or arrogant at all. He's not an occultist or a magician (as far as I know), but he is a pretty decent OBE teacher.

The book is 166 pages (not counting promotional pages at the end of the book) and the margins are small, which means there's a lot of content (that's a good thing). Almost all of the book is dedicated to teaching you--the student--how to do astral projection. In that regard, it's kind of like a classroom book. Although I disagreed with Scordato on many of his points, his methods and techniques seem pretty good.

The positives of this book outweigh the negatives, so I'm going to talk about the negatives first. The worst thing about this book is the grammar: not just minor rookie mistakes, (like its vs. it's or changing tense) but missing words, incorrect words and combined sentences. Mr. Scordato really needed a proofreader. Badly. There are so many grammatical problems it was distracting, at least for a grammar Nazi like me. The mistakes were much worse than Akhena's book, which I had previously complained about. After a few chapters, I started playing a little game: count the number of major errors on each page. Most pages had two to three major grammar problems, but I counted as high as six. I only encountered one or two pages where I did not spot a problem. Enough said: I don't need to harp on it.

The second negative is that the book didn't have any OBE narratives. The author spends a lot of time talking about how you can use OBE to unlock the secrets and mysteries of the Universe (in fact, he's a little redundant on that topic), but he doesn't give any examples of what he's seen or done.

Those are the only two complaints I have about the book. That's not to say I agreed with him on everything. In fact, I found several points of contention. But disagreements are healthy, right? They make for a good healthy OBE discussion. So let's talk about some points of contention.

Early on he talks about what astral projection is, planes of existence, as many books do. On page 41, he has a diagram of the Universe that shows three levels (As opposed to the traditional seven), corresponding to the Christian concepts of the Trinity: The Earthly plane (the Son), the Astral Plane (the Holy Spirit), and the "Greater Physical Realm" (The Father). His diagram shows God residing outside these three levels. He never does explain the Greater Physical Realm or what it is. I tend to think of "creation" as being more multifaceted and multidimensional (as per Ziewe's Multidimensional Man).

Second, he talks about exploring the Universe, but being limited by the speed of light, which contradicts a lot of other OBE books. This had me concerned, but later in the book he amended this by talking about advanced methods of astral travel where you can fold space, and thereby go anywhere in the Universe. (However, this is not taught in the book). None of the other books in the genre talk about folding space or needing to do so.


"Of course when I say this is limited only by the laws of this universe I mean that you can not travel outside this plane of existence into the spirit or after life plane." (pg. 23).

A multitude of OBE books beg to differ. He reiterates this later on:

That seems to fly in the face of many other OBE books. Fourth disagreement:


"...And that God does not exist within the same universe but outside this plane of existence." (pg. 25).

I tend to believe that God is everywhere, as an integral part of all creation, at all levels.

Fifth disagreement (the grammar mistakes in the quotes are his, not mine):


"What is the Astral Plane? I will not dispute what other people's perceptions and theory's are about what the astral plane is and where it exists? What I will do is tell you what I know to be the facts."

"The first firmament about the Astral Plane is that subsist within our Earthly Plane of existence. It is not another dimension but rather an extension of our dimension much like how our souls exist within our bodies and we live inside a house." (pg. 38).

After his discussion of the dimensions, the book gets better. He talks about the benefits of OBEs: How it opens and expands your mind, opens your creativity, gives you better understanding of the Universe, etc. I agreed with most of that discussion.

Next, he gets down to OBE instructions, which takes up the rest of the book. On page 52, he talks about "Morning Commands" which are basically OBE affirmations done at the very razor's edge of consciousness when you first wake up on the morning. He recommends refining this until your affirmations are your first thoughts of every day. A lot of books recommend affirmations. I wrote about how important it is to do them in the early morning (especially in Answers Within) but Scordato takes it to the next level, and I liked what he wrote about it.

I disagreed with him when he wrote:


"The disorder that is commonly called Sleepwalking is really not a disorder at all. It is the trapped soul attempting to leave the body." (pg. 62).

In my opinion, sleepwalking is a physical disorder caused by a malfunction in the normal sleep paralysis process.

Next point of contention:


"Ghosts are believed to be the souls of the dead who have irreconcilable troubles or concerns or deeds. But the fact of the matter is that all dead spirits can not return to this plane of existence in spirit form. That door is shut and no matter what anyone has put forth as to prove the existence of Ghosts, None can be proven. They simply do not exist." (pg. 64)

As a paranormal investigator, I have to disagree with this too. I've seen too much evidence of ghosts to make such a blanket statement.

Again, I disagree. Although it's rare in the literature, there are cases of using hypnosis to induce an OBE state. Way back in the 1980s, Dick Sutphen was peddling OBE hypnosis tapes. Some would even call some of the Monroe Institute's products a form of hypnosis used for OBE.

Now let's talk about something more positive, shall we? Let's talk about Scordato's technique. This is where the book really shines, even though he describes only one primary OBE technique. It's primarily a visualization technique.

First, he talks about relaxation. Many books casually mention in passing that relaxation is the most important part of OBE induction, and I have to agree. Scordato emphasizes this better than most books. He recommends spending 30 days practicing nothing but relaxation and taking it to an extreme degree, using candles, music, bath salts, massage, massage oils and massage chairs, white noise machines--even masturbation--to learn how to achieve the deepest possible level of relaxation while still retaining consciousness. It's a good discussion, and treated well.

Next, he talks about learning to visualize a tunnel with a tiny dot of white light at the end, as often described in NDE (Near Death Experience) books. This is a pretty basic OBE visualization, but he insists you keep practicing it until your visualization is flawless.

Next, you visualize yourself walking slowly down the tunnel, toward the light. It's important not to visualize the light coming to you, but see yourself going toward it.

Next, he talks about dream awareness (lucid dreaming) and how to assume conscious control in your dreams by commanding your dream self to make a noise, grunt, or vocalization.

He also talks about WBTB (Wake-Back-To-Bed) although he doesn't call it that.

He talks about programming your dreams by falling back asleep (after you wake up) while saying to yourself, "I have fallen back asleep."

Although Scordato has some good ideas and a solid technique, I disagree with him when he wrote:


"This image of a dot of light at the end of a long circular tunnel is the key and essence of everything you have been trying to master. Think of this combined image as the magic words that will unlock the universe and all its dimensions to your commands. Without being able to create this image, you will not be able to leave your body." (pgs. 105-106).

I like his tunnel visualization, but I think he's giving it a bit too much importance. There are a lot of techniques out there, and every out-of-body traveler has different needs. I personally find that movement (imaginary floating coupled with a visualized object that is swinging) is the most important factor. But I definitely plan to try the tunnel visualization.

In his questions and answers section, he writes:


"Will I remember everything I encountered and will encounter on my journeys?"


"Yes, vividly. All the experiences you thus far been through will be forever etched into your memory." (pg. 118)

This directly contradicts Robert Bruce and other experts who insist that OBE memories, like dream memories, can be fleeting and learning to recall them (or "download them" as Bruce says) is an important key to having OBEs. However, other experts (for example, psychologists Gabbard and Twemlow in With the Eyes of the Mind) insist that OBEs stand on their own as very memorable: There's something memorable that sets them apart from ordinary dreams. My OBE memories have never been fleeting, so I'm siding with Scordato on this.

Scordato has some unique ideas. I don't agree with everything he says, but he's got some pretty good instructions, tips and techniques. I'm giving this book a thumbs up, despite the awful grammar.