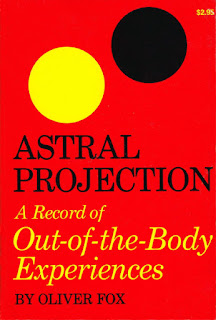 Every now and then I like to go back and re-read the classics in out-of-body experience (OBE) literature. This is one. This is probably the second or third book I ever read on Astral Projection, so I didn't remember anything about it.

It's unclear to me exactly when the book was written. The earliest copyright date in my copy is 1962, but Fox's earliest written articles about his OBEs appeared in Occult Review in 1920 and his OBEs were from around 1902, which predates even Sylvan Muldoon's OBEs. Some might argue Muldoon was the first, but while Muldoon's book may have preceded Fox's, I think Fox's articles in Occult Review preceded Muldoon's classic 1929 book The Projection of the Astral Body.

Back then, OBEs were considered so far beyond the norm that authors often hid their identity lest they be ostracized. OBEs were considered so rare that only a handful of people in the world had ever written about them: two Frenchmen named Charles Lancelin and Marcel Louis Forhan (who wrote under the pen name "Yram") and "Oliver Fox", whose real name was Hugh George Calloway. Fox/Calloway was really the first guy to write about it in a somewhat scientific fashion. In other words, Fox didn't try to make it out to be some kind of esoteric occult super-power. Like Muldoon, Monroe, Buhlman, and other good OBE reporters, Fox just reported what he had experienced, and advanced theories about it. Although he studied Theosophy, the book doesn't really digress into occult beliefs. In fact, near the end of the book he says:


"So hard it is to kill the sceptic in me, nor do I want to altogether; for scepticism is very useful as an aid to preserving mental equlibrium." (pg. 157) [The British spellings are his, not mine.]

The first thing that struck me about this book is something I don't recall reading in any other OBE book: a nightmare from Fox's childhood that is eerily similar to one from my childhood. Here is Fox's description:


"I dreamed that my grandfather and I were sitting at the supper-table. Suddenly he took a threepenny-bit [coin] from his pocket and held it between his finger and thumb across the table for me to see. 'A little threepenny-bit!' he exclaimed, 'but it will grow and grow and grow and nothing can ever stop it!' His voice grew steadily louder until it ended in a scream: 'It will grow and grow and grow until it cuts the world in two!' Now, in my dream, though the threepenny-bit did not increase in size, something in me seemed linked with an invisible coin and was being stretched as it grew larger and larger in obedience to my grandfather's horrible monologue. There was the same awful sense of inevitability and helplessness, ending in panic. I echoed his scream, and that broke the nightmare." (pgs 16-17)

Compare that to my own childhood nightmare:


"When I got sick, I only remember a strange sensation that used to terrify me: When I drifted off to sleep, I had a terrifying "nightmare." I would "dream" that I held a tiny grain of salt in the palm of my hand. Then my consciousness would shrink to a terrifyingly small size until the grain of salt looked like a skyscraper. Terrified of being crushed by the salt, I would wake up screaming." (Out of Body Experiences, Peterson, pg. 10)

One of the earliest OBE pioneers, Fox discovered three different methods to induce out-of-body experiences:
Although most of the book is centered on Fox's OBE narratives, he does give several pieces of advice for inducing OBEs (although not as much as some books, for example Jonas Ridgeway's Exploring Your Inner Reality which I previously reviewed.) The book is very similar to Robert Monroe's first book, Journeys Out of the Body in that respect.

Fox's advice for lucid dreaming ("dreams of knowledge") is basically this:


"Before going to sleep I must impress upon my mind the desirability of not allowing the critical faculty to slumber; it must be kept awake, ready to pounce on any inconsistency in the dream and recognize it as such. It sounds simple; but in practice I found it one of the most difficult things imaginable." (pg. 34)

As for the Pineal Doorway method: he basically just vividly imagined his entire awareness is concentrated in the pineal gland. [The pineal gland is a tiny gland in the center of the brain, which produces melatonin, a brain drug related to sleep. It is the size of a pea, and shaped like a pine cone.] He found that if he did that long enough, his entire awareness would suddenly whoosh up and seemingly go through some kind of doorway, after which he had incredible clarity of consciousness. But this method came at a cost:


"Until one has become accustomed to it, the actual process of passing through the 'Door' in the pineal gland produces an effect of extreme mental confusion and a terrible fear. Indeed, one feels that one is heading straight for death or insanity." (pg. 87)


Eventually, this method stopped working, though he tried many times over the course of ten years. Some people in OBE circles talk about the pineal gland and its supposedly magical properties. There are even products designed to "decalcify" the pineal gland [calcium buildup in the pineal gland over time is well known in the medical world, but I don't I buy into these; don't waste your money]. Fox doesn't let occult beliefs cloud his discussion:


"The reader is warned not to take my statements on the pineal gland too literally; indeed, if it please him, he is welcome to look upon the Pineal Door as purely imaginary; but, at least, this conception forms a very useful aid to a mental exercise which undoubtedly leads to a new form of consciousness--even if the [astral] projection theory is rejected. The result I obtained is beyond all question; but my explanation of the actual process involved may be more symbolical than accurate." (pg. 76)


The third method is the "Instantaneous Method" which is more like traditional methods of inducing OBEs: The use of active imagination to trick your awareness away from the body. This would include Robert Bruce's "Rope" technique, William Buhlman's techniques, and many others, mine included.

Another thing that's very interesting is that Fox learned to detect when his body was calling him back, and resisted that call, especially from lucid dreams. As he fought the pull of his body, he'd feel a pain in the center of his forehead. The more he fought, the worse it became:


"I fought against my body by steadily willing to remain in the Dream World. The pain in my forehead gradually increased, reached a maximum, and then, to my delight, suddenly ceased. As the pain vanished, something seemed to "click" in my brain. I had won the battle. My body pulled no longer, and I was free." (pg. 38)

But then he discovered a terrifying consequence: He couldn't reanimate his body again! Well, at least not for some time. Eventually it was like Sleep Paralysis sufferers: the body eventually woke up and pulled him back in.

Another noteworthy thing is that Fox talks about "skrying" but he has his own interpretation of what that means. To most occultists, skrying means something akin to crystal ball gazing (for example, see Donald Tyson's book Scrying for Beginners). To Oliver Fox, it meant shooting into space like a rocket, in an out-of-body state.

Another interesting topic is that of projecting while in bed with someone. I've always found it extremely difficult (but not impossible) to induce the OBE state from my bed if my wife is sleeping beside me. William Buhlman has told me the same thing. But Fox didn't seem to have any problem with it at all.

The book also has some of the earliest descriptions of pre-OBE symptoms, and good advice on how to deal with them:


"There may also be flashes of light, apparitions, and (almost certainly) terrifying noises. He may have the illusion that someone is trying to wake him or dissuade him from making the adventure. He should tell himself that such apparitions are subject to his will and powerless to harm him; and he should disregard any interrupting influence--even if it seems to proceed from his wife!" (pg. 127)


The writing is very eloquent and flowery; the polished work of a seasoned writer. In fact, Fox tried to make a living as a writer, but was never very successful.

The book is 160 pages, but with large margins. So there's a decent amount of content. It's not as good or as long as the books in my top ten list. But it's a classic, and an important look into OBE history; a "must have" for all serious OBE book collectors like me.