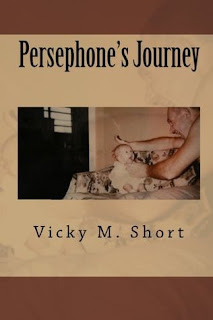 Sorry it's been so long since I posted last. I've been taking some time off to enjoy the summer, visit with family and friends, and work on some of my projects, like my stained glass art. I've only squeezed in little bits of time here and there for reading.

This time I'm reviewing Persephone's Journey by Vicky M. Short. The author was kind enough to send me a copy, and I feel really bad that I haven't finished it until now. This is another long book review (sorry!), which is usually a good sign that I like a book. And yes, I loved this book.

This book took me back to a special place: It reminded me a lot of the first book I ever read about psychic experiences (aside from the OBE books) way back in the early 1980s: The Clairvoyant by Hans Holzer, the story of a young psychic girl who struggled because she was different from "normal" people.

Anyone who's read a few of my reviews knows that I love narratives; especially OBE narratives. Persephone's Journey has a lot of narratives. In fact, that's pretty much all it is; one after another, and not in chronological order. They're ordered by a theme. To illustrate the theme, most of the narratives have notes with lessons learned from the experience. For example, in chapter 10, "The Nature of Out of Body Experiences", contains an OBE with this note that I liked:


"NOTE: My framework concept is the idea that going "out of body" is simply a matter of mentally releasing yourself from the framework of physical reality. With this concept I realized something about myself that I didn't know--that I had a lifetime of belief surrounding the false notion that consciousness was contained within the physical body, and leaving the body meant releasing consciousness' grip on it. Relaxing that mental hold essentially released me from physical reality to nonphysical reality, allowing me to merely go from one framework to another. I didn't actually "go" anywhere in terms of spatial location. Based on my experience, the sensation of out-of-body movement is an interpretation of the mental process of releasing focus of awareness from one area of consciousness to another." (pg. 237)

Many of the more interesting OBEs contained verification and often, deja vu. In an OBE, she would witness an (ordinary) upcoming event. Later, she would experience that same event in real life, as deja vu.

They're not all OBEs, however. In fact, most of the narratives aren't OBEs at all. I'd say only about a third of them are actual OBEs. The other two thirds are other psychic and/or paranormal experiences from the author's life. They range from simple stories like finding lost items for her siblings, to "ghostly" tales from when she lived in a home with paranormal activity.

Soon after Vicky became interested in OBEs and started pursuing them, she met Bruce Moen, a fellow author who wrote several books on soul retrieval ("Exploring the Afterlife Series" from my publisher, Hampton Roads Publishing) based on his "focus level" training at The Monroe Institute. I read them several years ago (and liked them). Even though Moen's experiences were not classical OBEs, there was enough of a connection to get Short hooked:


"What surprised me was that Bruce [Moen] wasn't writing about classic out-of-body experiences like I was expecting: what he was describing was much simpler than the OBE, along with his explanations of nonphysical reality." (pg. 126)


In an excerpt from Moen, she explains:

I like to think of it as a continuum of consciousness. More on this later.

Most of this book centers around the author's friendship with Moen. Short had psychic experiences all her life, but when she met Moen, it changed her focus. He became her close friend and guide. He even wrote the book's Foreword. Before meeting him, she had random experiences. Moen gave her training, direction, and focus. Unfortunately, her skeptical husband, Dustin, didn't see it that way. I got the impression he thought it was all hogwash, which meant he was not supportive or understanding, even when confronted with blatantly obvious confirmation of psychic phenomena. Although Short never actually said it, Dustin was probably also jealous of Moen, who provided the emotional support she needed. Eventually, their fundamental spiritual differences led to divorce, but luckily she believed in herself and her experiences. (And I hope she always will.)

One of the great strengths of this book is that Vicky Short is a good story teller. She's also good at explaining things. She tells it like it is. She explains exactly when she's having a classical out-of-body experience versus when she's having more like a "focus level" experience. Or any other psychic experience. She describes her "inner voice" this way:


"When I say I heard the thought, that's exactly what I mean. I didn't think it. I heard it. Sometimes my thoughts are that way, projecting in my mind as if someone else was saying it. I've come to call it The Voice because it's more accurate than calling it a thought. Thoughts are my own thinking. The Voice knows things I don't know. I actually thought back to it in response..." (Introduction)

Like me, she even argues with her inner voice, and she agrees with me that:


"My personal belief is that The Voice originates from my higher self, giving me suggestions and help from another aspect of myself. I refer to it as Guidance." (pg. 185)


She also does a stellar job of explaining OBE memory problems. Whereas some authors like Robert Bruce theorize about "downloading" memories from the astral to the physical (which I've always questioned), Short gives a much more plausible explanation. Here's a small excerpt of a much larger discussion:

"These were important tools to remember during my retrieval, for several times I would get lost, losing the balance of Perceiver and Interpreter. I found it very easy to go back into the experience simply by remembering what I had just been seeing and feeling. It brought me right back to where I had been nonphysically and opened my perception there once again." (pg. 141)

Here's another explanation I found insightful:


"Bruce explains that the imagination is a sense of perception. Whatever we perceive in our imagination can be anywhere along a Continuum of Information where Fantasy is at one end and Reality is at the other." (pg. 151)

She goes on to say:


"...If you shift your attention along the continuum toward the other end, you will be perceiving within the realm of reality..."

"...We could say that by actively pretending or fantasizing, we are sort of tuning into our nonphysical senses. We know that what we perceive when we are actively pretending or fantasizing is not within physical reality, but even though we know we are actively using imagination in this way, what we are really doing is activating the use of our nonphysical senses of perception. And that opens the door to sensing beyond physical reality." (pg. 152)

In Exercise 4 ("Pretend Day") of my first book, I wrote about the importance of using and developing your imagination to learn to leave your body, so I really liked her take on the matter. However, this is not about fantasy. It's about perception. She also says:


"...Bruce [Moen] explained that gathering verifiable information is a critical part of opening our perception of the Afterlife and other nonphysical realities. He said that our beliefs that conflict with the existence of such realities can actually block our perception of those realities." (pg. 153)

Which sounds like it came straight out of Jane Roberts/Seth, which I also like. And perception goes back to experience, whether physical or nonphysical:

Wow. I love that. Well said. But maybe the most valuable take-away I got from this book is the following quote:


"The most important thing I'd learned from Bruce was the importance of feeling love, and that raising awareness through love opened perception way beyond its normal limits." (pg. 199)

That simple quote really hit me hard and stayed with me for several days. Later in the book she writes:


"Since then I've figured out through my own personal experience that what Bruce teaches about love is very true--Love raises our awareness and opens our perception. Bruce always says that if he could teach only one thing it would be feeling love." (pg. 263)

She echoes the same sentiment at the conclusion of the book:


"What these experiences have taught me is that sensing spiritual energy, experiencing pure unconditional love, and my spiritual connections with others are the most important things in life. These experiences open the door to reminding me who I truly am as a spiritual being and how we are all connected." (pg. 271)


You won't find any OBE tips or techniques in the book. That makes for an entertaining journey, but it leaves people like me--who really have to work hard for it--wanting to know more about how to do it ourselves.

The book is 271 pages, with good margins and decent size: it's a good amount of information, so you won't feel short-changed. The writing is mature, professional and polished. It's not perfect, but way better than most. She's a great writer. Not just good, but great. She's got what it takes and I hope she writes more books.

I loved this book and give it 4 out of 5 stars. Big thumbs up.