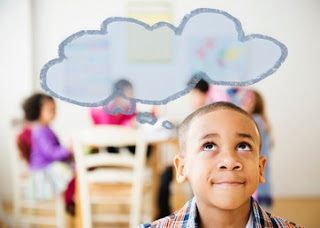 Before I get too far, I just want to make it clear (as I have before): These are only my opinions, but they're based on a lifetime of OBE research.

Do you want to induce an out-of-body experience? Have you spent a lot of time and effort trying, without success? You might be able to improve your technique if you understand the technical details of the active imagination and how it can be leveraged to induce OBEs.

First, imagine this conversation with a skeptic:

It's not both. First, let me be clear:
So what's the connection between your imagination and the actual experience, and how do I explain it to the hardened skeptic who doesn't believe in a soul?

Imagination is merely a device to trick your brain into the OBE state.

Here is a detailed technical description:

#1: The brain responds to imagination as if it is reality

The first thing to understand is that your brain and body respond to imagination as if it was reality. This is most easily demonstrated when you dream. (It's been scientifically proven that everyone dreams, but it's common to not remember them without effort and training). When you dream, your sensory information comes from your subconscious imagination. It's a self-created fantasy or hallucination from your subconscious. Still, your body responds to those imaginary events as if they're real. If you dream of being attacked, your heart rate increases, your blood pressure rises, your breathing gets faster, and you naturally have a "fight or flight" response. All this is despite the fact that it isn't real. This is universal mammal behavior. My dog Spirit often wags her tail, barks, growls, or whimpers when she's dreaming.

#2: The brain's TPJ determines location from a consensus of sense data

The second thing to understand is that your physical body has five primary physical senses (sight, hearing, smell, taste and touch), and some neuroscientists believe your sense of spacial location is determined by a region of the brain called the right Temporo-Parietal Junction, or rTPJ or just TPJ for short. This is where the temporal lobe meets the parietal lobe of the brain. The TPJ manages and coordinates a consensus of information gathered from the five senses. It tells you your current location.

Scientists like Olaf Blanke, Michael Persinger and Stanley Koren have been able to fool a subject into thinking he or she is located outside their body by disrupting the TPJ with mild electrical stimulation, which interferes with its ability to analyze the sense data to form a consensus.

#3: Your brain's TPJ can naturally switch your perceived location

The brain can easily adjust its perceived location. Again, this is easily demonstrated with dreams. When we are in a normal dream, we think we are at a different physical location. Your brain has flipped a switch to think it is at a different location.

#4: The TPJ only needs data from two of the five senses for a consensus

The TPJ only needs sense data from two of the five senses to form a consensus of your location. Scientists have actually shifted the TPJ's location consensus by feeding it false data from two senses: sight and touch.

What they did was use virtual reality (VR) to feed false visual data to the sense of sight. At the same time, they force a displaced sense of touch.

For example, using a camera and computer, they show you (in VR) a displaced version of your own physical body. Then they show that displaced body image being touched while simultaneously touching your physical body at the same spot. With data from these two senses, the TPJ immediately forms a new consensus and forces your location to be displaced.

#5: Extreme relaxation cuts off sensory data from the TPJ

When you prep for an OBE, you stop moving, relax, and make your senses quiet. Only a trickle of sensory data gets to the brain, and it's all uniform, so the brain becomes numb to it. Your eyes are closed, so your brain gets a uniform gray signal to its visual processor. You try to eliminate all sounds (or use a uniform sound) with ear plugs to cut off all sense data from your ears. You don't eat, so your taste buds are not sending any data. You're comfortable and relaxed, so your brain's sense of touch is minimized too. Your sense of smell is cut off or kept uniform (e.g. with nothing, or with incense) as well.

So when you prep for an OBE, your TPJ doesn't have "much" sensory data with which to form that consensus about your spatial location.

#6: Your brain creates a "story of experience"

The brain builds a virtual world which you interpret as your "experience." In other words, you are pretty much watching a three-dimensional movie of your experience. This is true for waking, dreaming and out-of-body experience.

Connecting the Dots: What Imagination Does


Without much proper sensory data to use, your TPJ can't form a valid consensus about your location to apply to your "story of experience." When you use your imagination, you feed the TPJ with imaginary sense data, which is almost as good as the real thing. It overrides the consensus and instructs the TPJ to flip that switch.

Inducing an Out of Body Experience

Now, armed with this knowledge, let's put it to good use and induce an OBE.

Step 1. With a combination of extreme relaxation and sensory deprivation, you starve your TPJ of all sense data.

Step 2. With OBE exercises, you use your imagination to feed the TPJ imaginary sense data so that it deliberately misinterprets its spacial location. You use your imagination to pretend you are:
Armed with only imaginary sense data that's been given enough intensity, the TPJ decides that your spacial location is not in the same location as your body. Once the TPJ forms a new consensus about your (imaginary new) spacial location, it creates a new "story of experience," and voila: You're having an out-of-body experience.

From an experiential point of view, you accomplished your goal: You tricked your TPJ, and no longer need to use your imagination. Now you just perform normal actions in the OBE until the TPJ decides to form a new consensus based on more data. (For example, the phone rings, providing auditory data which causes the TPJ to form a new consensus.)

Does this mean it's all a trick of the brain?

Certainly not. That hasn't been proved or disproved.

Scientists haven't proven whether or not something really does leave the body and interacts in some kind of alternate reality. Attempts to prove one way or another have met with mixed success. For every documented success, there's a documented failure. I documented many cases of both in a chapter in Consciousness Beyond the Body edited by Alexander DeFoe. One thing is for sure: more scientific research is needed.

What we can say is that to the experiencer (or subject) him/herself, this is a conscious experience, and it feels very real.

Armed with this new knowledge of how it works, you can now focus on how to properly use your imagination to force the TPJ into a new consensus location, and poof: you'll be out-of-body.