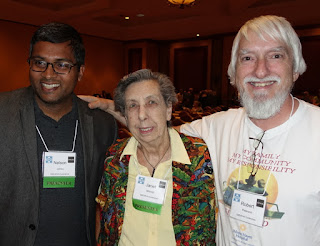 About a month ago, in early May, Kathy and I were in Las Vegas. We had been invited by her parents to stay at their timeshare, and it wasn't too far out of the way for us as we drove home from Arizona.

At one point I was standing in the middle of South Point Casino, waiting for her parents to arrive, and decided to check my Facebook. That's when I found out one of my friends, Nelson Abreu, was planning to attend a conference that looked very interesting: Right up my alley. It was hosted jointly by the SSE (Society for Scientific Exploration) and IRVA (International Remote Viewing Association). So I checked out the invited speakers. When I read that Hal Puthoff would be speaking, I said something like, "Wow" and Kathy asked why. I told her about the conference. She hasn't read many books on parapsychology, so she wasn't familiar with Dr. Puthoff or his work.

Kathy asked, "Where is the conference?" I looked it up. "South Point Casino. The same casino we're standing in right now." She asked, "When is it?" "About a month from now."

When I read further down the conference schedule, I said "Wow, Stanley Krippner is speaking there too!" Then, like a one-two punch, I said "Oh my God, Janet Mitchell is going to be there too!"

For those of you who don't know, Dr. Mitchell is a pioneer of the scientific study of psi phenomena, including OBEs. She's done scientific laboratory work on famous OBErs like the late great Ingo Swann. Her classic OBE book, "Out of Body Experiences: How science is helping us to understand the experience of living beyond the body" was one of the first OBE books I read (along with Monroe's), that wasn't occult in its approach. It made a big impact on my life because it immediately appealed to my logical/scientific mind. Back in the early 1980s, when I was first learning to do OBEs, I couldn't find a copy of her book, so I had written to her publisher. Many weeks later, I received a copy, signed by Dr. Mitchell herself. Her inscription read:


"To Bob Peterson, Realize your potential; express your abilities. Thanks for your support. Dr. Mitchell."

I was beyond thrilled. The only thing that ever came close again is when I found out that Charles Tart (Yes, THE Charles Tart) had written the introduction to my (first) book. I just about died. But I digress...

Kathy said, "I think we should go!" So we purchased a week from her mom and dad's timeshare for June, and went to the conference. It was outstanding. I just returned from Las Vegas yesterday, and I wanted to give my report.

The conference started on Wednesday June 6 and ran through Sunday, June 10, 2018.

I had just finished reading Susan Blackmore's latest book, "Seeing Myself: The New Science of OOBES" and I was a bit disheartened by her skepticism (I'll publish a book report on that in my next blog article). Blackmore was trying to explain away all OBE phenomena as strange anomalies of the physical brain. But suddenly I found myself at this conference, surrounded by nearly 400 engaged people, most of whom are dedicated scientists, and they're discussing OBEs, Remote Viewing, UFOs, Remote Healing and such like it's a given. For me it was like the Universe countered Blackmore's negativity with a huge 100X positive response. I've never before been in a room with such a large group of scientists and authors who are rationally discussing things like Chakras, Qi, and Remote Viewing. Not just discussing, but presenting scientific papers, data and statistics, methodologies, and analysis to back up their claims. Just unbelievable.

As you can imagine, many of the talks were related to remote viewing, but several others stand out in my mind. I didn't record any of this, so forgive me if I screw up some of the minor details:

Before the conference, I had posted a photo of Dr. Mitchell's inscription on my Facebook page, and author Graham Nicholls posted this:


"If you see her please give my regards, that book changed my life. I would love to connect with her actually."

I relayed Graham's message as well as my own thanks for her long and amazing career. After her talk, Kathy took the above photo of Nelson Abreu (left), Dr. Janet Mitchell (center) and me (right). Looks like I'm in heaven, right?

I enjoyed everyone's talks and, with few exceptions, was never bored, despite the highly technical scientific data.

Amazingly, probably half the talks referenced Ingo Swann. Several mentioned the work of another one of my heroes, Dean Radin. Several mentioned The Monroe Institute and their work. Several of the talks mentioned OBEs in general. Oh, and I met several people who actually read my blog! Now my head is spinning in so many directions. I want to go out and research so many of these findings. But where can I find the time?