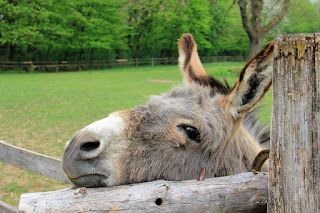 I wasn't going to post this, especially so close to my last post, but I decided to anyway, just for fun. I figured this will probably be my last blog article of 2018, so why not? It's kind of my Christmas present to my readers and I hope you enjoy it.

I'm in a local writing group called Brainerd Writers Alliance. Last Saturday, at our December meeting, one of our members gave everyone a "writing exercise." It was basically a fun, lighthearted ten (or so) minute exercise for your creative mind. The challenge was to write some creative story (fiction or nonfiction) from a short list of categories. When the time was up, everybody read their story aloud.

Most of the categories revolved around Christmas, so I decided to write a story about the first Christmas. The problem was, we could only use pen and paper. This was "lightning writing" or "speed writing." I couldn't pause to think. I just wrote words down on the paper as fast and furious as they'd come to me. In other words, this was very close to "automatic writing" where the story just kind of flowed from my head to my hand, and then to the paper. You should have seen my hand fly across the paper as I wrote.

So here's my Christmas story. Just don't expect much because ten minutes isn't much time to write anything, especially hand writing it on paper, let alone a cohesive story! I did a small amount of editing to clean it up, but it's mostly unchanged.

The caravan stopped at the stable. His journey had ended. Fod was exhausted to the point of breaking. He felt undernourished, hungry and dejected, and his feet ached. He was alone and it seemed that nobody cared about his burdens. He felt unloved, just another beast of burden, but that’s not unexpected for a Persian mule.

His masters had piled up huge boxes of supplies on all the animals’ backs, but his was the heaviest; they were filled with gold. Why couldn’t he have gotten the spices or incense which weighed so much less? But that would have shifted the weight to one of his friends—the other mules—and he didn’t want that either.

It seemed like his masters didn’t care about him. “Follow the star. Just follow the star.” That’s all they ever cared about. They were the world famous Magi, Zoroastrian priests, so why did they take us so far away from Persia?, he wondered. What good would come out of it? Dressed in their priestly robes, they looked like kings, and no one would dare question their wisdom; not even a mule.

The high priest opened the manger door and Fod noticed a small baby lying in a bed of straw. The baby didn’t cry, but was surrounded by an air of peace and calm. The humans exchanged words, but it wasn’t mule-talk, so he didn’t understand. Was this the reason for the eleven hundred mile journey? What was so special about this child? He wanted to know.

The slaves took the boxes of gold off his back and he felt so much better, so much lighter, like he could walk on air. He wanted to investigate further, but he was afraid to intrude. He needed the right opportunity.

As the slaves hauled the last of the boxes inside, they left the door ajar just a little. Then they shuffled to the far side of the building to talk without disturbing the baby. That was the moment Fod had been waiting for. He nudged the door further open with his bulbous nose and stuck his head inside, then craned his neck into the straw enclosure and sniffed the child.

The child was so quiet he thought he was asleep, but he wasn’t. The baby reached a tiny hand up and touched Fod’s nose. Suddenly, he understood. He was embraced and flooded with God’s divine love. He knew his purpose was fulfilled. He had played an important part in God’s plan and would go down in history. Suddenly, he knew the journey was worth the pain, worth the toil, worth all the back-breaking hardship and labor. Maybe he was just a simple mule, but without him, the journey would have ended in failure.

He thought about it a minute. Then he decided it was the same for everyone.

* * *
Happy Holidays to all my readers of all genders, races, colors, religions, and walks of life. Here's to overcoming what separates us.