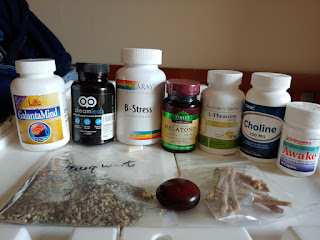 Here is part 2 of my article "Vitamins, Herbal Supplements and Probiotics for OBE". To read part 1, click on this link.


Caffeine
I sometimes drink a caffeine drink (like a can of soda) in the evening, and it doesn’t keep me from sleeping. However, I’ve noticed extra lucidity and can often remember my dreams better when I do. For what it’s worth, Keith Morgan says to avoid caffeine,5 but my experience is just the opposite.

Michael Raduga suggests you keep a cup of coffee or energy drink like Red Bull or Monster by your bedside. When you wake up in the middle of the night between sleep cycles, drink the caffeine drink and go back to sleep immediately. He claims to have a 60% success rate with this method.6

Caffeine with Melatonin for Lucidity
Melatonin is a natural brain hormone you can buy in the United States as a supplement.7 Some people take it with caffeine right before bed for OBEs. The caffeine stimulates consciousness and the melatonin promotes sleep, and thus, conscious sleep.

Consult your doctor before taking melatonin. Start out with 3mg right before bed, but beware: It may make you unusually drowsy the next morning. Never take melatonin before driving a car or operating heavy machinery, because it will make you sleepy. If 3mg doesn’t affect you, bump it to 10mg. If 10mg doesn’t affect you, try 20mg, but don’t go higher than that. If 10mg hits you too hard, you can also try a smaller dose. I haven’t experimented much with melatonin.

Caffeine plus Alcohol for Lucidity
I’ve never been much of an alcohol drinker. I drink maybe one alcoholic drink a month, if that. Some people say you can sometimes induce OBEs by drinking both a caffeine drink and an alcoholic drink right before bed. I’ve never tried it, so all I can is report what people say. Some research indicates that both alcohol and barbiturates suppress OBEs,8 but Akhena insists that a moderate amount of alcohol is not a problem.9

Galantamine and Choline for Lucidity
Galantamine is a drug used to treat Alzheimer’s disease, because it enhances memory, but some people use it to induce lucid dreams. It is an acetylcholinesterase inhibitor (AChEl), which means it blocks the breakdown of the neurotransmitter acetylcholine, a molecule that supports memory. I’ve tried taking it twice and didn’t notice any effect. Some claim galantamine produces “poor quality” lucid dreams, but it’s better than none at all. Consider it a way to “jump start” the process. You can buy it as a commercial product called “Galantamind” which combines galantamine with vitamin B-5 and choline, a nutrient from which the brain synthesizes acetylcholine. There’s also a product called “Galantamind Plus” that contains a cocktail of other vitamins (including B-6 and B-12) as well as galantamine.

It’s best to take one galantamine tablet in the middle of the night when you wake up before one of your last sleep cycles of the night. If you take it too early, you might have problems getting to sleep.

Dream Leaf
Another product you can buy for lucid dreaming is Dream Leaf. Each bottle contains several red pills and blue pills. (These are NOT the same pills as the movie The Matrix, but the manufacturer apparently wants that mystique.) The pills contain Mugwort, 5-HTP, Huperzine-A, Alpha GPC, Choline, and Bitartrate.

To use dream leaf, take one red pill before bed. Next, use the WBTB technique (chapter 57.) When your alarm goes off six hours into sleep, you take the blue pull to induce lucidity and go back to sleep. I’ve only tried Dream Leaf once, and it had no effect on me. I believe the red pills contain mugwort (among other things) and the blue pills contain galantamine (among other things).

Mexican Calea (Calea ternifolia)
Mexican calea, also known as calea ternifolia or “dream herb” is a species of flowering plant in the aster family. It’s sometimes used in Mexico to treat intestinal problems like diarrhea. People also use it to induce lucid dreams and to remember their dreams because it’s a natural oneirogen (it enhances dream-like states of consciousness). The leaves are smoked or brewed into a tea. It has a bitter taste, and can have some undesirable side-effects like nausea and vomiting. I’ve never tried it.

African Dream Root (Silene undulata)
Another oneirogen used to induce lucid dreams is African Dream Root. The Xhosa people of Southern Africa consider it a sacred plant and use it in their ceremonies. Like Mexican Calea, it’s commonly cut up and brewed into a tea. I’ve never tried this either, but I have friends who have.

African Dream Herb (Entada rheedii)
African Dream Herb is a large woody nut / seed about one inch in diameter. It’s also known as snuff box sea bean and cacoon vine (in Jamaica). It’s used in traditional African medicine to induce “vivid” dreams (although I haven’t heard of it specifically used for lucid dreaming) and to communicate with spirits. It’s common in many coastal places of the world, but not the Americas. The inner meat of the nut can be chopped up and eaten or ground into a fine powder and added to tobacco which is smoked just before sleep.

L-Theanine
L-Theanine is an amino acid found mostly in tea leaves. You can buy it as a supplement from health food stores to promote relaxation and stress relief without drowsiness. Unlike Mexican Calea, there are no known bad side-effects. Some people claim to induce OBEs by taking L-Theanine along with caffeine. I’ve tried it a couple times, but it never induced lucidity.

Cannabis / Marijuana
I’ve never used cannabis (marijuana), so again, I’m speaking out of ignorance here. Some people claim marijuana encourages OBEs. Susan Blackmore had her first (and very lengthy) OBE after smoking marijuana.12 I’m not aware of any other authors who claim to use it for OBEs. Marijuana is considered a mild hallucinogen, so it interferes with normal processing of the TPJ. But as with all hallucinogens, can you really trust what you experience?

Warning
Before you take any of these supplements, talk to your doctor about drug interactions and side-effects. Research the supplements and how they may affect you. Most of these over-the-counter supplements are not regulated by the FDA or other government organizations. In other words: PLEASE BE CAREFUL AND DON’T DO ANYTHING RISKY. OBEs are not worth risking your health.