Review: Out of the Body Experiences

Review: Out of the Body Experiences 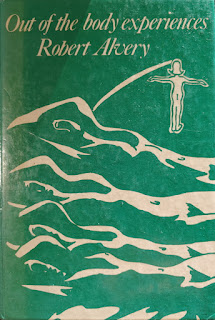 Today I'm reviewing the book Out of the Body Experiences by Robert Alvery.

This is a very obscure and hard-to-find OBE book that is copyright 1975.

The author, Robert Alvery, was a salesman in the UK who grew up in the early 1910s or so. In 1933, he became a spiritual healer, eventually joining the Spiritualist Church. He hooked up with his teacher, a spirit medium by the name of Estelle Roberts, and received much of his OBE training from her spirit guide, Red Cloud.

He had many out-of-body experiences, some of which are in the book. A few of them involved him meeting with dead loved ones, like his brother who had died several years prior. He makes some interesting observations. For example, he looked for his silver cord and never found it, even though he fully expected it to be there. Unfortunately, most of his OBEs were not very interesting, at least to me.

At the time this book was written, there weren't many books about astral projection. He didn't get around to reading Sylvan Muldoon's book until around 1965, but he was unclear which of Muldoon's three books he read. Alvery simply calls it "Astral Projection" but it could have been any of the three Muldoon books:
But before all that, Alvery became part of a Spiritualist healing circle, and decided to try some interesting experiments. Using hypnosis, he started putting his patients into a deep trance, then he would instruct them to go out-of-body and explore while the circle did their healing. Some of the patients came back with interesting stories of being out-of-body, many of which are in the book. Some of these OBEs had veridical evidence to suggest the OBEs were "real" although more modern books have better evidence (Graham Nicholls' books come to mind).

I found this quote interesting:


"These Laws [of being able to leave the body] must not be misused and it is for safety's sake most necessary that intelligences in the next world should control all out of the body experiences for us amateurs." (pg. 99)

In other words, Alvery thinks OBEs should always be controlled by spirits, not by us. Unfortunately, I didn't find much else of interest.

The book seems somewhat disorganized and rambling. It reads almost like some kind of strange manifesto. He goes from saying logical things like:


"Make no mistake about the fact that what stupid people call magic and miracles are but the operation of laws they do not yet understand." (pg. 97)

But then he randomly cites references in the Bible related to dreams, visions, and spirit visitations, which I didn't think were relevant.

The book is 118 pages long with small margins and tiny font, so there's actually a lot of content packed into a small package. The spelling and grammar are top-notch, although I did find one mistake. His British English is somewhat encumbered and hard to read, although I've seen much worse. I only had to look up two words in the dictionary. One of them was "groyne" which is apparently an alternate spelling of "groin."

There are absolutely no OBE techniques, tips or suggestions in there. It's simply a collection of OBE narratives from both him and patients of his healing circle. And not very interesting narratives at that. But it is interesting from a historical perspective, given the book's age.

If you're looking for OBE narratives, I recommend Jurgen Ziewe's book Multidimensional Man instead.