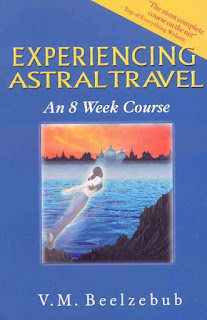 Sorry for the length of this article, but there's a lot to talk about. Like my other long reviews, (e.g. Michael Raduga's and Robert Bruce's books) it means there's a lot of good stuff.

I've owned this book a long time. I've skimmed it but I've always avoided reading it, for one simple reason: The author, Mark Pritchard, decided to call himself V.M. Beelzebub. He doesn't give any explanation for that name or where he got it, but really: What in the world was he thinking? Everyone probably remembers the name from Bohemian Rhapsody by Queen:

But I remember it mostly from The Book of Ceremonial Magic by Arthur Edward Waite which is kind of like a "demonology 101" book. According to Wikipedia, Beelzebub...


"...is a name derived from a Philistine god, formerly worshipped in Ekron, and later adopted by some Abrahamic religions as a major demon. The name Beelzebub is associated with the Canaanite god Baal. In theological sources, predominantly Christian, Beelzebub is sometimes another name for the devil, similar to Satan. He is known in demonology as one of the seven princes of Hell."

So I always wondered: Was Pritchard trying to impress us with his illustrious name? Was he trying to make us think he's in league with the devil? Or the devil himself? Let's face it: Astral Projection gets a bad rap as it is from fanatical Christians who insist it's a form of "witchcraft" which is forbidden in the Bible. AP has nothing to do with witchcraft or satanism (although those paths might practice AP). One thing's for sure: His name might just weed out people who are ignorant about such matters. But really...What's wrong with using his real name? I would have had a lot more respect for him if he had. Or maybe I should ditch Bob Peterson and assume a more dark and mysterious pen name like "T.J. Asmodeus"? What do you think? Nah.

Okay, enough levity. Now that I've actually read the whole book, I can tell you: it's actually a very good "how to" book for astral projection. So let's get into it.

The first thing I liked about Pritchard (Sorry, I just can't call him Beelzebub) is that we share a common trait:


"I wasn't born with the ability to Astral project like some people, so I had to learn how to do it and, sometimes with great struggles, to overcome many obstacles until the techniques succeeded." (pg. xi)

This is mostly an AP/OBE technique book and it contains a lot of pretty good exercises. Each week in the 8 week course introduces new exercises and suggests you keep using the previous ones, so you gradually build up your OBE repertoire. Some of the exercises include:
The best thing about this book--where the book shines--is that almost every chapter has an extensive "Questions and Answers" section. These are often longer than the main text itself, and they contain very good (unfiltered) questions and very good answers. For example, someone asked him about drugs. His response was (in part):


"All drug-induced experiences belong to the negative side and that side is only strengthened in a person by taking drugs." (pg. 14)

Someone asked if you can meet and communicate with people in an OBE. Again, in part:


"You can see people who are awake in the physical because you see their astral part but you cannot communicate with them because they will not be able to see you unless they have polyvision." (pg. 14)

My experience is that you can communicate with in-the-body people, but it's like talking to their subconscious. They act distracted and don't engage you in conversation, but they will talk nonetheless. They won't remember the conversation though.

Someone asked if reduced eating can help with OBEs. His response:


"As long as you are eating sensibly I suggest you keep your regular eating pattern and continue practicing in order to improve your concentration and OBE experiences." (pg. 15)


I tend to disagree. I think reduced eating can help you induce OBEs. At least it does for me.

Someone asked about dark shapes and shadowy movements in the room. His response:


"The negative things you perceived could have come from your subconscious although they are more likely to be negative entities in the astral to deal with them you will need to know about conjurations which we used to expel negative entities of any kind." (pg. 17)

I tend to think the opposite. In my experience, most negative encounters come from the guardian of the threshold, i.e. your own subconscious. That's not to say negative entities won't occasionally try to mess with you; it's just less common. Pritchard does give two main "conjurations" in the book to get rid of negative entities. The first one is:

I've always been a very science-oriented guy, so invoking Jupiter and/or Bellilin just seems like nonsense to me. Sorry. That's just who I am. In my opinion, it's just a psychological tool to control your own fear. And if it works, feel free to use it. But you could just as easily use a quote from your favorite holy book, like Psalm 23 of the Bible:


"Yea, though I walk through the valley of the shadow of death, I shall fear no evil, for thou art with me..."

Or even quote a favorite song, as long as it brings you a feeling of power and protection. Like this excerpt from the song "The Power of Thy Sword" by Manowar:


"I'm the master of the world, I have no fear of man or beast,

Born inside the soul of the world
Riding hard, breaking bone, with steel and stone
Eternal might I was born to wield..."

I don't like that Pritchard always seems to assume the worst, which tends to reinforce negative encounters. At one point he says:


"There is a huge war going on between the forces of light and darkness, most of this is unknown to the average person..." (pg. 102)


"...The more we progress spiritually, the more the negative entities attack us and try to stop us. They see us then as people who are getting away from their grip and who begin to pose a threat to them.

The further into the light we go the more the darkness comes against us." (pg. 102)

Mark, Mark, Mark. Negativity like that will only cause trouble. Here's a similar answer to another guy's negative encounter:


"What you perceived coming towards you was a sinister entity. There is nothing to be frightened about though, they can be there at any time, it is just that you were aware of its presence then. Later in the course you will have a technique that you can use to get rid of anything like that." (pg. 24)

He does, however, suggest that you should be fearless, which I completely agree with.


"Remember that negative forces use fear to stop any astral investigation. If you give in to them they will have won, but if you don't you will find a whole new world opening up for you." (pg. 77)


Pritchard touches on something I called "The Fantasy Trap" in my first book. In fact, I dedicated a whole chapter to it which you can read by clicking on this link. In some of my other books I similarly caution not to play "what if" with hypnagogic images for the same reason. This is rarely mentioned in OBE literature, so I applaud his response:


"Any daydreams there actually turn into dreams and before you know it, you're in a dream and you do not realize that you projected until you wake up from sleep." (pg. 35)

So by all means: avoid daydreaming in an OBE and stay focused.

Pritchard doesn't draw a clear line between astral projection and lucid dreams. When someone asked about it, he said this:


"With projection, you go straight from the body. When you wake up in a dream, you have missed the projection but you are still conscious in the Astral. You can be in the same place from both methods. It is only the way that you get there that is different." (pg. 57)

To me, the two are quite different, and I spelled out the differences in this article.

Many books say that you can create whatever you want in an OBE by using your imagination. While that may be true for lucid dreams, it doesn't seem to be the case for OBEs. Pritchard seems to agree:


"Forget about having spherical vision or trying to perceive in a certain way. That can make you create things from your own imagination that are not really there and that can make you lose the Astral [projection], turning it into a dream or bringing you back to the body. It just becomes a distraction; it is best to be simple and clear in the astral." (pg. 58)

A lot of people feel the vibrations and their physical body goes into sleep paralysis, but then they don't know what to do next. I talk about that in my sleep paralysis article and my "Almost Move Technique." Here's what Pritchard says about it:


"You need to train yourself to get up from bed when the parts of your [astral] body begin to move. Don't pretend or imagine that you are getting up; you have to actually get up from the bed." (pg. 70)

The book also includes a fairly decent list of dream symbols and how to interpret them, as well as some basics of numerology. The downside is that he credits Samael Aun Weor for most of this information. Samael Aun Weor still holds the record for the worst out-of-body book I've ever read. You can read my review of it here.

The only downside of this book is that it comes from an "occult" point of view; a world view in which spells, demons, and black magic are assumed to exist, and they're lurking around every corner to grab you. They're not.

One thing to note, though: When I was reading this book, I felt a strange kind of energy. It was almost as if an entity (or multiples)--maybe even Pritchard himself--sensed my reading the book and turned their focus toward me. I found myself doing habitual energy shielding to avoid energy drain. So either I was just a bit creeped out by all that talk of negative forces, or else I really did get the notice of non-physical force by reading it. In either case, you may want to use energy shielding while reading the book.

The upside is that the book contains lots of good solid OBE techniques and advice, and extensive questions and answers sections.

The book is 157 pages with tight margins and small font, which means there's a lot of content. I found a few typos throughout the book, but it's well written, mature, and pretty good overall. I'll give it 3.5 stars (bordering on 4) out of 5.