Explorations Out of the Body

Explorations Out of the Body 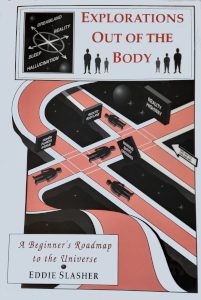 Today I'm reviewing Explorations Out of the Body: A Beginner's Roadmap to the Universe by Eddie Slasher. The book is copyright 1997.

Eddie Slasher (it seems to be his real name, not a pen name) sets up good expectations and credentials right from the start: the introduction. He comes across as an ordinary guy, a self-described "nerd in every sense of the word" who kind of fell into OBEs by chance. In sixth grade of his school, the class was given assignments to do a research project. Eddie chose the subject of lucid dreaming and started by reading Stephen LaBerge's classic book, Lucid Dreaming. Then he learned to induce lucid dreams. It wasn't long before he discovered he could dispel the illusion of the dream and find himself in an out-of-body environment. From there he started to explore. He quickly discovered "False Awakenings" which he curiously calls "Breakthrough Dreams," in which you wake up and get on with your day, only to discover you're still dreaming.

Years later, when he was 18, Slasher found the book that got me started: Journeys Out of the Body by Robert Monroe, and it reignited his interest in OBEs. So we know where he got his knowledge about OBEs: his own personal experience, which is really the best way. In fact, he brings up several good points about OBEs throughout the book and always follows them with OBE narratives from his journal to show exactly what he encountered and led to his conclusions.

One of his most important conclusions is that some things--even some people--in his OBEs were hallucinations. And if he focused on them too long, they sucked him back into an ordinary dream state. This is something I described in my first book as "The Fantasy Trap." He also discovered he could dispel these hallucinations simply by questioning their reality. For example:

"The teenager looked very familiar to me. Then it struck me that he was a character in a fictional book I was writing. I asked him if he was Lance from my book and watched as he instantly disappeared. A few other people also disappeared. They were other hallucinations." (pg. 8)

He uses this trick in many of his OBE narratives: he asks whether certain things are real or imaginary, and they disappear, leaving him with a more objective OBE environment. He describes being in a room full of people and watching half of them disappear because they were dream characters. The "real" people stuck around.

The writing is unpretentious; it's honest, upfront and not at all conceited or superior. He's not a new age yoga-instructor vegan activist. He's an ordinary guy; sometimes unemployed, sometimes doing odd jobs like car salesman. He says things like:

"Pigs have no great worries, and don't concern themselves with such abstract thoughts as what is the meaning of their lives which, by the way is for the noble cause of great bacon. Incidentally if you're an animal rights activist or vegetarian I don't care. Throw down my book if you don't want to read it. Survival of the fittest is the rule in life, and the fitter eat the less fit both literally and figuratively." (pg. 13)

He doesn't hide or down-play some "less than noble" or morally questionable OBE experiments, such as mind control, which he talks about in chapter 10 (ref: page 151).

He found an easy way to visit any person, a process he calls "Indenting" in which you recall to mind a feeling or image of the person and literally screaming his or her name several times (in the OBE). I don't know where Slasher came up with the term "indent" but I suspect it's a mis-reading of Robert Monroe's "Ident" (short for identity: a mental frequency or address of a person) from Monroe's second book, Far Journeys, which he mentions in passing. Slasher says with a little practice and effort, he learned (and you can learn) to "indent" on places as well as people. (This matches my experience on the matter, but I never scream; I just "pull" myself to the identity of where I want to go.)

Here's one of his more interesting assertions:

"Second, the Meaning of Life is that we exist in a physical universe in order to gain more control of our thought processes." (pg. 27)

Where this book shines is the numerous out-of-body experiments Slasher did. In a recent blog article, Are OBEs "Real?" - Part 6, I wrote about some of Slasher's (failed) attempts to prove whether OBEs were real by using his OBEs to predict the Georgia "Pick 3" lottery. But he did several other fascinating experiments. For example, he tried to photograph and even film an OBE while trying to make his non-physical body as dense as possible. (It didn't work; he couldn't see anything on film).

As for OBE techniques, Slasher strongly recommends you keep a dream journal. I agree wholeheartedly, and wrote about it in my blog, here. He also recommends Wake Back To Bed (WBTB) setting your alarm to wake you after 3 or 4 hours of sleep. He advocates a technique he calls "Reach Out" in which you focus on a physical object in the room that's at least 7 feet (2.13 meters) away and pretend to reach out and pull on the object with non-physical arms and hands.

Another technique is "Indenting out" which is basically the same as Micheal Raduga's "immeditate relocation" from his book The Phase.

Another technique is trying to imagine walking through the room and seeing from your non-physical body's perspective. As a visual aid, he talks about the old television show "Tales From the Crypt" in which they would slowly move and pan a first-person point of view. This really isn't too different from the Target Technique.

He also talks about hypnosis and the importance of changing your belief system, much as Rick Stack recommended in his book. Slasher writes:

"If you convince your subconscious that OOBEs are simple to induce and that you will have one, in all probability you will." (pg. 69)

By far his most used technique is upgrading from a lucid dream into an OBE, which he often does just by asserting, "Wow, I'm out of body!" and dispelling the dream hallucinations. He asserts that:

"The mere Act of questioning whether you are out-of-body or not guarantees that you are actually out-of-body." (pg. 60)

As for other tips and techniques, he mentions that a good workout before sleep increases your OBE ability. This matches my experience (as noted in chapter 19 of my first book) as well as a few other authors.

He has some interesting observations about OBEs that aren't found in other books, such as the effects of drugs on his OBE ability. For example, he claims that aspirin interferes with his ability to induce OBEs.

"Although aspirin isn't a strong drug, it took away a degree of my conscious control making it very difficult to get out of body. When I did finally manage to get out I experienced difficulty in seeing and in controlling my motions." (pg. 71)

He also claims drugs like Ritalin, Phenobarbital, and Tegretol inhibited or neutralized his OBE ability.

His take on the silver cord is pretty simple and straightforward:

"Your silver cord is not going to sever because it doesn't exist. It's only an hallucination created by your mind." (pg. 79)

Like me, he tried several times to visit friends and family in an out-of-body state, talking to their subconscious mind. He writes:

"I have yet to visit a consciously awake person who later remembered the visit." (pg. 90)

He experimented with using an OBE to do "mind control." For example, he claims to have used an OBE to influence a HR (Human Resources) person to hire him for a job. He writes at length how this is pretty easy and could be abused in the future. He even gives instructions on how to do it, much like the "Jedi Mind Trick" from the Star Wars movies.

In another fascinating experiment, writes about using his OBEs to inject himself into another person's dream, and strangely, he had no control over that persons dream objects. Unlike his own dreams, he couldn't simply dismiss the other person's hallucinations. He even felt "trapped" by the hallucination and unable to get out.

He also experimented with trying to change physical reality. He did several experiments where he would place an object, like a knife, on a piece of paper and write on the paper "Knife is on the paper" and the date. Then he'd induce an OBE and try to move the object, or knock it off the paper. In his OBE, the object would seem to move, then go zipping back to its original position on the paper. When he woke, the object was in the same place he'd left it. For a long time he was convinced the object was really moving and teleporting back to its original location, and he even tried to capture that on film (it didn't work). Then he tried to push an analog camera's exposure button from an OBE, but that also ended in failure.

He also mentions that his OBEs caused numerous electrical problems. For example, he blamed his OBEs for burning out the electronics of several televisions he bought. He had to return multiple televisions to the same store multiple times because of his OBE experiments were apparently causing their electronics to break. (A similar claim is common among psychic healers and Near-Death Experiencers).

Perhaps the most interesting experiments Slasher did was trying to locate missing children. He mentioned an OBE in which he tried to find "Jacob W. of the Jacob W. Foundation." Because I'm a Minnesota boy, I assume he refers to the famous Jacob Wetterling abduction case. Slasher's OBE took place on January 12, 1994. In his OBE, he was transported to a large field and could tell Jacob was dead, but then he had a moral dilemma: What should he do with the information? The true fate of Jacob Wetterling wasn't known until October, 2015 when authorities learned that the boy had been killed shortly after his abduction, in 1989. So Slasher's OBE observation (again, published in 1997) was, in fact, correct.

The book is 178 pages with good font and margins, so there's plenty of content to satisfy. The spelling and grammar are good. The writing is personable and non-assuming, but there were several typos that should have been caught by the editor.

I loved this book when I first read it, and I love it even more now. I give it 4 and a half stars. This book is a rare gem and well worth the money, if you can find a copy.