The Handbook of Astral Power 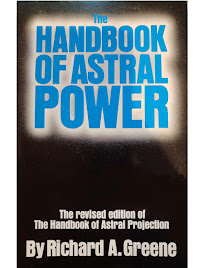 by Richard A. Greene

"This book is a handbook (one in a series) based on over 30 years of experience, research and practice that will teach you how to astral travel." (pg. 7)

Unfortunately, the book does not live up to this promise. I found it disappointing.
Like many books on astral projection, Greene gives his own interpretation of the various "planes of existence." He lists them as:

He asserts that we operate bodies simultaneously that correspond to these four planes. So even when you're firmly inside your physical body, when you experience thoughts, they come from the mental plane. When you feel emotions, they come from the astral plane, and so forth. I disagree with his assertion, but whatever.

Chapter 3 is called "Exercises to develop the imagination and concentration" and this makes up his primary out-of-body technique. Greene advises us to visualize five symbols as follows:

He calls these the occult "Tattwa" symbols, and doesn't go into any detail as to their Hindu origins, or as much detail as, say, J.H.Brennan's 1975 book Astral Doorways does.

He says to do this about a half-hour. The counting should be done "at your own speed." The most important point is that the breathing should be consistent.

Chapter 5 is "Transference of Consciousness." On the one hand, he says this helps you develop the ability to project your consciousness out of the body, but on the other hand, he says it's "A form of mental projection" (pg. 37) (as opposed to astral projection.) The technique is basically to take a cup and place it on a table on one side of the room, then sit on the opposite side of the room and with eyes closed:

"Imagine that you are taking on the shape of the cup and that you actually become the cup...Once you can create this identification with the cup, try to feel yourself in its exact location. In other words, try to see everything from the cup's point of view. For example, since the cup is on the other side of the room from where your physical body is located, you should be able to "see" or perceive your physical body from the cups position or point of view." (pg. 37-38)

That's basically it. He doesn't say how to transfer your conscious awareness outside your body, except for imagining that it happens. Now granted, for some people, it's just that easy. But not for me. Sure, I can very easily imagine my awareness on the other side of the room, in a cup or whatever, but that doesn't coax the seat of my consciousness to move.

So...If that's "mental projection"--which I think most people today would call "remote viewing"--then what about astral projection? He says:

"Astral projection (or travelling) is the ability to attune your consciousness to the Astral Plane's vibratory frequency. To accomplish this, you take your consciousness and attention out of the physical body and refocus it into the astral body." (pg. 46)

Say what? How vague is that? I mean, in a way, he's right: it is all a matter of focus. But he doesn't tell you how to accomplish it. He basically says to just do it.

Later, he talks about "Combined Astral/Mental Projection" in which you place your consciousness (mental body) into the energy image or form (astral body).

"This type of projection ties the Astral and Mental Planes together, creating a conscious (Mental Plane) awareness of being in the astral body (Astral Plane) so that you feel your astral sensations directly." (pg. 48).

But how? He doesn't say how. I'm sorry, but this is starting to sound way too vague, hokey and made-up. It gets worse. He says things like:

"I asked the student about his experience with astral projection and particularly in comparison with the mental projection; he answered that he felt that astral projection was easier to do since all that was necessary was to visualize the astral body and then project it out of the physical body." (pg. 61)

Oh, if only it was that easy! Greene makes it sound easy, like all you need to do it pretend, and it just magically happens. But I'm a professional computer analyst: I want concrete steps and detailed instructions. I cannot simply close my eyes and make it happen. I simply do not accept "Imagine you're out-of-body...okay, now that you're out of body, try this." Vague vague vague.

Unfortunately, it doesn't get any better. Chapter 12 is "Attaining Soul Consciousness" but he basically says to leave your body (temporarily ignoring the fact that he doesn't really say how to accomplish that) then visualize that your consciousness becomes a white ball of light, then rise straight into the air, then:

"At this point either think mentally, or if you want, say it verbally, that you now desire your higher divine intelligence (also known as the Holy Guardian Angel, the Higher Self, the personal daemon, etc.) to appear to you." (pg. 79)

Then you ask your Higher Self to manifest as a large yellow sphere, about the size of the sun. (He says to ask, but then he says to visualize it). Next, you "Project yourself into the yellow sphere." (pg. 80)

And why does he call your higher self the "Holy Guardian Angel?" He doesn't say much about that. Angels are a whole other topic for another day.

Chapter 14 is "About Travelling- Odds and Ends." The first sentence of the chapter is:

"The most frequently asked question about astral or mental projection is, 'How do I know that I am really projecting my consciousness?'" (pg. 87)

Wait. I'm confused. Is he asking whether the experience is "real?" That's not what his answer implies. For example, he says:

"Another way of knowing if you are travelling is by feeling certain physical sensations." (pg. 87)

That's not proof, now, is it? So maybe he's asking how you know if you've really had the experience, as opposed to just imagining it? Well, believe me: that's not even a valid question. If you've been out-of-body, there will be no doubt in your mind. If you're just experiencing flights of fancy or creative visualization or imagination, then it wasn't an OBE at all. I've said it many times: if this is a real OBE, you won't need to ask this question. Even if your awareness is cloudy, murky or groggy, it will be just like firsthand conscious experience. (You might question whether it was an out-of-body experience or a lucid dream, but neither are flights of fancy.)

A bit further on, Greene writes:

Okay, again, this is a vague and misleading statement. If you're rooted squarely in your physical body and think of a friend, it's true that a small portion of your being, like a tiny thread, actually travels to, or connects with, that friend. But that's not the same as astral projection. That's not astral travel. That's just misleading, and another topic for a different day.

He does offer some good advice about OBEs. For example, if you cannot push yourself through a wall or a window, turn around to face away from it, then step backward and back your way through it. This is a simple psychological trick that works very effectively. Still, Greene comes up with an absurd explanation:

"By turning around, the magnetic force field of the astral body was changed enough to be able not to get repelled. This allowed the body of light to enter where it at first had been repelled." (pg. 108)

Nonsense: magnetism is a feature of physical nature, not non-physical. Magnetic fields do not seem to affect the astral body.

The other problem I have with the book is that several times it mentions a follow-on book, and where to write to purchase it, and other books he has written. At the end of the book, there are even eight pages devoted to listing all his books, what they're about, and their prices. Sell, sell, sell. No thanks.

In short: This book is not all bad, but it is very vague and misleading. It's 177 pages long, but the font is big, paragraph spacing is big, and there's a lot of wasted white space. The whole thing could be reformatted into 100 pages, given a good font, margins and spacing.

I'm only giving this 2 stars out of 5, and that's being generous. There are much better books out there, with better instructions, more reasonable explanations and less nonsense.