Review: Man Outside Himself

Review: Man Outside Himself 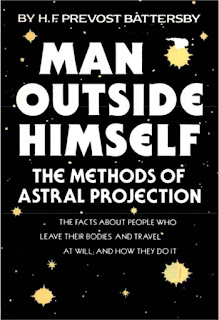 Today I'm reviewing the book Man Outside Himself: The Methods of Astral Projection by H.F. Prevost Battersby. The copyright is from 1969. The book has a second subtitle: The Facts About People Who Leave Their Bodies and Travel At Will; And How They Do It. The book is very hard to find in print, but can be easily downloaded (I think for free).

Since I started investigating astral projection/out-of-body experiences in 1979, this was one of the first ten books I bought, but it didn't have much advice for learning to induce OBEs. There are several casual mentions like, "When asked how he did it, John said he didn't know." Not real helpful. There were a few scant mentions of techniques, but it's all pretty basic stuff: calm and focus your mind and relax your body, and so on. The best set of instructions was this:

"The essential points for study are: The power to concentrate one's thoughts on a single object without being distracted by outside stimuli; the practice of rhythmic breathing; nervous and muscular relaxation; and, finally, the ability to suspend thought completely." (pg. 89)

I agree with all that, but it's still very basic.

The book does have a lot of OBE narratives and if you follow my blog, you know how much I love narratives.

Battersby also has a lot of really cool out-of-body history in the book. He talks about the earliest reports of astral projection/OBEs in modern times, and some of the most verifiable. The study of astral projection in modern times began when Ralph Shirley wrote articles for a periodical called The Occult Review in 1907. In 1920 Shirley published a narrative from one of the earliest pioneers of the subject, Oliver Fox. Eventually in 1938 Shirley published a book titled The Mystery of the Human Double. Battersby talks about Fox, Sylvan Muldoon, Yram, Charles Lancelin, and many of the other early astral projectors. He also talks about the Theosophists like H.P.Blavatsky and A.E.Powell, and about mystics like Emanuel Swedenborg.

Many of the OBE narratives quoted in the book are excerpts from another famous book, Phantasms of the Living, written by three founding members of the Society for Psychical Research (SPR): Edmund Gurney, Frederic Myers and Frank Podmore. In many cases the apparition of a living person was seen by someone else. Not all of them were out-of-body experiences: some were cases of autoscopy (dopelganger), and Battersby addresses that subject in the book as well.

Here's one of my favorites: In 1891, a woman named Mrs. Butler was living in Ireland with her husband, but for years she kept "dreaming" she was in a beautiful house. It was quite literally her "dream house." Later, when the couple moved to London, they found the actual house. She said, "Why, this is the house of my dreams!" and they bought it. When the housekeeper saw Mrs. Butler the first time, she exclaimed, "Why, you're the ghost!" She then explained that the house had the reputation of being haunted and she had apparently seen the non-physical body of Mrs. Butler many times. (pg. 49) I absolutely love stories like this, and this book contains many like it.

In another case, a woman named Hermione P. Okeden claimed she could leave her body, so her friends challenged her to visit in the out-of-body state and describe the details of their homes. The friends tried several times to fool her, even rearranging furniture in the houses, changing clothes, and tried to confuse her in other ways, but her descriptions were always accurate. (pg. 64)

Battersby also talks about an often overlooked astral traveler, Vincent Turvey, whose out-of-body adventures were documented in the book, The Beginnings of Seership. (I loved that book, but haven't book reviewed it yet.) What makes Turvey unique is that he would travel out-of-body to visit spiritualist seances across town and use the spirit medium's body to do automatic writing, signing his own name. On at least one occasion he even claimed to take control of the medium's body, talk through his or her vocal cords, and so on. Turvey's book contains reluctantly signed testimonials of several eyewitnesses who were at the seance and saw it happen. Note that Turvey had medical conditions that made it virtually impossible for him to cheat or even attend the seances in-the-body.

I loved this book. On the plus side, most of Battersby's OBE narratives had third-party verification. It's pretty convincing stuff. On the minus side, the narratives are all pretty old, from the 1800s and early 1900s, which is often enough to make hardened skeptics like Susan Blackmore discount them completely. There aren't any solid astral projection techniques.

Battersby has done a ton of research here. The writing is professional and the book is 100 pages, with tight margins and a very small font, so there's a good amount of content. But the information is very old, and you won't find any OBE techniques in there. I'm giving the book 3 and a 1/2 stars out of 5.