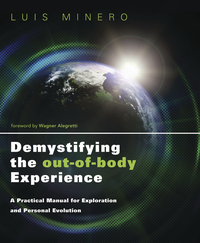 I recently finished reading the book Demystifying the Out-of-body Experience by Luis Minero. Luis Minero is an instructor for the IAC, the International Academy of Consciousness. This is a 501(c)3 non-profit organization started by followers of Waldo Vieira. They have several spiritual centers across the world, and they teach out-of-body experience techniques.


As I've done for several other books, I'm posting my thoughts and feelings about the book so that others may benefit. My goal is not to praise nor tear down a competitor's book, but to give a fair assessment and assist others who might consider buying the book for their own research. I've done this with several other books, and readers of my blog know that I'm honest with my feelings. I don't pull punches. This is a somewhat long book, so I'm writing a long book review.

This was a very good book with very good information. Like all books, it had advantages and disadvantages, plus things I liked and things I didn't. Like Vieira's book, I tried really hard to find problems with this one, but in the end, I liked the book a lot (as I did Vieira's). First, what I didn't like:

First, in my opinion, it spent too much time on peripheral topics: More than half the book is about energy development, spiritual development, reincarnation, the study of consciousness (something they call "Conscientiology") and other side-topics, plus bibliography, glossary, and index. I would much rather have had more material directly relating to the OBEs themselves and what to expect. I wanted more "meat" to the book, and less side dishes.

Second, it read too much like a textbook. Especially the first half of the book made extensive use of "passive voice." I know this was intentional (it intentionally makes a book sound more like a textbook), but as a grammar Nazi, it drove me nuts. Will he please just use a pronoun? I like to hear personal experiences and personal perspectives, not matter-of-fact statements of how things work. (There are some OBE narratives, but I wanted more). But the further I got into the book, the better it got. It got more personal and less text-book, and that was good.

Third, I found his discussion of the Mental Body (or "mentalsoma," as he calls it) and the Mental Plane inadequate. He admits that experiences of the "mental plane" defy words; it's indescribable. Still, I wanted more information. As an out-of-body traveler, I've never experienced a projection out of my astral body into other mysterious dimensions or planes that are somehow "higher" than the astral. I wanted to learn what evidence there was for the existence of a mental body; people's descriptions of it. Minero says it "allows for the most lucid manifestation" but what does that mean? If it's such a hyper-lucid experience, why does it defy description? He says "Therefore, if, when we are projected with the mentalsoma, we are able to achieve 100% lucidity, then the recollection "should" be easier. In practice, however, the case is the opposite. Usually mentalsomatic projections are harder to recall than psychosoma [astral body] projections." He goes on to give explanations, but it still seemed lacking to me. I wanted a lot more information, more details, more firsthand accounts, otherwise it's not much better than Theosophists like Powell and Leadbeater who gave similar descriptions of multiple non-physical bodies beyond the astral with no substance to back them up; the reader is forced to take their word for it.

Fourth, it introduced too much arcane terminology. Readers learn about "velo," "thosenes," "holothosenes," "morphothosenes," "mentalsomas," "energosomas," "cosmoethics," "holomaturity," "penta" and on and on. The long list of new terminology seemed unnecessary, long and off-putting. Having said that, the use of new terminology is explained in the beginning, and it really does make some sense: The study of OBEs has been too long strangled by the stigmas of past terminology. For too long, we've been writing and talking in 19th century concepts: many terms (for example, "thought forms") are leftovers from Theosophy, Spiritualism and other traditions. Terms like "astral projection" and "astral body" are filled with questionable assumptions carried over from Occult traditions. Even common words like "death" are too emotionally charged to be put to good use, regardless of the context. So I do see the need for new OBE terminology. Still, it was off-putting.

The excessive terminology reminded me of my early years when I was checking out Eckankar (which is another topic), which seemed too much like a cult. Back then, when researching the difference between a religion and a cult, I remembered reading that a cult will try to suck you into their world by introducing their own terminology: it makes you feel special--like you're in on some secret--while alienating you from the rest of the world (because they don't get it). No, I don't view the IAC, Vieira, or Minero part of a cult; I'm just hyper-sensitive to the issue. (For one thing, cults typically teach that their path is the only way to God or that their leader is the sole representative of God on Earth. Eckankar taught that, but the IAC encourages people to do their own research and follow their own path: refreshing, in a world of preachers.) The book's use of strange terminology is effective, even if it is a bit too much for some people; now when I walk into a building, I find myself questioning the place's holothosenes!

Now for what I liked:

First, despite the early use of passive voice, Minero's book was very well written. His English was impeccable. The grammar was perfect. The information was useful and the book was very well organized. Everything was clear and concise, and followed logically from the last. The book was very well planned and executed. And he accomplished his goal: he demystified the OBE quite well. It could just have easily been a textbook about how your body's respiratory system works. (Read one of those medical books and I guarantee you'll get plenty of new terminology thrown at you!)

Second, unlike many OBE authors, Minero did not make unsubstantiated claims. He backed up everything he said with multiple references, and in some cases, personal experiences. At the end of every chapter, there was an extensive list of references. He's done his homework, and done it quite well. He's gone the extra mile, and is openly sharing the information. This is much more satisfying than many other OBE books, which make claims and you're left to judge their experiences and descriptions without any evidence or collaboration (you have to take their word for it).

Third, I really liked the fact that he acknowledged that our knowledge about OBEs is not static, but rather, dynamic and ever-changing. He acknowledged the need for further exploration, and stated that experience is the best teacher. He never claimed that our knowledge is complete or fixed; we will likely need to adjust our views as we gain more experience, just as science is supposed to adjust their theories to fit observations. This is another shining example of why the IAC should not be considered a cult.

Fourth, I liked the energy exercises and explanations. The "Velo" exercise is especially useful for people who are unfamiliar with energy work. The OBE exercises are straightforward too, although I wanted more substance here.

This book has a lot of information, and it's good information. If an OBE novice picked it up and started reading it, they might very well question many of the things that are written. Age-old concepts and assumptions are written as matter-of-fact as a textbook on physics. With new terminology thrown left and right, the innocent reader might ask him/herself, "Where in the heck did this assumption come from? Which hat is he pulling this rabbit from?" But having experienced OBEs myself for many years, I cannot argue with anything Minero has written (except where I have no experience like the mental body stuff). His experience perfectly matches mine, and given the same background, I could just have easily written the same things. The shining example of this is his description of nonphysical entities: astral guides and helpers (spirit guides, angels or whatever you want to call them). His description of what they're like, how they operate and how we interact with them perfectly matches my experience. Very well done.

All in all, I'd say this was a very good book.