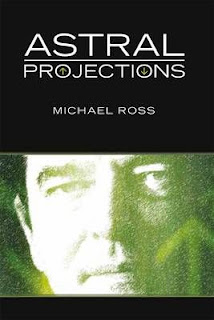 Time for another book review. This time it's Astral Projections by Michael Ross. This one weighs in at 179 pages, and although the book is not as wide nor as tall as the previous two books I reviewed, at least it's a little thicker and uses a small font and no wasted space, so it felt bigger.

The book isn't so much an analysis of astral projection as it is a personal journey, and that made it quite endearing. The author is a retired Scottish schoolteacher, and his education shows: his writing is clear, highly intelligent, and even eloquent. As such, it resonated with me (I'm an excellent proof-reader and have often been accused of being a grammar Nazi). For example, I loved his description of the astral world as having a "delicious feeling and sensation of 'eeriness'." Even his occasional British and/or Scottish colloquialisms and conventions were endearing. For example, he references a "torch" instead of the American "Flashlight" I'm accustomed to.

Ross seems a lot like me, in many ways. Like me, he started his out-of-body journeys in the 1970s. Like me, he read the great OBE authors like Muldoon and Monroe. Like me, he checked out the religion of Spiritualism but never got in too deep. Like me, he investigated Eckankar and decided they were a cult. Like me, he investigated the Jane Roberts "Seth" material and found a lot of value in that. Like me, Ross wrote about an OBE encounter in which he met with a family member who had died. It was his son Murray, who had committed suicide, which sounds quite heart-wrenching. (In my case, it was my father).


Like me, he studied the great philosophers like David Hume and Charles Braud and many others. Although he expounded on their views of the OBE and how they came to their conclusions, he didn't really talk about how his own experiences supported or contradicted them, and that would have made the book better.

This OBE book isn't perfect. None are. I found his OBE narratives a bit disorganized and they didn't seem to serve any point in his story. Part of the problem is that he kept a journal of all his dreams, lucid dreams and OBEs, and wrote them all down in the same place. Some of this is reproduced in the book, but it was hard to tell what was what. I wanted more narratives, but unique stories that made a point.
The first half of the book was, in my opinion, much better than the second. The first half had the freshness of discovery. The second half had a certain amount of redundancy; it reiterated several points and narratives from the first half. He even revisited the philosopher CD Braud a second time (even the first iteration was a bit much.)
One of the things I liked about this book is Michael Ross's brutal honesty and self-criticism. He's not trying to make himself out to be a guru or an expert at OBE. He admits his flaws and shortcomings. He admits his laziness. The OBEs in the book had a huge impact on him and his life, but as an experiencer myself, I had hoped for something more groundbreaking.

This book is one man's journey of OBE discovery. It's not Earth-shaking or profound, but it is endearing and entertaining. I'm giving it a thumbs up.