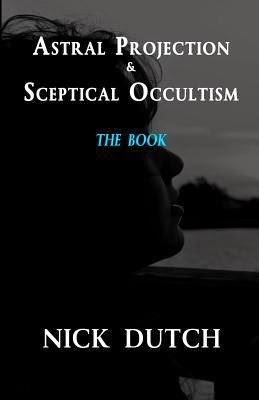 I never get tired of reading out-of-body experience books, and that's because everyone has a different perspective. This book is really different from other books on the subject, and for that reason I found it enjoyable.

When I first picked up the book, I was concerned. The back cover has a photo of the author sporting a baseball cap and looking positively angry. That's not a good first impression. Second, the cover was almost completely black: the face in the photo above is not visible unless you look really hard on my copy. On the other hand, it's 162 pages, and it's in a decent font, so there's actually a good amount of content there.

The title was intriguing. The term "Sceptical Occultism" (British spelling; for me it's Skeptical) seemed like an oxymoron: a self-contradiction. I haven't known any occultists who were skeptical (enough), and I haven't known any skeptics who were also occultists. So how can the two concepts be reconciled? It has elements of both. Sometimes the author sounds very grounded and skeptical, and yet his OBEs are just as "out there" as most books in the genre. I'm skeptical too, yet I can't deny my own experiences. That's how it works.

When I first started reading, I gained a certain amount of respect for the author for his honesty. He openly admits that we will never be able to prove things like a nonphysical world, the existence of a soul (or astral body), life after death, or anything else for that matter. We can never disprove the arguments of an atheist. All we can really say for sure is that people have the experience. Despite all the faith (or doubt) in the world, people do have OBEs, but Dutch insists that's all we can say: We can't necessarily imply the existence of a soul, the afterlife, nonphysical reality, or any of it based on the experience. But the experiences do happen. The author drives this point a bit too far, talking about it for at least the first 50 pages of the book. That's a long time to make that argument.


"But we must always remember that "Proof" and "Evidence" are just stages in an academic debate." (pg. 47)

That's not to say the experience is without value. He argues that OBEs are still well worth having.


"...there are atheists who believe that if you criticise the intellectual fallacies of a superstitious person that is sufficient to honestly make a hard truth claim that the phenomena of which they speak or believe in, can't have any reality at all rather than just being a misinterpretation of something that could be real. To destroy an argument is not to destroy the natural phenomena in question! If you destroy an argument about what is real in the world, you have destroyed the argument, but you cannot destroy nature." (pg. 50)

In other words, even if a skeptic shoots down somebody's implications based on their OBEs, they haven't disproved anything: The person still had the experience. Even if it wasn't "real" it was still an experience, and it still has value for that reason.


"In order to try and get these strange experiences it is quite common for the newcomer to the occult to get themselves too hard and fast involved with occultists, people who say they know, but in reality, these people who say that they know just have beliefs and a complete lack of ability to deploy scientific thinking to any strange phenomena that they might experience. Many of them are would be cult leaders and use the alleged authority of their alleged religion or beliefs to control the seeker of the truth." (pg 57).

The discussion was honest and fascinating, but it got old after a while. At first I thought the whole book might be a dry philosophical discussion, but it wasn't. The book gets much better after that. He does talk about OBEs, admitting that his major influence was the book The Projection of the Astral Body by Muldoon and Carrington (I have a book review of that one too). He talks about firsthand observations from his own OBEs, and that's where I perked up. For example:


"It is rare to see spirits in the astral world, but sometimes they do appear, and they can be summoned by calling them in the spirit world." (Pg. 66)

I don't agree. In my experience, seeing spirits is really quite common. However, there's a difference between ordinary spirits (which I often see) and guides or helpers (which I often can't see). They're not rare for me, anyway! Oddly, that's about the only place where I disagree.

Next, Dutch dives into the deep end of the pool and starts talking about how to induce OBEs. He has an excellent discussion about conditioning. He talks in detail about good relaxation methods. He points out things that are overlooked by many, like the importance of doing OBE walk-throughs:


"Rehearsal is also important. Work it out. How you are going to do the projection. Get familiar with the whole process. "Walk" yourself through it in visualisation or even physically around the flat, apartment or house where you live. Tell yourself, "As I fall asleep, I am going to start from my bed, rise parallel to my sleeping physical shell and then slide through the air from Here and then slowly descend and right myself so that I am standing up Here." (pg. 74).

I'm not talking about an OBE technique here (although it can work); I'm talking about using your imagination to impress the idea of OBEs on your subconscious mind (which is talked about by Muldoon and many other experts).

On page 89, Dutch slipped once again into his discourse about how you have to see this as just an experience, and that you can't imply anything from it about religion, etc. However, I cheered for him equally when he talked about how doing so can lead us into meaningless conjecture:


"...people go off on to the useless tangent of arguing about religion and different beliefs. Arguments that are by their very nature, arguments in a circle as no matter what, people from all sides of the debate won't be willing to concede that they might be wrong. All scientific reasoning goes out of the window and we end up with warring sectarian tribes attacking each other over cyberspace and no real scientific progression at all. Try and focus your attention on the experience and how to generate it." (pg. 90)

The "Astral Projection" Facebook group has been mired by too much of this type of useless bickering about religion, and no good ever came of it. He revisits this idea at the end of the book, stressing that focus should be placed on studying the experience itself, both scientifically and from a firsthand point of view.

I found Dutch's approach to OBEs to be fresh. For example, unlike many of the OBE books out there, he recommends using mantras to produce OBEs. He goes into fairly good detail about it. He doesn't try to make it some deep secret "occult" mystery. He explains why mantras work: they get you into the right frame of mind. He explains what to use: something simple that will give you an uplifting positive feeling. One example he uses is the mantra "HE - LI - UM". In other words, helium, the gas used to fill balloons to make them float. This is not rocket science. Helium is simple, can give you an uplifting feeling, has connotations of being lighter than air, able to float, etc. Sheer genius!

I really liked the book for its honesty. Nick Dutch is not trying to make himself out to be some kind of guru, occultist or something special. He admits that it took him a full two years of trying before he had his first OBE. He was persistent and tried everything before he found combinations that worked. And he's eager to share what he learned, without an air of superiority.

He talks about how belief is not necessary: All you need is "suspension of disbelief." Even if you don't believe in God or the supernatural, you can at least suspend your disbelief long enough to do OBE attempts, and that may indeed help you reproduce the experience. It's really kind of an enigma:


"Yes, I do believe that religious people may get more spiritual sensations and experiences, but they ascribe the experience to God, whereas I ascribe it to nature.

Incidentally, I have tried in the past, to use the concept of God to help me in reaching the state of mind for an astral projection. I chose the mantra "I am ascending slowly to reach God" and found it really rather powerful. Whether God exists is an irrelevance, the words had a degree of power to help me generate the experience." (pg 112-113).

On page 117, Dutch starts giving some of his OBE history and OBE narrations. This makes it all the more genuine. These aren't mind-blowing OBEs, but they definitely have a quality of authenticity. For example, he describes the OBEs as having "bluish yellow creamy light" and he writes about how objects in the room don't cast a shadow, and are illuminated from their own light. His descriptions are rich and often quite entertaining. Sometimes he went too far and scared himself. In one experiment, he tried to experiment with OBE-lycanthropy: trying to turn himself into a werewolf. It wasn't mind-blowing but it was interesting.

In college he was fond of going to the library to do his OBE work. He wrote:

The converse is also true. Despite the word "Scepticism" in the title, he doesn't try to refute any claims, or present any scientific evidence. What he does do is tell you what he experienced and what worked for him.

It was not comprehensive. When it comes to inducing OBEs, there's a lot he did not cover, but what he did cover, he covered well: his discussions were not light-weight by any means.

As a grammar Nazi, it made me cringe. There were probably a hundred or more typos and grammatical problems. Like so many self-published books, this one definitely needed both a proof-reader and an editor. And no, it's not just because I'm American and he's English. These are things like "then" versus "than" (as the quote above proves), or "an" where he meant "and" or "mediation" where he meant "meditation."

Despite the grammar issues, it's a decent book. I found this book to be very informative, honest and helpful for learning the art of inducing OBEs.