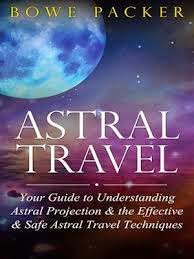 First of all, this book is short. It's only 89 pages long, and it's got lots of white space. That's mainly because every paragraph is separated by two or more blanks lines, which is very unusual in the industry. So there's not much content.

It didn't take me long to find some points that I found questionable. For example:


"There has never been a discovery of 'hell' while traveling through astral planes. It seems that, so far as astral travelers are concerned, it simply doesn't exist. Though astral travelers for centuries have tried to find this land they have been unable to do so. Even traveling through the different realms it seems to have been impossible." (page 13).

Well, okay. Maybe. Although reports of "hell" are rare, I don't think it's entirely true. Granted, this book has a 2013 copyright, but Mary Deioma's 2014 book, Loved, talks about her finding what she thinks is "hell". Prior to that, some near-death experiencers (NDErs) have interpreted some of their locations as 'hell'. I tend to believe that our modern ideas of "Hell" come from various people's OBEs and NDEs. For example, part of Dante's Divine Comedy, "The Inferno." I personally have never seen "hell" nor have I looked for it. I've read some accounts of OBEs in which the environment was "hellish" but that's not quite the same as "hell". Many OBE authors insist that there are many "consensus hells" (and consensus heavens) and people who think they deserve punishment find themselves in these places after death: the direct result of their own beliefs. Still, he's right that the vast majority of OBE narratives have been positive, even heavenly.

A little later I found another example. After discussing dream interpretation, he writes:


"Now remember the fact that astral projection isn't a dream. That means that what's happening when you project yourself is completely real. You can't interpret the things that happen in your real life because they don't have an alternate meaning. They weren't put there by anything but chance and they have no extra meaning." (pp. 29-30)

Taken at face value, I disagree. I tend to think all our experiences (both in-the-body and out-of-body) are meaningful. I try to find meaning in every event in my life. I think everything we do can be given a spiritual or non-spiritual interpretation.

Then it occurred to me: There's another explanation: maybe the author is just not explaining this well enough. In dreams (both normal and lucid), events "play out" like a movie in front of us. We experience a self-created hallucination full of symbols and events that are symbolic of our fears, hopes, and concerns. In waking life (and OBEs), events don't "play out." We are not hallucinating; we're having objective experiences. So maybe Bowe Packer meant the same thing, but just didn't explain it well.

When I got to chapter 10, How to Project Yourself, I was very disappointed. The chapter is only five paragraphs long, and it really says nothing meaningful. In the first paragraph, he says that there are plenty of methods of astral projection that have been used throughout history,


"So look around and see what you can find out from others."

He goes on to say:


"These are the different ways that projection occurs"

He explains them as: (1) voluntary without control, (2) voluntary with control, (3) involuntary where you see yourself from the outside, and (4) involuntary  where you have conscious control. And that's basically it. End of chapter. There are absolutely no instructions--none, zero, nada, zilch--on how to induce an OBE in a chapter called "How to Project Yourself!" Maybe he just didn't name the chapter well?

Here's another prime example of the author not explaining himself well:


"Also, your physical body cannot be killed off while you are inhabiting your astral body." (page 40).

Does he mean to say that your physical body is immortal and immune from harm during an OBE; that it can't be killed? That's what he said, but he can't mean that, right? I think what he's probably trying to say is that your physical body will not be harmed as a result of the OBE. Again, a truth that seems hidden inside a poor explanation.

In Chapter 12, he talks about  psychic protection and "The Blessed Circle." He explains (in a strange tabular format) how to perform a ritual of protection. If you're Christian, that consists of drawing a circle of salt that's exactly 5.4 feet in diameter, and saying prayers in each of the four cardinal directions (plus up). Then he explains a similar ritual if you're Pagan rather than Christian. I'm sorry, but to me, this is all unnecessary. At first I wanted to say nonsense, but that's too strong of a word. In my opinion, the ritual serves only one purpose: To invoke your trust that you are protected, and that trust is what actually protects you. I believe in using psychic protection, but I don't do any rituals: it's more about controlling your fears, believing in yourself and your protection and having the confidence to handle potential threats. Since he gave both Christian and Pagan examples, he's probably trying to get to the same place, but he didn't explain that.

There were many places in this book that I flagged with post-it notes that said "What?" or "Huh?" or even "WTF?" For example, he states:


"...You'll want to have a soft mattress without metal springs. The metal has been known to interfere with your astral projection..." (pg. 54).

The reason I flagged this is because I don't recall ever reading that in any other book. Where did he come up with that? I've had hundreds of OBEs on a mattress with metal springs and it was never a problem. I remember a couple times where I sunk slowly down into my mattress and felt the metal springs piercing through my astral body. I felt like I was impaled all over my astral body by giant cork screws, but without any pain. It was very strange. It was weird. It was fun! But it was NOT a problem, and it definitely did not interfere. (I've also had OBEs in a water bed and a sleep number bed, but that's another story).

Here's another one I flagged:


"Make sure that you are taking care to get rid of these desires in one way or another. If you give in to sexual desire you will want to wait two hours before you attempt astral projection."  (pg. 56)

While it's true that you should eliminate hunger and other bodily demands before attempting OBE, I disagree with the two-hour thing. Speaking strictly as a man here: the time immediately after sexual release is ideal for inducing OBE, not two hours later, because it adds an extra level of relaxation.

Here's another oddity I flagged:


"Once you've created the circle make sure you place the foam mattress in the center of it so that you can lay your head down toward the east." (pg. 57).

Really? The East? That's the first OBE book I can recall that recommends East. In his breakthrough book Journeys Out of the Body, Robert Monroe recommended pointing your head toward the North. As I stated in my first book, I've always had the most success pointing toward the West. I suspect it's a psychological thing. And how exactly do you fit both a mattress and a body inside a circle that's only 5.4 feet in diameter? I'm 5 feet 10!

One more example and I'll shut up:


"Time of Day-The time of day that you try to project can have a lot to do with your level of success as well. It's difficult at certain times because of the moon or the sun but if you can find a good time of day it will begin to get easier for you quickly." (pg. 81)

First of all, that paragraph didn't say much, except to find a time that works best for you. What times are better? He doesn't say. (My opinion is that mid-morning is best because you're well rested and not drowsy, but still focused and close to the sleep state.) It blames the moon or the sun, but other than that, it doesn't give any justification. Why is the sun or moon a problem? He should have said something. Anything. (My opinion is that the sun triggers the body to release lots of the brain chemical DHEA, causing your body to be too awake.)

When I got to chapter 13, "Tips For Your Projection", guess what I found? Bowe Packer's OBE techniques! Shouldn't they be in chapter 10, How to Project Yourself? These were not tips, they were actual OBE techniques.

So the bottom line is that the author is not very good at explaining himself.

As a grammar Nazi, I'd have to say this book needs serious editing. The spelling and grammar were not bad, but the sentence structures and wordiness make it hard to read.

On the positive side, he gives four OBE techniques, although I could argue that the last one ("Sending an Observer") is really a remote viewing technique, not an OBE technique. The four are not very original or unique, but they are given in decent detail. On the negative side, there weren't any OBE narratives, so you can't get an idea of Bowe Packer's experiences. You can't tell his credentials or where he got his knowledge.

This book isn't high on my list. To make it a great book, it should have been five times as long, without the white-space, more succinct in style, with more clarity, and edited professionally.