Review: Out Of Body Experiences by Kensho

Review: Out Of Body Experiences 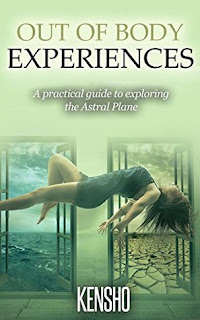 Today I'm reviewing the book Out Of Body Experiences by Kensho. The subtitle is "A practical guide to exploring the Astral Plane."

The book is a short 80 pages, with average margins, average font, average grammar, and 12 small chapters. The cover art is good, but I also found another book on amazon that has an almost identical cover.

I've got to be brutally honest. The book turned me off right away. The prologue, introduction and the first chapter were okay, I guess, but chapter 2, "The Different Dimensions" didn't sit well with me. He started talking new-age pseudo-science that made no sense to me. He talked about different planes of existence as if they were different dimensions. First, he talked about the physical world as the "Third Dimension" because of its length, height and width. But I know I'm not alone in believing that the passage of "time" is a fourth dimension, and yes, it does exist right here in our physical world. It seemed like a glaring oversight to me. Next, regarding the physical world, he wrote:


"There are 48 different divine laws that control every physical object in this dimension. This includes laws of physics like gravity, and dimensional laws like distance." (pg. 14)

The next world, he said, is "The Vital World" (which most books commonly call the Etheric plane or the Real-Time Zone), and it supposedly has 36 divine laws. After that is the Astral World and Mental World (combined) and there are 24 laws. Where did I hear these kind of claims before? Oh yeah. It was the late Samael Aun Weor's book, Dream Yoga, which I reviewed almost a year ago. It was the undoubtedly the worse OBE book I'd ever read. I quickly thumbed to the back of this book and read the "About The Author" section. Sure enough, I found:


"Kensho's knowledge comes from the teachings of his guru Zen Buddhist Master Dharmapa Rimpoche, and Gnostic Master Samael Aun Weor, as well as his life experiences and anecdotes." (pg. 80)

So he just admitted his "knowledge" is mostly secondhand, rather than being based on firsthand experience. Hm...

Who is this Kensho, anyway, I wondered. From his photo he looked like a normal white dude, not a Japanese teacher. The copyright in the front of the book was listed as "Kensho" but I found another copyright in the back that said Cyrus Kirkpatrick. It said Kensho got his name from the Order of the Yellow Dragon, an organization I know nothing about.

I've always had a deep seated distrust of OBE teachers who change their name to something esoteric. I feel like either they aren't happy being themselves, or else they're trying to impress me. I've always had this problem, and I need to apologize for it. I had the same problem with Ophiel (aka Edward Peach) in 1980. I had the same problem with Beelzebub (aka Mark Pritchard) ten years ago, and I had this problem with Akhena last year (but she definitely earned her credentials and my respect). Yeah, I know. I shouldn't be so cynical about teachers who change their name. I should just humbly recognize that sometimes people want to reinvent themselves, and changing their name is part of that. Maybe someday, once I learn to destroy the last vestiges of my ego, I'll even move to an ashram myself and change my name too. But I digress.

A lot of people know I'm skeptical about metaphysical claims; even my own. It's just that I've had too many OBEs and seen too many weird and unbelievable things in my life; I can't deny what I've witnessed firsthand. Still, I question everything and try to maintain a healthy skepticism. And that's a good thing. Especially when reading an OBE book, because there's too much crap on the market.

So back to the book. If you're going to make a claim about the physical plane having 48 laws, I want to see them. Spell them out. Let the reader evaluate them. How did you come to know about these laws of physics? Was it from your OBEs? I've got a book on physics that's 3 inches thick, so bring it. How many of the 48 are laws of thermodynamics? Of quantum mechanics? Show me where Planck's constant fits in. Unfortunately, the author doesn't. He seems to make these claims for two reasons: One, to make a point that the higher the plane, the fewer laws, and therefore the happier you are. And two, to make himself sound like a voice of authority who knows how it all works. To me it just seemed like hand waving.

Although very short, chapter 4, "The Difference Between Dreams, Lucid Dreaming and Astral Projection" was a bit more to my liking. I've always insisted they were two different things. (It's a very deep subject, but basically I believe lucid dreams are OBEs in which you experience a hallucinated dream world.) This chapter also talks about brain waves, and he agrees with me that Delta brain waves are not good for OBEs:


"The Delta brain waves stage is when we lose complete awareness, it is when we simple "black out" and this lasts some 30 minutes. The Delta ruins everything for us when we want to be conscious to have an OBE..." (pg. 25)


Chapter 5 is titled "Preparation for Astral Travel" and has some decent advice, such as avoiding television before attempting OBE, lying face up, having the right frame of mind, and so forth. However, he recommends practicing between 9:30pm (21:30) and 10:00pm (22:00) which I disagree with. In my experience, it's always best to practice first thing in the morning when you're alert and your mind is less cluttered.

Chapter 6 is "O.B.E. Techniques" and it's actually pretty decent. Like Weor, he likes to use obscure mantras. This chapter is a mixture of different OBE techniques, most of which are better described in other OBE books. For example, he reduces Robert Bruce's famous "Rope Technique" to one tiny (poorly worded) paragraph:


"Imagine there's a rope hanging on top of you, either visible or invisible. Imagine you grab it with your astral hands and start pulling your astral body up until you leave your physical body." (pg. 41)

That's it. Needless to say, that's sorely lacking in detail. His other techniques are not quite that bad though.

Chapter 7 is "More OBE Techniques". I'm not sure why he felt the need to break his OBE techniques into two chapters, but he did. This chapter contains more mantras and miscellaneous other techniques. It's not bad information.

Chapter 8 is "The Magical Technique of the Angel's Trumpet" which he claims is "real elemental magic." It also uses a mantra (Angel's Trumpet is supposedly a type of tree.) I don't believe in "real magic." I believe in laws of physics that we just don't understand yet.

Some of what he recommends is to pray to the divine mother or divine father, which is probably just a link to the subconscious (and not bad advice).

The rest of the book is not bad. It contains practical advice for lucid dreaming, dealing with astral situations, meeting astral people, and how to tell "real" people from hallucinated dream people and so forth. It's pretty basic stuff.

There's really only one OBE narrative and it describes how the author once met a co-worker in the astral plane before they met in real life. I would have liked to read more of his experiences, but unfortunately, there were none. The book is more like "This is how things work" (implied: based on what my guru told me) rather than my preference: "This is what I experienced and therefore know firsthand."

Okay, so maybe my early impressions of the book tainted my opinion. Maybe I just didn't like how the author made secondhand claims that obviously came from his guru rather than his experience. Maybe I just didn't like the way the author gave himself the voice of authority with no evidence or OBEs to back up his assertions. I guess the book's content was not that bad. It was just...average. But I've read a lot of OBE books that are a lot better.