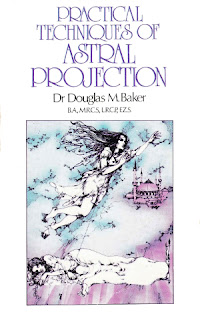 This is one of the very first books I ever bought about astral projection. It has a copyright date of 1977; a couple years before my first out-of-body experience.

The author, Dr. Douglas M. Baker, was a medical doctor who was born in London, but grew up in South Africa where he came into close contact with a large Hindu population, and the native Zulu people. Reading the book, it's obvious that he was also influenced by some older occult traditions: Theosophy and who knows what else. The book is "Gratefully Dedicated to the Master R.B." No, not Robert Bruce. I'm pretty sure he was talking about the great American playwright Robert Browning, who is quoted in the book.

The book was written in another time, when OBEs were not well known, and only a dozen or so other books existed on the subject (Bord, Battersby, Brennan, Crookall, Fox, Muldoon, Ophiel, Shirley, Turvey, and a few others.) Now there are hundreds of books out there and many years of experimentation and experience to draw from. When this book was written, no one knew much about it, and that makes it interesting.

The book is only 96 pages long, but with small font and tight margins, there's an acceptable amount of content, although some of those pages are illustrations (most of which look like the book's cover). Due to the book's age, and the formal English prose, the text is a bit difficult to read, although not that obscure. This is a more formal English; quite a contrast to the vernacular slang of the previous book, Dreamism.

Early on, Baker makes it clear that he writes from personal experience:


"It is difficult to find language sufficiently adequate to describe what happens. I have had many thousands of astral projections and know the procedures well enough, but, nevertheless, must often falter in my explanations for lack of suitable nomenclature." (pg. 14)

Nonetheless, he doesn't narrate any of his own OBEs in the book. He mostly uses other people's OBEs as examples.

Chapter 1 is Leslie Sharpe's Experience, which serves as an introduction to the subject of astral projection.

Chapter 2 is Sensations and Symptoms. He makes some curious observations about the "silver cord":


"I can only speak from experience. In all my many projections, I have never seen a cord, either linked to me or to another person. This does not mean that the cord does not exist. It may be that with my nasty scientific mind, I don't or won't accept that a piece of material like the so-called astral cord can be extended indefinitely, perhaps as much as two hundred thousand miles, say, to the moon." (pg. 19)

He admits there can be a "feeling of linkage" and a source of tugging sensations, but not an actual cord. He goes on to say that the cord is often described "near the umbilicus" by men, but well-known psychic Eileen Garrett described it as "just above the breasts." Nowadays, many people claim people astral project from one of their chakras, thus the heart/solar plexus chakra versus the sacral chakra (or "dan tien" in Chinese/Taoist traditions) (just below the belly button) or the ever popular third-eye chakra.

Chapter 4 is Separation and the Desire Factor. Here Baker writes about how important desire is to achieving OBEs.

He also writes about two different kinds of astral projection:


"There are basically two types of astral projection. There is the projection which occurs whilst the subject is fully conscious and alert in his waking consciousness and there are the projections which happen whilst the physical body is asleep or unconscious. The types dealt with in this work fall into the second category." (pg. 35)

Or, as I like to think of it, "focus level experiences" (think Monroe Institute initiates like Rosalind McKnight, Bruce Moen, Tom Campbell. Also psychics Ingo Swann, Stuart "Blue" Harary, etc.) versus traditional "out of body experiences." So his book only applies to the latter. He breaks it down even further, saying there are five stages of astral projection:
Chapter 5, Distant Targets, talks about the last two stages. He writes about an experiment in which Eileen Garrett, whose body was in New York, astrally visited a man in Newfoundland. She correctly reported many facts that she couldn't have known otherwise, like the bandages on the man's head from a recent injury.

Chapter 6, Sleeping Wakefulness, is where Baker gives his first OBE technique. This is interesting because I don't remember anyone else talking about it quite this way. You make your body fatigued (like after a long day of driving), but your mind still alert. Then you lie flat on your back, close your eyes and relax yourself as quickly as you can:


"This must be done rapidly; as rapidly as your might have done at the end of that long drive in your automobile! It is just as if your body is a sack of corn that is suddenly thrown on the floor.
The next thing to do is to hold an attitude of rejection in your mind. You must reject, for the time being, the whole world and all its claptrap." (pg. 56)

Chapter 7 is another OBE technique called Visualizing the Target. This is basically the same as William Buhlman's "Target Technique" but Baker wrote about it almost 20 years before Buhlman. You pick a target object , memorize it, then use it as the subject of intense visualization.

Chapter 8 is Five Prerequisites for Success. The five are:
I agree that these are all very important things to bear in mind. You need a strong will and desire to get out. You need good skills at imagination (preferably visualization). The notes about "sleeping lightly" are interesting. He claims if you're a deep/sound sleeper, it will be hard to achieve OBEs:


"Sleeping lightly brings an awareness of spiritual planes. It is a prerequisite of controlled, efficient astral travel." (pg. 69)

The fourth prerequisite, "Development of a Critical Faculty" is basically a well-known lucid dreaming technique. You constantly question everything. You look for anomalies and discrepancies in life. You look for keys that might trigger lucidity when you're dreaming, then you turn the lucid dream (although he doesn't call it that) into an OBE, as famously described by author Oliver Fox in his book Astral Projection.

Oddly, Baker does not mention lucid dreaming at all, or anything remotely like it. Also, he always calls it astral projection, never an OBE. (I think my hero, Charles Tart, might have coined that phrase).

The fifth prerequisite, "Breathing" goes back to Pranayama techniques of the Yogis. He describes a technique called "Bellows Breath" which was supposedly a secret occult technique kept hidden for many years. This may be one of the earliest books to describe it in detail (although my brother Joe, who runs the website esotericarchives.com, might know of earlier descriptions).

Chapter 9, Adventures on the Astral Plane, is kind of a grab-bag of things.

On page 82, Baker writes about "The Dweller on the Threshold". Not many authors tackle this subject, but it's an important one. Basically, I've always believed the "dweller" is a variety of "fear tactics" your subconscious uses to make sure you don't achieve OBEs until you're ready to handle it. It will throw scary stuff your way, and you have to face it down and keep your emotions / fear in check. Baker writes:


"No man may take the third Initiation without confronting his Dweller, facing up to its challenge and destroying it. He destroys it when he knows it for what it is, an illusion constructed out of his own fears." (pg. 82-84).

Yep.
Chapter 10 is Astral Influence on World Affairs. He talks about trying to influence members of the British government with regard to entering into an agreement (a precursor to a European Union, which Baker was against).

On the other hand, not much has been written about sexual encounters in OBEs. Robert Monroe wrote about some sexual encounters in his OBEs, but it wasn't much like LD sex. Experts tend to agree that sexual encounters in an OBE are more like a melting or melding of souls, or a chemical reaction between the astral bodies, or even explosions of intense energy (that's been my experience). In other words, not anything like physical or lucid dream sex. Mind-blowing, perhaps, but not much like the real thing.

On page 90, Baker makes some curious observations about "The Sexual Factor in Projection". I said earlier about how Baker never mentioned lucid dreaming. This is born out in his writings. He claims that any kind of sexual desire will send you careening back to your body.


"All men know that the male dream of life is often filled with sexual themes. They also discover, very quickly, that the culmination of a sexual theme in its logical conclusion, orgasm and ejaculation, cannot be accomplished WITHOUT WAKING. The sharpness of sensory feeling on the astral plane of the dream world is nowhere near to the refined and exquisite capacity to feel on the physical plane. A man has to come through to physical wakefulness to complete his sexual experience."
"This consideration is important because experimentists in astral projection report that if temptation is not resisted there is a hasty return to the physical body." (pg. 90)


"Both Sylvan Muldoon and Oliver Fox describe how yielding to the irresistible temptation (irresistible, at least to their astral forms) to attract the attention of a charming lady, had sent them hurtling back to their physical moorings." (pg. 92)

Though somewhat short, the book does make some interesting observations. It's interesting to read it in the light of how little was known about OBEs at the time it was written.

The writing is professional; maybe a little too formal, which makes it a bit stiff and sterile. It was professionally written, organized and edited. I didn't find a single problem with the grammar or spelling.

I'll give it 3 stars: It was good; it just wasn't great. I didn't find anything I greatly disagreed with. The information was solid, but now out of date. The book was a bit short and could have gone into more subjects and had a lot more detail. It would have been nice to get some narratives from the author's many OBEs. But considering I only paid $4.95 for it in 1980, it wasn't bad.