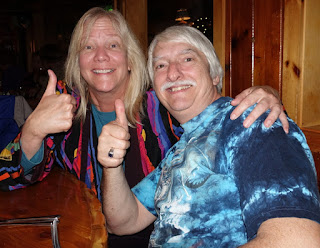 Sometimes we all get discouraged and need a little kick in the rear to get our "spiritual" asses in gear, if you know what I mean. And the Universe is happy to oblige.

A few weeks ago, I was feeling down in the dumps and disheartened. I felt like nobody cared. Well, maybe one or two people. Somebody asked me when I was going to write a second book. Seriously? A second book? I've written four. The problem is: nobody knows about them. I've sold so few copies of the last three that I felt like writing a fifth book would be a complete waste of time; nobody's going to read it anyway. Most of it was my own damn fault, too: I was lousy at self-promotion. It's part of that desire for "ego-death," right? (Oh, the irony, since the desire itself is ego-based).

Inwardly, I bargained with "God," the "Universe," my "Higher Self," my "Spirit Guides" or whatever divine force might hear:


"I feel so unmotivated. Give me some kind of sign. Let me know the work I'm doing is valuable; that I'm helping at least one person. Give me a direction."


I began to worry about whether it was the start of a mid-life crisis. Then something magical happened. I got an email from Alexander De Foe, a professor in Australia who wrote the excellent (free) book Conscious Beyond the Body, to which I had contributed a chapter. He asked me if I wanted to be part of an online education program. He wanted me to design and teach an OBE class.

I agonized over my decision. I'm not a good speaker and my voice burns out quickly. I'm not a dynamic personality. And Lord knows I'm not handsome, nor do I have a silky voice like William Buhlman, Jurgen Ziewe, Neale Donald Walsh, or most other "new age" teachers. There's still this "I'm not "worthy," "qualified," or "good enough" crap going around. Still, I've taught OBE classes before (rarely), and I already knew the material. Something inside said it was the right thing to do, so I reluctantly said yes, even though it seemed like a lot of work, and equally a waste of time.

Then about a week ago, something else magical happened. I got a message from Oshara, an old friend I knew back in 1986 when I lived in Phoenix. Back then, she was one of my favorite friends from the two "Jane Roberts / Seth" discussion groups I attended (her name was different back then). I remembered she was tall, blonde, cute, and smiley, with bright mischievous eyes (and nice hips!). She also had a witty sense of humor and no "tact filters" (like the characters on Big Bang Theory). Back then I had even asked her friends if she was available, but they gently let me down and told me Oshara was "not my type." We did, however, become good friends. Then I got a job offer I couldn't refuse and quickly moved back to Minnesota (I don't do "starving" well).

Oshara's message said she happened to be in Minnesota and if I was still there, maybe we could get together and talk about cosmic things and old times. It sounded fun, so I invited her to stay with Kathy and I for a while. I told her upfront that, since I work from home, I was unavailable during business hours, and she respected that. So she came to visit last Sunday, 11 June.

I asked her what she'd been doing since 1986. It turns out she left Phoenix about the same time I did, and like me, had traveled all over the world. She lived in California for a while, and started several magazines and meetup groups. She did odd jobs for money: radio and voice work, acted as an "extra" in many Hollywood movies, and anything related to metaphysics. She even developed her own advanced "Ouija" board to help develop channeling. She even lived in Europe for a while. Eventually she found herself back in the United States, living in Elmira, New York.

If you're a true Seth fanatic, you probably already know that Jane Roberts and her husband, Rob Butts, lived in Elmira when most of the Seth books were channeled, starting with their very first experiments with the Ouija board. Now, through a strange series of "coincidences" Oshara found herself living in the same house that the Seth material was channeled!

As a life-long fan of Seth, she was thrilled about all this, but sadly, she was alone and like me, it seemed like nobody cared. Jane Roberts had died in 1984. Rob Butts had died in 2008, and they didn't have kids, so there was nobody to carry on her legacy. The house had been sold, split into apartments, and fallen somewhat into disrepair. Thousands of pages of unpublished Seth manuscripts were still sitting in boxes in the house of Rob Butts' second wife, Laurel Butts.

I asked Oshara what brought her to Minnesota, of all places. She said she got a call from a friend who lived in Minnesota who had gotten really good results with the new Ouija board, and she wanted to continue that work. But oddly enough, when she got there, her friend mysteriously changed her mind. It seemed Oshara had driven a thousand miles for nothing. Then she remembered me.

When I asked about her future plans, she said she didn't know. She had made some friends in one of the Seth groups in Minneapolis, and thought she might like to move to Minnesota. She even talked about finding a life partner or soulmate here. She seemed kind of lost and didn't know where to go, or what to do.

Now, deep in the woods in Northern Minnesota, it seemed like nearly thirty years had been erased, and we were as comfortable as lifelong friends could ever be. Night after night, we had really good, really deep conversation. We talked about Seth, channeling, OBEs, paranormal investigations, neuroscience, chem trails, the Federal Reserve Bank, Aliens, and conspiracy theories. We shared stories of our lives, our adventures, and our travels. We laughed and joked until almost midnight every night. Poor Kathy could hardly get a word in edgewise. I sure wish I had recorded our conversations because they were magical.

The three of us even (haltingly) did the Ouija board, and meditated together. She and I spent a whole night just listening to each other's favorite music while Kathy had another obligation. Oshara introduced me to Kate Bush, This Mortal Coil, Cocteau Twins, and others. I introduced her to Arven, Dream Theater, Timo Tolkki, and others. The television sat unfulfilled in silence the whole week, forgotten and ignored; a sad monument to mind-numbing entertainment and commercialism. Oshara encouraged me, and I encouraged her. It was comfortable and it was magical.

She cheered me up, raised my vibrations, and encouraged me to follow my bliss and keep writing the many unpublished books I had started. More importantly, to keep working on the classes I'd started for Alexander De Foe. I cheered her up and encouraged her spiritual work too.

She was my message from the Universe, and I was hers. We picked up each other's pieces and charged each other's spiritual batteries. We laughed that we should start our own Internet radio show and even came up with a few catchy names for it.

Then, as if by magic, Oshara's life turned around too. She got a call from her best friend in Elmira: Laurel Butts had contacted her. The word on the street was that she might be interested in renting an apartment in the old Seth house too, and maybe even share some of the unpublished Seth manuscripts. She wanted to meet Oshara and attend the local Seth group. Her fire was lit. Suddenly she was being pulled back home as quickly as she had come. She left yesterday.

Whether you call it God, the Universe, your Higher Self, or Spirit guides, I believe there are spiritual forces that conspire for your highest spiritual good.
Something drew Oshara to Minnesota--under false pretenses--so we could cheer each other up and encourage each other's life work. And who knows? Maybe we will start that Internet radio station someday.

Remember to always cherish your friends, because they are also the hands of God. But that's a different topic for a different blog post.