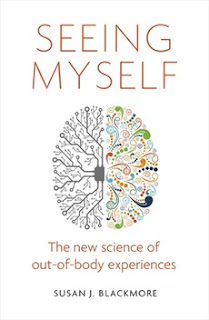 I've studied the brain and neuroscience as a hobby for many years now, and I have a lot to share. As you may have heard, I've been working on my fifth book, which is almost complete. I don't have a final title, but the subtitle right now is "The Science of OBE Induction." In other words, I use insights gained from science--what we know from neuroscience and the brain--to induce OBEs.

So when Susan Blackmore came out with Seeing Myself with its intriguing subtitle, The new science of out-of-body experiences, I knew I had to buy it and read it before I could finish my book in good conscience. I had to know: What wondrous new scientific insights does she disclose that I hadn't already talked about in my book? Unfortunately, not much. That's both a relief and a disappointment. Relief because I didn't need to revise my book "much" out of ignorance. Disappointment, because I so hoped it would bring me new insight.

Don't get me wrong: Seeing Myself is chock full of excellent scientific information regarding OBEs. It's just that I already knew most of the material.

I've followed the work of Susan Blackmore for many years, and I've read several of her books. I loved her 1982 classic Beyond the Body: An investigation of out-of-the-body experiences (which I've not yet reviewed). I like her approach and I like the way she thinks: like a scientist.

As the story goes, one night in 1970, when she was still in college, Blackmore was with a group of friends. Stressed out and sleep deprived, she decided to smoke some marijuana / cannabis / weed, and she had a very long-lasting and incredibly convincing out-of-body experience. Like many people, it changed her life. Seeing was believing. She embarked on a journey to find out exactly what OBEs are. She decided to become a parapsychologist and dedicated the rest of her life to studying the subject of consciousness. Not just scientifically; she also began meditating and has done that for more than 40 years. She earned her PhD and became a professor. Now she's a distinguished and influential psychologist, parapsychologist, visiting professor at the University of Plymouth, freelance writer, lecturer, and academic. She has rock solid credentials.

Over the years, she's done a lot of research, performed many experiments, written many scientific papers, and...get this: become a hardened skeptic. For decades, she set up randomly chosen targets in her kitchen and tried to get OBErs to identify them. Everyone who tried has failed. (I never tried because I never knew about them.) Finally she quit and gave up, convinced it's all just hallucinations.

She's squared off in radio interviews against professional OBE teachers like Graham Nicholls. But her skeptical beliefs are not unsubstantiated: she's done her homework, and done the research and hard work. Unlike many OBE books, she makes no wild or unsubstantiated claims. She backs up literally everything she says with solid scientific references and research. And she's fair. She gives serious attention to many of the ideas she's skeptical about. She doesn't poo-poo it or pay it lip service. In fact, I'd go so far as to say she knows more about OBEs than almost anyone on the planet, present company included. That's why I love her work and keep buying her books; even the non-OBE related ones.

Besides, skepticism is good. It's healthy. It keeps us from being too gullible and falling for crap that doesn't make sense.

The problem I have is: In my opinion, the book doesn't present (and refute) enough of these claims. She could have given a hundred or more pages of claims, but doesn't. For example, on the "evidence for" side:
She doesn't really even present much of the "evidence against" that supports her position, such as:
I would have thought these last two would especially have fueled her skeptical fire. So if her goal was to refute these claims, I think it fell short.

There's one more thing that bothered me. My previous article was about the recent joint conference of SSE (Society for Scientific Exploration) and IRVA International Remote Viewing Association where numerous presentations were given by serious scientists who are studying things like non-localized consciousness. While it's not directly related to OBEs, Blackmore is a parapsychologist examining the evidence of the non-physical, but she doesn't talk about that evidence at all. For example, she doesn't really say anything about the many Remote Viewing experiments. She doesn't talk about the experiments, meta-analysis and theories of Dean Radin, such as his classic book Entangled Minds. Oh, boy! Now that would be an outstanding new Blackmore book! To me, Radin's evidence for remote perception and remote influence are a lot more convincing than Blackmore's reductionism.

A lot of the book was dedicated to brain science with regard to OBEs. One by one, she goes through the features of typical OBEs and NDEs (Seeing tunnels and bright lights that don't hurt your eyes, life reviews, seeing the room from a different perspective, seeing your own body, silver cords, etc.) and explains how these things can be explained away by what scientists know about the brain. For example, she talks about the way the brain and eyes handle visual data in the V1 area of the visual cortex, and how science can explain the claims of seeing a bright light that doesn't hurt the eyes. She talks about hormones, brain chemicals, and how you can explain the accompanying feelings of euphoria and wonder. She talks about hellish NDEs and how you can explain that too with neuroscience. She talks about experiences of astral bodies, body images, body schema, and how our brains construct a working model of our experience, all with good scientific evidence.

When it comes right down to it: Science can explain just about any OBE feature using what we know about the brain. For example, she points out that science has never found any hard evidence of an "astral body" but it has found ample evidence for a detailed "body schema" inside the brain.

Blackmore's done the research. She's spent her whole life on it, and not short-changed it. So the theme in this book seems to be "I really wanted to believe, but I see no evidence to back up any claims of the non-physical." While at the same time, she argues that all these things can be explained away, given enough science.

I have two counterpoints to that:

First, you can't just discount and dismiss everything without an exhaustive examination of all the evidence. I firmly believe in the principle of the "White Crow": All it takes is one white crow to prove they exist, but no amount of evidence can prove they do not. Maybe she has examined all these cases I just mentioned, but just failed to address them? Even just a mention might have satisfied me.

If you can scientifically demonstrate non-localized transfer of information, such as the countless experiments done on remote viewing, telepathy, clairvoyance, remote healing, etc., then you can't dismiss the existence of a principle that extends beyond the physical body.

Second, I believe (as many scientists do) in Occam's Razor: If there are multiple explanations for something, the simplest is usually the correct one. In the case of OBEs, Blackmore's explanations rely on, in my opinion, a very complicated interaction between dozens of functions of neuroscience and brain function: the culmination of lots of different brain anomalies. To me it seems like a scientific house of cards. And yes, maybe the pieces can be made to fit together in some kind of intricate puzzle, but it's not the simplest explanation. The simple explanation is that "it is what it appears to be," namely, an experience of another level of reality, non-physical existence, or non-local consciousness.

I think one of her goals was to explain away her own dramatic first OBE--the one that resulted from smoking marijuana--in terms of science. But marijuana is a mild hallucinogen (as per Tart's classic book Altered States of Consciousness), so how can you trust your perceptions and experience under the influence? If you see a giant white rabbit while high on a hallucinogen, should you give it any more credence than any other hallucination? If it had happened to me, I'd write it off: regardless of how realistic it may have seemed, the simplest explanation is that it was just a hallucination caused by the drug.

But the glory of OBEs is that they usually happen to normal healthy people of every age, race, color, creed, and gender, as even Blackmore admits in the book (as per Gabbard and Twemlow's classic book With the Eyes of the Mind). Most OBEs do not occur under the influence of a drug. Even if you have an OBE after taking a hallucinogen, it doesn't mean OBEs are hallucinations.

She even spends some time arguing whether or not there may multiple types of OBEs, some of which may be hallucinations and others of which may be "real." In my opinion, she doesn't give serious enough attention to this argument. Especially since I've personally experienced more than one type!

The book is a bit of a downer because Blackmore seems to be saying "I've given up searching for evidence." She tries to put a positive spin on it. There's some amount of relief and acceptance in giving up. It's like the stages of grief. But it's still a downer.

Don't get me wrong. I love Blackmore's work, and I love all her books, including this one. It's very grounding for someone who doesn't know much about brain science. If you're a serious scientific researcher and want to know more about OBEs, this is an excellent place to start.

While this book tries to be the definitive answer on whether OBEs are "real" I think it falls short. In the end, no amount of contrary evidence will convince a true believer to switch sides. Likewise, no amount of veridical evidence from OBEs will convince a hardened skeptic. One thing's for sure: There's not enough evidence for either side to reach a definitive answer. More evidence is needed. Still, the science is great. It's a great summary of what science knows about OBEs.

The writing and editing are professional. I didn't find a single mistake in the book. The scientific references were over-the-top good. I'll give the book 4 stars.