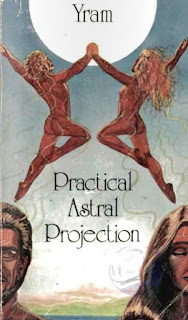 Every so often, I go back and revisit one of the old classics of the out-of-body experience genre. This time I'm reviewing Practical Astral Projection by Yram. Yram was a pseudonym for a Frenchman named Marcel Louis Forhan.

The French were really the first non-occultist pioneers of the modern era, starting with Charles Lancelin's book Méthode Dédoublement Personnel (published in the late 1800s or early 1900s; the earliest I found was from 1910), and then Forhan's/Yram's book. And Forhan was way ahead of his time.
I first read Practical Astral Projection in the early 1980s; so long ago that I didn't remember anything about it. I used to think of the book as an "occult" book, but that's completely wrong. The author even says so:


"In the present work we are not concerned with occultism nor with mysterious or sectarian operations of magic." (pg. 25)


One of the biggest downfalls of this book is that the book was written in French and translated into formal British English. And while the English is flawless, it's difficult to read.

Unfortunately, Yram doesn't really give any OBE techniques. He does give some tips and advice, such as:


"Excess of any kind must be avoided. Eat in wise moderation, avoiding highly alcoholic drinks. (This includes strong spirits like whisky, brandy, gin, etc., but allows a moderation of wine and beer, though the latter is not so good." (pg. 27)


To induce OBEs, Yram simply stresses the need for absorption, the stopping of your thoughts and blanking of your mind (something I call quiescing the mind) and to focus your mind inward (which is a bit different than concentration). He writes:


"The power to concentrate one's thoughts on a single object without being distracted by outside stimuli; the practice of rhythmic breathing; nervous and muscular relaxation; and finally, the ability to suspend thought completely." (pg. 29)

Above all, he stresses (and even harps on it for countless pages) the need to "raise your vibrations" by being spiritually loving, upright, moral, etc., and to avoid all negativity and bad thoughts, especially egotism. This, he says, is necessary in order to induce OBEs in the first place:


"Egotism will hold [the potential explorer] back to lower planes. it hinders the radiation of energy towards the matter side." (pg. 178)

And it's also true during the OBE itself:


"All ideas relating to money or fortune must disappear. All thoughts of vanity and egotism must be avoided. All pictures which have any idea of evil, or hatred, all malevolent thoughts must be forgotten." (pg. 92)

As an example, he did an experiment in which he wanted to study the effects of prayer during an OBE. So he recited the "Lord's Prayer" taught by Jesus, which he refers to as the "Paternoster" (very old word; I had to look it up). He writes:


"When I thought of the words 'Deliver us from evil' I felt such a loss of strength, was so overcome, that I was forced immediately to return to earth. This expression [Deliver us from evil] held a negative idea. What I should have said was 'Strengthen us in good,' so that vibrations of a similar nature to my words might have been created." (pg. 93)

Yram also talks about how, with OBEs, you have direct access to spiritual knowledge, so there is no more need for organized religions, which he humorously calls "religious trade unions":


"Since access to the higher worlds is the effect of our own decentralization, and it is enough to learn to love a higher and more perfect order of things, the dogmas enunciated by religious trade unions break down lamentably." (pg. 163)

He talks a lot about the phenomena and what he's observed in his out-of-body travels. Usually it's not complete OBE narratives, but in the form of brief examples like this:


"We must be ready for the strangest surprises. During one experiment, when I had used more effort than usual to project myself, I was hardly out of my body when I received a terrific slap in the face without being able to find whence it came." (pg. 52)

Like others, he talks about the invisible helpers, whom he calls "Friends," saying that they sometimes do appear, but disguise themselves:


"In passing, note the white dog as a symbol of the means used by the Friends who help us during our psychic experiments. Actually, unless one has a special connection with them, the guides rarely show themselves." (pg. 61)

He makes some interesting out-of-body observations, such as:


"Sexual differences are no more. Men or women, young or old, are no more than centres of life radiating different qualities of energy which they have assimilated during their successive incarnations." (pg. 198)

He tries to explain some of his observations in terms of science, but the science of the 1800s was primitive compared to today. He tries to explain things in terms of electricity, nuclear reactions and such. It's way outdated, but interesting from a historical perspective. Remarkably, some of his writings foreshadow the existence of what today's scientists now call "Dark Matter." He does OBE experiments with it, pushing his arms through it and such. Absolutely fascinating stuff!


"The virgin matter into which I projected myself exhibited no ties like those mentioned above. Neither thought, desire, will, nor any attraction of our own world has power over this matter, and equally, the matter has no magnetic effect on us....Seen in bulk, this matter has the colour of freshly cut ebonite. It gives out no vibration. It has no elasticity." (pg. 182)


"The existence of a substance so material led me to suppose that it might well be the root of matter." (pg. 183)

He talks about the numerous OBE experiments he did, such as repeatedly trying to move a piece of paper in the physical world:


"...I blew on that decidedly recalcitrant piece of paper...Then to finish up, I re-entered my body. The piece of paper had not moved at all." (pg. 71)

He also gives his theory of "twin flames." He met a young woman, whom he eventually married. He did OBE experiments, meeting "astrally" with his then-fiancee. He traveled to her residence ("several hundreds of miles away") without knowing the town or the house in which she lived, and then got physical confirmation:


"My fiancee was able to confirm, by letter, the exactness of the details about which I wrote." (pg. 205)

Yram also gives us a theory he calls "Unity-Multiplicity" with regard to his twin flame. After they were married, he gives probably the earliest written account of "astral sex," and gives it in great detail! It's consistent with many other accounts that came later (no pun intended!). Like others, he describes it not so much in physical terms, but of a melding or combining of souls:


"It was as if an ocean of love was taking possession of the bed. When the individuality of my wife united with mine, she brought a shade which was hardly perceptible, which then melted into my love, giving it a considerable expansion. The aura, the atmosphere thus generated became myself. By the exercise of the powers attached to this spiritual state, all our faculties are melted into a unity of conscious life. The radiation of consciousness, thus universalized, awakened in every atom of my being a kind of quivering which augmented the delicacy and sweetness of the spiritual harmony in which I found myself immersed." (pg 208)

I was surprised to read that, like a handful of others, he also describes having met Jesus on more than one occasion. I had forgotten all about that.


"On three different occasions have I been able to contact Him in a stratum where His manifestation was possible. It is quite beyond my powers to describe the many thousands of attractions which emanate from such a presence." (pg. 212)

Having seen a whole new level of reality, in the true spirit of Frenchmen of today (think "yellow vest movement"), Yram was also kind of a pioneer of "conspiracy theory" and warns us to beware of abuses of society and our governments:


"Realize the abominable way in which you are being exploited materially, morally, and intellectually. Decide, once and for all, to conquer the routine existence and preconceptions of our social state. Believe me, you will never regret having made the effort." (pg. 192-193).

That's quite a statement for 1910 France, don't you think?
Probably my favorite quote of the whole book comes near the end:


"...I insist on the need of personal work if we wish to arrive at any results of permanent worth. Start by realizing that magical powers have no existence. No one can give you a lasting power unless you have developed it for yourself." (pg. 225)

The book is 253 pages, with small margins and small font, so despite its smallish footprint, there's a lot of content.

I'm giving this book 3 and a half stars out of 5. On the good side, there were no grammar or spelling mistakes whatsoever. On the bad side, the text is a bit cumbersome and difficult to read. There's lots of good information and a few tips, but hardly any actual complete OBE techniques.