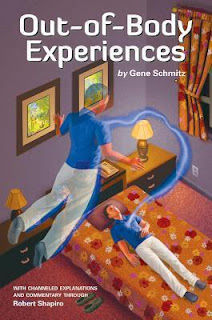 I admit it: The cover of this book gave me a bad first impression and I don't really know why. Maybe it reminded me too much of a "YA" (Young Adult fiction) book cover. So I immediately thought it would be yet another shallow 49-page "manual" written by a 23-year-old with no personal experiences who self-publishes dozens of similar "fluff" books. I was dead wrong on all accounts. It was nothing of the kind. It was actually pretty good.

This book is Schmitz's life story, and it kept me interested the whole way through. The author, Gene Schmitz, is a 70-year-old man from Oklahoma with very humble roots. He grew up on a farm and raised horses. He sold cars and trucks most of his life. And he's had lots of out-of-body experiences. He calls his OBEs "Soul Travels" although he doesn't say where he got that term. He never mentions Eckankar or Albert Taylor, so who knows.

Although he doesn't share many actual OBE narratives, he does talk about his various OBEs and he speaks from experience, which I really respect. He says some interesting things about his OBEs. For example:


"Another reason that I hated these experiences was that it was always painful when my soul reentered my body. I didn't want to go through that ordeal again, either. Many times when I woke up the next morning, my body would feel like someone had beaten me up badly." (pg. 8)

My OBEs are never painful. Well, there have been a few rare exceptions, but almost none of them are painful, even when I'm forcefully slammed back into my body, it is never painful. When I return to my body, it sometimes feels a bit stiff and...I don't know...atrophied?...but definitely not painful.


"I have never had a clue as to why soul travel takes so much energy from my physical body, which always remains in bed in a sleep-like state. Talking with other experienced soul travelers and also reading everything that I could find on the subject, I still have no explanation." (pg. 46)

Well, that's odd. I always come back feeling refreshed, excited, and energized. I've never once felt drained by my OBEs, and I've never felt I needed an abundance of energy to have them. Although some people might say I often have a lot of excess nervous energy. I've heard a few other people report that their OBEs require a lot of energy and they feel drained afterward, but it's very uncommon in the literature.

Schmitz's OBEs were always spontaneous, and the book contains no OBE induction techniques whatsoever. When he was young, they scared him a lot, and he was afraid to leave his bedroom and explore or do anything. So he just sat (or, rather, floated) there and waited patiently for them to end.


"While in a floating state, I would not be able to move any part of my body. I couldn't talk or do anything that would entice my soul to come down from the ceiling and get back into my body. It seems to want to stay floating around the room, scared almost to death" (pg. 9)

For the first several years, he has lots and lots of OBEs, but they were all pretty mundane. No aliens. No entities. Just floating around his bedroom:


"However, once I'd grown a bit used to the strangeness of the mere fact that I was floating outside of my own body, nothing earthshattering [sic] or even particularly memorable happened during any of these hundreds of soul travels. Essentially, the same experiences that I've already described were repeated over and over again." (pg. 15)

Like many other authors, he notes that his OBEs were all while lying on his back (which is how most people have success):

For what it's worth, I've had OBEs in every body position: front, back and both sides, but it's easiest on my back.

At some point Schmitz became curious about his OBEs and read Robert Monroe's first book, Journeys Out of the Body. Then he branched out into other non-OBE books in the new-age section. He got involved in a couple local metaphysical groups. Then he started to have more interesting OBEs, and they all had the air of authenticity. You can just tell from his narratives that it's the voice of experience. There's no cockiness or arrogance. Just curiosity and wonder.

At one point, Schmitz's favorite dog, Honey, died. Later, he has an OBE in which he saw her again.


"I did not see any other beings around her nor did I travel through a long tunnel to meet her. This was the first times [sic] in my life that I realized animals have souls that live on forever, just as human souls do." (pg. 47)

I was really quite amused when he wrote about the beings who I call the "invisible helpers." He'd be flying along side them and try to engage them in conversation, but they'd act all stoic and businesslike:


"Whenever I would inquire who they were and what their intentions for me were, my guides either maintained a stony silence or told me that they weren't here to answer my questions." (pg. 57)

That hits close to home. On 30 July, 2019, I had an OBE in which I was flying and my eyesight wasn't clear, but I felt someone holding my left arm. I looked down and saw a helper's hand gently holding my arm as we flew. I said, "This is cool. Who are you? Are you my guide?" No answer. I asked, "Can you speak?" No answer. I said, "Okay, no worries. Let's just fly then."

Schmitz gives some interesting narratives, like when he passes along a message from his dead grandpa to his mother. (pg. 51) Or when he is brought before a strange "Council of Elders" who proceed to talk about him while he's standing there, and finally they decide "No, we do not want him at this time." and he's dismissed. (pg. 60)

Another interesting thing is that he notes how, except for the "Council of Elders" experience, everyone he meets in his OBEs seems to be about 50 years old, even if he knew them as much older (like grandparents):


"Another somewhat strange aspect of these spirits was that almost every single one I ever saw appeared to be adults of about fifty years of age. I never once saw any children." (pg. 105)

Interesting indeed. For what it's worth: I've seen children in my OBEs: both spirit children and in-the-body children.

In all his 70 or so years, he only had two encounters with something he describes as "evil." In the first case, he simply aborted the OBE and that's that.

The second encounter was much more intense and scary. A monstrous entity tried to trap him in some kind of tornado-like vortex. Once again, he escaped by aborting the OBE, only to find out--to his horror--that the entity hung around near a utility building outside his house. He went outside, faced down this hideous demon, and kept repeating over and over "God made me, God made you, and he is more powerful than you are. I am a part of God and I am a child of the light, so you cannot harm me." The beast stood his ground, but so did Schmitz, until finally the entity exploded into a million pieces like dust. He was so scared that he never set foot on that spot in his yard again.

In chapter 25, Schmitz has a face-to-face meeting with Jesus Christ. Again, it's rare in the literature, but it's not unheard of. In fact, I recall more of these than animal encounters. Click here for my blog article on the subject.

Toward the end of the book, he gives some philosophy based on both his experiences and the other books he read. For example, he states:

It's all pretty basic new-age stuff, for example, his belief in reincarnation. But it's very humble and not preachy at all.

Starting on page 119 there's a "Part Two" which is a channeled commentary and explanations from some guy named Robert Shapiro. I've read tons and tons of channeled books (Seth, Michael, Betty, Lazarus, you name it; I've got a whole book shelf dedicated to it) and I didn't find this section interesting at all. Just saying.

The biggest problem I had with this book is that Schmitz wrote too much about his in-the-body life and not enough about his OBEs. He wrote about his kids, his divorce, finding and marrying his second wife/soulmate, his starting a multi-million dollar business, his losing everything and having to start over, his moving to different states. The book even has several photos from his life, like his dog, Honey, his wife barrel-riding atop her horse, his truck, his speedboat, and a photo of him in when he was 21, tuning up an old 1932 Ford Coupe. It was an interesting biography, but it wasn't focused enough on the actual OBEs. That would have made it better.

It's about 150 pages with slim margins and smallish-font, so there's plenty of content. The book's organization was good. The writing was mature and well-thought-out. The stories were interesting and genuine. I didn't find many typos or grammar problems. This was much better than I expected. I'll give it 3 and 1/2 stars out of 5. There are better OBE books in my opinion, but this one is enjoyable and really down to Earth. Well, given this subject!