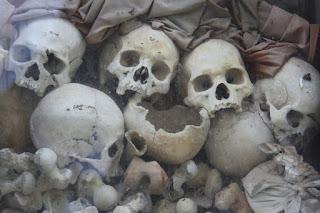 Hello all you ghosties and ghoulies! Halloween is just around the corner, so I wrote this article just for fun.

I'm often asked, "What's the scariest thing that's ever happened to you in an out-of-body experience?" It's a fair question.

Fear is the biggest barrier to overcome to induce OBEs, so I really hate fear-mongering. It seems so counterproductive. At the same time, I don't want to shield you from the truth; you should know what you're getting into, right?

Just attempting to induce an OBE itself can be a scary business because you're confronting fears that are hardwired into your brain: fear of the unknown and fear of death. While trying to induce OBEs, I've seen strange foreboding shadows and lights that move around the room, felt strange touches on my skin, and of course, heard strange "disembodied" voices. I've experienced many strange things from my article on The Guardian of the Threshold. It's all a bit unnerving. But understand this: I've been afraid during the OBE attempt a lot more than in the experience itself. Once I get into the OBE itself, I'm usually golden.

I recently (Thursday August 22, 2019) did a live Facebook chat where I mentioned my "astral lynch mob" experience, so I thought I should explain that.

When I wrote my second book, Lessons Out of the Body in 1999 (published in 2001), I wrote about my scariest OBEs in a chapter called "Astral Lynch Mobs." It had narratives for all the OBEs I'd had at the time that were even a little bit scary. Since then I've had a few more, but nothing significant. Here's what I wrote in that chapter:

The entities I met out of my body were not always as friendly and benign as they were in the experience with the master and his students. I had an occasional run-in with astral entities who were not so friendly. I want to stress that negative experiences are extremely rare in the literature. The vast majority of OBEs are positive and uplifting. Of the hundreds of OBEs I’ve had, only a few that were negative, and they’re all presented in this chapter.

I had my first OBE encounter with negative entities in October of 1982:


This morning I woke up early.  I planned to go back to sleep, but I found myself in the best state of mind for an OBE. I knew exactly what I needed to do to get out of my body. I visualized that my mid-section was swaying up and down. Then I sort of lifted myself above the scene. By an act of will, I moved into the mid-section of the part that was swaying, and doing so, put my consciousness into my astral body.

Immediately, I came out of my body and was propelled forward. I looked around, but I didn't recognize my surroundings. I seemed to be in a completely astral atmosphere. The surrounding space was completely black, as if I was in deep space, but without stars.

Around me were objects and people. The people I saw didn't look evil, but they didn't look friendly either. One group of these people was to my right and about thirty feet away. There were about five men and women, and they were standing by an object which seemed to be a table of some sort. Their clothes looked awkward compared to today's fashions. They looked dirty. There were two men to my left, about twenty feet from each other. The one toward the rear was looking with anticipation, as if he was waiting for a little “fun.” The nearest man looked like he was prepared to fight me. He looked mean and hostile and I had the distinct feeling that he intended to harm me. I could tell from the people’s postures and facial expressions that I was being accosted by an astral lynch-mob.

There was another man who was close to me, to my right, and I thought he was carrying a weapon, like a sword or a club. Obviously he was holding the weapon in anticipation of using it on me. I thought, “Well, if I take off and fly right between them, I might be able to avoid harm.” Then I thought, “But what if I get caught instead?” I looked at the man to my left. I thought, “I can probably defeat him without any trouble, but there are too many of them.” Finally I just thought, “No way.  I don't want any part of this. I'm not going to mess around. I'm not taking any chances. I'm getting out of here right now.”

Not turning at all, I backed up and allowed myself to fall backward into my body. I blacked out for a second, then I woke up inside my body.

Since that experience, I’ve exercised a little more caution in my OBEs. How far can you trust a spirit? On the positive side, there are religions based on establishing contact with spirits(1), which obviously involves a certain level of trust. Still, the Bible sternly warns people to not get involved with spirits (2) so I’ve always had a general distrust of them.

Someone once asked me if I believed in ghosts. My basic response is, “Believe in ghosts? I am a ghost!” When I have an out-of-body experience, I’m in the same condition as a ghost. My point is this: When someone dies, they leave the body behind, and from that point on they’re permanently a spirit. Dying doesn’t necessarily make a person better (or more knowledgeable) than they were when they were alive. Just as there are living people with good and bad intentions, there are also dead people (spirits) with good and bad intentions. So I always approach spirits with a certain amount of caution, as illustrated by my second negative OBE, which took place in March, 1984.


This morning I was sick, so I had been dozing off and waking up for hours. I woke up, but I didn’t realize I was out of my body. Suddenly, I heard a voice coming from a specific point in the air above my feet.  The voice surprised me a lot. I looked very hard, but I couldn't see any source for the voice. Still, I had heard spirit voices on rare occasions in the past, so it didn’t bother me.

The voice was loud and clear. It was a man's voice, authoritative and commanding. It addressed me: “Robert Peterson, you must do exactly as I say. Speak the following words...” The voice then said a word in a foreign language, and commanded me to repeat it.

I'm not stupid, and I don't trust spirits very much. The voice didn't seem malevolent, but I was leery of it anyway. I was sick, and I didn't feel strong enough to handle a potential danger. Deciding it was better to be polite, I mentally said directly to the voice, “I'm sorry, but there's no way. I don't even know you.” I was still amazed that the voice was so loud and clear coming from nowhere.

Still, I wanted to say something, some words of power. I remembered some words that seemed powerful from a song. [He is Sailing by Jon and Vangelis]  I spoke directly to the unknown voice and said the words from the song: “Cocasaya Tay Toca.” I don't know what the words mean, but it is a spiritual song, so I felt as if they were powerful words of spiritual love. The next thing I knew, I woke up inside my body. It was only then that I realized I had been out of my body.

Here is the third and final OBE from October 1996 where I felt unsafe or threatened:


I induced the OBE state, but my consciousness was not strong. I stood up and felt a pain in my left shoulder. Slightly bewildered, I turned around to see what could have caused the pain. To my surprise, there was an annoying-looking man there with a grin on his face.
I decided to try to get away from him, so I walked away, but he walked after me. He took another poke at my shoulder with his right hand, which sent another painful shock to my shoulder. I yelled at him, “Stop that!” Then I walked away again. I wasn’t afraid at all. This time I tried to get away from him by quite a distance, but he followed me and kept zapping me. I yelled at him again, and used thought power to move to a location outside the house. Unfortunately, he followed me there too, and zapped me again. I decided that this pest would not leave me alone, so I deliberately ended the OBE.

The easiest way to avoid confrontations like this is to return to your body.  Under most circumstances, simply thinking about your body will instantly bring you back to it.

Over time, I got rid of the fear and learned how to protect myself, both physically and astrally. Click this link to read that book's chapter on psychic protection for OBEs. Several years later, I had an “Almost-There Experience” [i.e. an experience in which I'm only semi-lucid] where I was surrounded by another angry mob, but this time I faced them fearlessly, fought them and beat them up. Since that incident, I haven’t been bothered anymore.

Most of my early exploring was done “on my own.” My “general distrust” of spirits usually kept me from interacting with them during my OBEs. Eventually, I learned that they can be very helpful in exploring the OBE world. You can go a lot further with them than without them.

There's a big difference between being afraid and being startled. We can all be startled, because that's an automatic defense mechanism built into our brains for survival. We react very quickly to sudden perceived threats without even having to think about it. That's a reaction, and it can't be cured. But "fear" is an emotion that blocks you from moving forward, and that can be eliminated with experience. Horror movies with a big "startle" factor aren't disturbing to me, but psychological "fear" movies can be, if they're done right.

Several times, while attempting an OBE from bed, I went deeper and deeper, ever so close to the border between waking and sleeping, when suddenly I've seen an ugly, horrifying face jump at me, and it's very realistic. It startles me awake. These are startling, but not necessarily frightening. I'm startled, but not afraid. When I open my eyes, my heart is racing, and the OBE attempt is ruined.

Different people are afraid of different things, and that may also affect OBEs. For example, some people are afraid of getting lost in an OBE, but rest assured: I've been so far in the deep blackness of space that the nearest star looks light-years away. Still, I wasn't afraid; just awestruck. And I had no problems returning to my body.

Once or twice I've had entities deliberately try to scare me. I see right through their nonsense, and stand my ground, unafraid. When they see I'm not frightened, they seem to be surprised, then alarmed. Then they become afraid of me and make a hasty exit.

Take comfort in the knowledge that in the 40 years I've been doing this, I've only experienced a handful of OBEs in which I felt unsafe, and those were easily handled.

Just remember that fear is a defense mechanism designed to preserve your physical body, and when you're in an out-of-body experience, your body is safely "elsewhere," so you don't need it.

The prevailing belief is that if you keep your thoughts and emotions positive and high, it will protect you from the vast majority of negative experiences.