Review: Eyes of an Angel by Paul Elder

Review: Eyes of an Angel 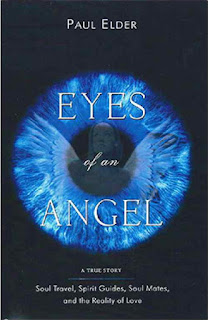 I got this book a few years ago and I can't even remember who sent it to me. It might have been the author himself, but I seem to recall receiving it from a friend. I started reading it and got about a third of the way in, then for some strange reason, I regretfully got distracted, lost track of the book, and never saw it again. Until now.

Fast-forward to 2019 when I contacted an acquaintance who I first met at the Monroe Institute during one of William Buhlman's "Out of Body Intensive" classes. I was organizing a group of friends to take Buhlman's last scheduled class in 2020--a kind of family reunion--and I tried to talk her into joining us.

She said she'd love to go, but already scheduled a week-long seminar that conflicted. I asked her what seminar had enough pull to preempt William Buhlman? She said it was a class given by Paul Elder. Hey, wait-a-minute, I thought. I've got a book by Paul Elder somewhere. I need to track it down and finish reading it! So I did just that. It had been so long, I started it over from the beginning to see it with fresh eyes.

This book is kind of like Kim McCaul's book, Multidimensional Evolution, or even my second book, Lessons Out of the Body, in that it's kind of a spiritual journey: It follows the real-life spiritual adventures of the author, how his OBEs fit into his spiritual path, and the context of his life, and what he learned along the way. And a lot of his experiences are similar to mine. In fact, Elder and I did many of the same out-of-body experiments and had the same frustrations. It's interesting to note that, like me, Elder is pretty resistant to hypnosis (pg. 221).

Elder grew up in a huge family (he was 10th of 11 children! I was 5 of 5), and had two near-death experiences as a child, which makes for a remarkable story. You can tell from his descriptions that his OBEs are genuine. For example, early on I was struck with the accuracy of this description:


"I became aware of a strange vibration gently rocking me. Every molecule in my body seemed about to burst with this bizarre, bubbling electrical energy." (pg. 4)

He also describes the wonder of watching the lightning of a thunderstorm from the out-of-body state.

Like many OBE authors, he went through a phase where he had to find proof that his OBEs were "real":


"You can't imagine how delighted I was with the confirmation. Astral and physical realities had blended perfectly." (pg. 66)

During one of his OBEs, he got some pretty good veridical evidence: He managed to see an "ugly jacket" that had been purchased while he was away n a trip, and he had never seen before his OBE. (pg. 152)

From time to time, when life got too busy, his OBEs faded away. But then he'd visit The Monroe Institute and take one of their courses, and come back all enthused and full of energy. (I heard he now teaches classes at TMI, which seems fitting.)

Also like me, he did lots of experimentation. He recounted how strange it was to look into a mirror and NOT see his own reflection, but just the room behind him. (pg. 67) (FWIW, different people see different things in a mirror. When I tried this, I surprisingly saw the reflection of my friend Brad's face in the mirror, but I was at Brad's house in my OBE. I wrote about it in chapter 26 of my first book. Click here to read my full account.)

Like me, Elder managed to scare the crap out of an in-the-body cat during an OBE. (Pg. 88). (My account is in chapter 21 of my first book: click here to read it.)

But it's not just the OBEs. Elder has valuable life lessons in this book. For example, I loved this quote:


"The message was clear: it didn't matter one bit in life who won or lost, or how rich or successful we became. When we finally pass from this world, the only thing that will matter, the only thing of lasting importance, is how we treated others along the way." (pg. 92)

He has some fabulous OBE narratives. For example, an encounter with Universal Consciousness, or "God:"


"From the mindless destruction of war to the purposefullness of a hummingbird in flight, I experienced and became a part of everything that I touched. It was at the same time an explosion of emotion and a mystical encounter with the love of God. I suddenly understood the perfection of creation." (pg. 98)

I was interested to read this soul rescue OBE that brought up the language issue:


"I couldn't believe what I was hearing. My thoughts were in English but my words were not. I clearly heard myself speaking Spanish, yet I hadn't a clue how to speak Spanish!" (pg. 155)

In experiences similar to mine, he had trouble trying to contact his mother who had died:


"At various times during the ensuing year I attempted to make contact with my mother while out-of-body, but to no avail." (pg. 119)

Eventually he did meet her in a very touching OBE described on page 120. (I eventually met mine too, but it's not in any book...yet).

About halfway through the book, Elder meets his spirit guide, who calls himself Meldor. He has a series of OBEs in which Meldor gives him discourses on new age philosophy. True or not, this was too preachy for me: this sort of thing is what turned me off in Luiz Roberto Mattos's book Astral Projection As a Bridge to the Spirit World. The philosophy was sound and even has an interesting take on the subjects like Karma and soulmates, but the OBEs just sounded a bit too staged or contrived. If I wanted new age philosophy, I'd reread one of the many Jane Roberts "Seth" books I love. Luckily, Elder doesn't harp on this or push it too far (as I felt Mattos did.) In fact, he eventually loses touch with Meldor and never hears from him again, much to his dismay. Eventually he meets up with a new set of guides, but he never gets lectured by them (thankfully).

Elder also has a long and detailed OBE in which he does something I've never done: apparently visits the library of the Akashic records:


"The structures that I had seen, such as the library, seemed absolutely real. The stone steps leading to the front entry were as solid as anything I had experienced...These things were real, perhaps more real than the structures I was used to on Earth." (pg. 144 - 145)

He also had some very interesting OBEs in which he apparently found himself in another person's physical body:


"I couldn't believe it. For a second time I had somehow ended up in someone else's body. This time I had actually seen his face. He appeared to be much younger than me, perhaps in his early twenties. (pg. 161)

This is extremely rare in OBE literature. The only other account I remember of this was from Robert Monroe's first book, Journeys Out of the Body, and I was more than just a little skeptical about that claim!

Like me, he also had an encounter with Jesus Christ. (You can read my account in this blog article.)

Like me, he also had an experience of "astral sex." His was much more involved than mine, but matches my observations 100 percent. Here are just a few small tantalizing excerpts from his narrative:


"As our bodies flowed together, our energy and molecules seemingly occupying the same space, a growing heat began to vibrate in my heart...Every particle of my being on fire with desire, I couldn't tell whether it was a physical sensation or a spiritual one...Beginning at first as a low rumbling vibration, it hit me like a freight train. From deep within, a wave of tremendous orgasmic energy exploded through every cell in my body...In a frenzy of ecstasy, I hung on for dear life." (pg 185).

You get the picture. It paints a very intense spiritual experience, and the full description is not to be missed! He and I are in complete agreement that astral sex is very different from both physical sex and lucid dream sex:


"Had I just experienced a sample of the spirit world's version of sex? Could I even call it sex? There was certainly nothing in the physical world to compare with it." (pg. 186)

Most surprising of all was that he seems to share everything, including this, with his wife, Candace, who is painted as very loving and understanding, which is another thing Elder and I have in common.

But the real value in this book is not so much the OBEs themselves, as the sentiments and lessons behind them (a point I tried to make in my second book, Lessons Out of the Body). For example, I loved this quote:


"The spirits' thoughts continued to flow through my mind. Nothing in our physical dimension is of any consequence or lasting reality. The only enduring reality is love. To live without opening our hearts denies the most beautiful and enabling aspect of the human experience." (pg. 180)


"If there's one thing that I've come to realize over time, it is the more I learn, the more convinced I am how precious little I actually know." (pg. 219)

And I'll close with one last quote:


"The only thing that will truly matter is how we treated others along the way. That's the importance of love." (pg. 227)

There's plenty of content, weighing in at 233 pages with good margins and font. The grammar and spelling were flawless. It is professionally written, which is surprising, given that it was supposedly the first book he's written. This is a wonderful OBE book and I highly recommend it. It's not Jurgen Ziewe good, but it's very good. I give it 4 out of 5 stars. It was touching, inspiring, and hopeful, but there are no OBE techniques in the book.