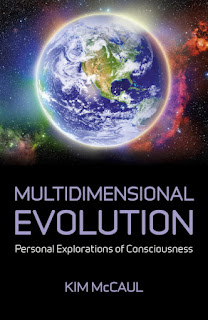 Author Kim McCaul recently interviewed me for his podcast of the same name, and he was kind enough to send me a copy of his book all the way from Australia. Naturally, I reciprocated and sent him a copy of my book as well.

McCaul won my heart right away when he wrote this:


"Don't believe anything! Experiment and have your own experiences." (pg. 7)

With the title Multidimensional Evolution, I fully expected it to be like Multidimensional Man, by Jurgan Ziewe (my favorite OBE book), but it wasn't anything like it. The book is basically the story of Kim McCaul's spiritual journey, from a materialistic college student who hits rock bottom, igniting his spiritual quest. It's broken into three primary parts:

The first part of his journey deals with his stay at a meditation center in central Java called Shanti Loka, where he meets a spiritual master by the name of Pak Suyono. He has some interesting and powerful experiences. I especially liked this quote:


"I was watching a sunset at the beach and suddenly realized that the rays of the sun that were shining directly at me were actually doing the same for everybody, and that in fact each and every one of us is the center of the universe with infinite unconditional love shining on us, whether we realized it or not." (pg. 39)

My favorite thing about Pak Suyono is that he taught the era of monks and gurus is coming to an end:


"...we are now in a time where consciousnesses will pursue evolution through self-directed and multifaceted avenues while living a productive intraphysical life with partners, families and gainful endeavors." (pg. 177)

Amen to that, and this is a central teaching of this book. Your journey is yours alone. If you like where you are on your spiritual path, shine a light for other travelers to see. But don't fall into the traps of thinking "I know better than everyone else" or "I need to follow this guru because he/she knows better than me." We're all just travelers with the same destination. Be a student and learn, because we all can learn from one another. Be a teacher and teach, because everyone's lessons are unique and valuable.

The second part of his journal is when McCaul met and became part of a group that revolved around a woman named Leia, who claimed to be a "walk-in." In other words, there was a woman named Linda whose time was up (supposedly), but instead of dying, a completely different soul stepped in and assumed ownership of that physical body and assumed a role of spiritual leadership. I must admit, McCaul's description of Leia and her spiritual claims were somewhat hard for me to believe (but I've always been skeptical like this). It involved a multitude of weird spiritual experiences, including experiences with extraterrestrials (ETs) (pg. 91). Still, I've never met the woman and he has. True or not, it was obvious that her effect on him was profound and spiritual. It allowed him to deal with past-life entanglements and karmic bonds. He needed those lessons at that time.


"The point is that past lives have a very real impact, and although their influence may seem subtle, they actually affect all areas of our manifestation and interactions." (pg. 102)

Out-of-body experiences--or projections of consciousness--were an important part of Leia's teachings and she apparently helped McCaul to have them. He does share some tantalizing hints:


"The key point to understand is that we are all surrounded by extraphysical people all the time and that they interact with us more often than we realize. Developing our own energetic and psychic capacity means that we can take greater charge of these interactions. Rather than allowing ourselves to be the unconscious playthings of extraphysical consciousnesses, we can take the energetic initiative, making our interactions deliberate and focused on assistance." (pg. 107)

He carries this thought further much later in the book:


"Once you realize how frequently we are all used as mediums by extraphysical consciousnesses, that is, once you realize how often physical people unconsciously channel the thoughts of extraphysical people, even if only for a few moments, you start listening to the people in your life as potential unconscious mouthpieces for your helpers (but also for your intruders!) (pg. 150)

The third part of McCaul's spiritual journey is when he moved to Brazil and became involved with the International Institute for Projectiology and Conscientiology (IIPC) and International Academy of Consciousness (IAC) where he met Waldo Vieira. If you don't know him, Waldo Vieira was a famous author and teacher in Brazil who started a whole movement revolving around OBEs. He invented a whole nomenclature of pseudo-scientific terms to describe OBEs. I was very surprised to read this:


"For Waldo, meat is not only an essential ingredient for human well-being; its dense energies also play an important role in our ability to be of assistance in other dimensions." (pg. 118)

Wow. I didn't know that. I've only read one of Vieira's books, Projections of the Consciousness, and I was surprised at how good it was. I've been told that his other book, Projectiology, is a fabulous (and very big) wealth of information about his research into OBEs. The problem is, amazon.com wants nearly 100 dollars for the book, and I find that too offensively high.

A big part of IAC's philosophy is energetic assistance. Many practitioners perform an energy channeling meditation called "Penta" which basically provides energy to non-physical entities who use it for soul rescues and non-physical help. Even without performing Penta, there's a strong emphasis on lending help.


"The more we focus our efforts on assistance, the more we will be in harmony with our helpers, and we will increasingly be involved in projects managed by more evolved helpers." (pg. 153)

I loved this quote:


"Paradoxically, it is through delving into the abyss of self-centered suffering that we become able to soar to the heights of compassionate assistance to all other consciousnesses." (pg.  126)

Unlike other Vieira-based books (like Nanci Trivellato's The Vibrational State) this one doesn't really extol the virtues of the VELO technique. McCaul seems to favor a "Closed Loop" energy technique instead, which is much like the Taoist energy exercises I learned in T'ai Chi classes (and appears in my latest book). This is also taught in Daniel Kelley's book, Behind the Veil, and Robert Bruce's book Astral Dynamics.

The last chapter, "The Multidimensional Evolution of Consciousness," was perhaps my favorite. In here, he emphasizes some grounded, down-to-earth principles. For example:


"Yet over the years, I have come to appreciate that we can become 'experience junkies'. In other words, it is very tempting to pursue experiences for their own sake. After all, it feels great to enter an exalted state of consciousness or explore extraphysical dimensions. But then what?" (pg. 176)

I'll give you one last quote from that chapter:


"My experience in this lifetime has been that, rather than achieving new or previously unexplored levels of awareness, most of the evolutionary dynamic seems to be aimed at trying to regain an awareness we already enjoy when we are extra-physical. In other words, as we work towards increasing our multidimensional awareness, we are really just working at becoming more of ourselves, at bring more of our original self into this dimension." (pg. 189)

The book is 206 pages, with a good font and tight margins, which means there's a lot of content. The book was professionally written and edited: I did not find a single mistake in grammar or spelling. It was very easy to read.

Kim McCaul is humble and honest teacher, not boastful or arrogant. The book is well-rounded in its spirituality, and grounded and centered in its approach. Its teachings are diverse and level-headed. Unfortunately, it contains no OBE techniques or instructions. I would have liked more OBE narratives. So this isn't as much an "OBE book" as it is a journey of spirituality.