Review: Apprenticeship to a Ghost

Review: Apprenticeship to a Ghost 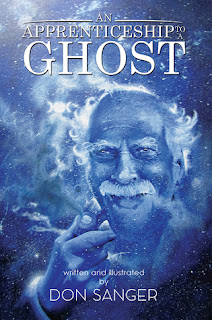 Today I'm reviewing Apprenticeship to a Ghost by Don Sanger. The author was kind enough to send me a copy a while back.

The book features many out-of-body experiences, which makes for a great backdrop. Like all books, there's both good and bad. I always like to start with the bad first so I end on a positive note.

The spelling, grammar and writing were actually very good (except for a few out-of-place commas) and the writing is mature, but the book needed serious proofreading. There are several instances where the wrong word is used, probably due to a lack of proof-readers and a spell-checker that was done in haste. So "might have had" appears as "might have hand." A "pint of lager" is presented as a "pint of larger." And "I was rather hoping" is now "I was rather hopping." Which makes for some interesting visualizations! "Exercise" becomes "Excise." "Morale" becomes "Moral." Even "astral plane" is given as "astral plain" in a couple places.

There were lots of these, and I know how it happens: when authors spend a lot of time editing a book, they get "too close" to the work and stop seeing mistakes that are glaringly obvious to everyone else. I'm as guilty of this as Sanger with every book I've ever written. Even my latest book has several mistakes like this. Authors are human and we make mistakes. Maybe I'm just more sensitive to it than most.

This book is visionary fiction (VF), and I tend to not like that genre in general. Oh, sure, there are a few outstanding VF books. Richard Bach's book Illusions is probably my favorite, and worth every penny, but Jonathan Livingston Seagull? Meh. Thea Alexander's 2150AD was also good. The problem I have with VF books is that there's often no plot, no conflict, and no tension. It's all about the message, not the story. That's what drove me nuts about James Redfield's Celestine Prophecy books: I'm just not a fiction lover, and when I take the time to read a novel, I want heart-pounding, blood-pumping, page-turning, nonstop, action-packed drama. Think Stephen King's Rose Madder or Firestarter. (One of my favorite OBE-oriented novels is The House Between the Worlds by Marion Zimmer Bradley, but it's not VF and it has no underlying spiritual messages. But I digress.)

In Apprenticeship to a Ghost Sanger tries to wrap the inspirational messages around some tension but it was not enough to enthrall me. There just wasn't enough conflict in the story.

There were several lead-ins where Sanger could have blasted the conflict, but didn't. For example, he could have made the out-of-body experiences themselves more tense and fearful (at first), playing on the apprehension of the main character, Don, but he didn't. I guess I can't blame him for not wanting to paint OBEs with a canvas of fear because OBEs are usually not like that.

He could have made the encounters with the ghost more scary and tense (at first). He could have made Don's relationship with his girlfriend, Sharon, more strained with bickering, fighting and threats. His family could have accused him of losing his mind, and threatened to have him committed. He could have heard scary noises, gotten dark alley beatings, and acquired stalkers. His grades could have suffered and his future jeopardized. He could have lost his job. He could have questioned his sanity. But nope. There was not enough tension. It didn't "grab" me with in-your-face "story" I wanted.

Still, I read the whole thing and I did enjoy it. The last third of the book was actually much better than the first two thirds. Sanger's descriptions were rich and colorful, and his musings were deep. You just need to go into it with certain expectations.

Plot or not, a good VF book should inspire you and make you see things in a brand new light. It should open your mind to new ideas and new possibilities. It should be mind-expanding. Apprenticeship to a Ghost does do all that. Much of the book takes the form of inner dialog, where Don is thinking to himself, and he thinks deep philosophical thoughts, and interesting thoughts: Thoughts about God, about communication with the spirit world, about reincarnation of animals and people, planes of existence, vibrations, spirits, over-souls and about the hierarchy of souls. Lots of deep thoughts, and I liked that.

The book has a feeling of honesty and authenticity, and I often paused reading to ponder whether Don Sanger went through some of the things his main character does. It helps that the main character's name is Don.

One of my favorite quotes of the book is:

Agreed! Another great quote is:

I was pleasantly surprised about two thirds of the way into the book when "Don" is taught a valuable energy technique: You hold your hands in front of you and repeatedly push and pull a "chi ball" or "energy ball" between your hands.

For many years I've actually done this exercise in bed while preparing for sleep. Not every night, but many nights. Here's my version: Lying face up, I lift my arms in front of me and push and pull on an imaginary chi ball between my hands. I actually hold my hands so all fingers point at each other, and try to manipulate the energy in the space between them. (This is a variation of an exercise I used to do many years ago in Tai Chi class while standing up). I also circulate the energy around my arms from left to right arm and across my shoulder blades. Then I imagine the energy accelerating. After maybe 30 seconds of this, I put my hands down, roll over to my side and go to sleep. That's what I do.

So imagine my surprise to find a similar technique in this book! In Sanger's version, the hands are held up like in prayer, and the space between them is pushed and pulled. It's a very similar technique, and I was quite surprised to find it here.

I also found another valuable technique in this book that I use regularly. In this one, you try to create an ever-expanding bubble of love that starts out small and grows to encompass the entire universe. I actually gave the details of this in my previous blog article, Raising Your Vibrations before I saw it in this book. The book also stresses the need for developing positive energy, as I did in that article. Funny how the pieces of the puzzle always fit together so nicely!

I resonated with the main character, Don who, like me, is changed because of his experiences. For example, develops a distaste for horror movies, similar to me.

The book is 249 pages with a smallish font and narrow margins, which means there's plenty of content. You'll get your money's worth.

If you like my work, visit my website, robertpeterson.org, where you'll find lots of other free OBE/AP advice and links.