Review: Astral Projection and How to Accomplish It

Astral Projection and How to Accomplish It 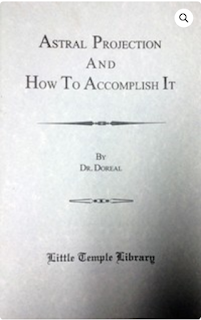 Today I'm reviewing Astral Projection and How to Accomplish It by Dr. M. Doreal.

I bought this tiny and obscure book many years ago; probably back in 1980. I probably paid less than 5 dollars. Today you can buy it online for 10 dollars, but it's not worth it. It was published by an organization I know nothing about: the "Brotherhood of the White Temple" in Sedalia, Colorado. Oooh, sounds like mysterious and forbidden secret occult knowledge. What's not to like, right?

Unfortunately, the book doesn't live up to expectations.

Some of the beliefs he teaches seem reasonable. For example, he says that it's not that we're in our physical body, astral body, or any other body. We're in all those bodies already, and it's just a matter of which one we're focused on. I kind of liked that.

Other claims are much more dubious. For example:

And then there are the claims that sound like complete nonsense to me. For example:

I found this interesting:


"I might mention here never to attempt conscious projection immediately after eating a heavy meal or while lying flat on the stomach: these are the only two 'don'ts.'" (pg. 18)

Doreal only gives one astral projection technique, and it's actually quite interesting. It reminds me of some of the motion-based techniques I've used.


"Allow the consciousness to sweep slowly up the body. Do this for two or three minutes. As you come up, be conscious of the body below, and will for it to go to sleep - first the toes and then up until you draw your consciousness into the head where it centers automatically above and between the eyes on the pituitary gland. Then move it towards the back of the head. Move it backwards and forwards two or three times, like a shuttle, back and forth as in a sewing machine. You will discover that one side seems a little weaker than the other. Do not push with a lot of force - just let it drift back. If you feel pressure holding it back, just press a few more times, until you have a rhythmic swing back and forth. Then let it rest at the back of the head on the third eye. Then visualize a light of any color you wish, spinning around and around. Then will for that light to expand and contract. Repeat the expansion and contraction further each time until you finally feel as if your head is full of light and pulsing with that expansion and contraction. When you get that right, turn loose of it and you will find it will go on contracting and expanding without you're concentrating on it..." (pg. 19)

Later he goes on to say:


"Center the consciousness on the pineal - visualize a light - swing it back and forth like the pendulum of a clock and get into rhythm. Find the side which seems to give the most and swing a little farther each time, then swing it down and through a curve. It is that movement of consciousness which swings you into the Fourth Dimension." (pg. 20)

What struck me is how similar that is to my technique of developing a gravity between your consciousness and a swaying hypnagogic image. (As described in this blog article and elsewhere). Doreal is using a light rather than a hypnagogic image, but there are a lot of similarities.

The book is only 22 pages long, with small footprint and my copy has a large fixed-width font.

I'll give it 1 1/2 stars out of 5, mostly because it's too short and has some misinformation. It's not the worst book I've read on astral projection, but it falls way short of other books.