Review: The Art and Practice of Astral Projection

Review: The Art and Practice of Astral Projection 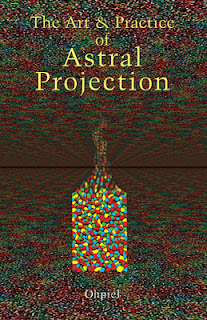 Today I'm reviewing the book The Art and Practice of Astral Projection by Ophiel.

This is one of the earliest books ever written in the modern era about astral projection. It was first published in 1961, the year I was born! So it predates even Robert Monroe's first book. It's also one of the earliest books I purchased for my OBE book collection in the 1980s. Unfortunately, I was turned off by the book back then because it takes a more "occult" approach to the subject. Looking at it with 40 years more experience, I appreciate the book a lot more now than I did when I was young.

Ophiel's real name was Edward C. Peach. Since I like pirates, a couple years ago, I made this funny meme: 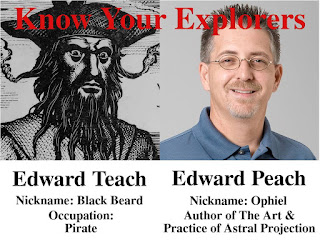 This book is so old the author bemoans the lack of books and public information about astral projection. He complains about earlier authors and it even gets humorous. For example, he has a good dig at Yram:

"Yram tells all about HIS experiences and his experiments in Astral projection BUT HE DOES NOT TELL HOW TO DO IT. (He did it thru the symbol method). So what on earth good is this book to you, and your desire to learn this Art, if he does not tell HOW HE DID IT. Yram calls the method he used "An open secret" "known to all Occultists" Open indeed!!!" (pg. 97)

He also has a dig at Sylvan Muldoon:

"In my humble opinion Mr. Muldoon is a natural projector and I don't know if he can teach others to project for themselves or not. I wrote to him years ago asking this question but I received no satisfactory answer to my question and so I made no further attempts to question him." (pg. 97)

He even goes on to say:

"I have, at one time or another, tried to contact every known Occultist in the world that was living. I made contacts but none of them were worth very much. I found out very little of value. THEY WERE ALL WHY MEN. AND THERE WAS NOT A HOW MAN AMONG THEM." (pg. 97)

He does, however, give credit to the earlier authors and acknowledges them for their contributions to the study of astral projection.

So why the digs? In reading the book, I got the impression that when he was young, Ophiel wanted to learn Occult secrets, especially astral projection, so he contacted several occult societies, such as the Golden Dawn. He was turned down by all of them for various reasons, so he was forced to learn on his own. He was then greatly influenced by the articles and book by Oliver Fox, and from there learned Fox's OBE technique, "The Dream Method," which is basically inducing a lucid dream, then forcing yourself out of the dream, thus turning the lucid dream into an OBE. This turned out to be a good thing because then he wasn't bound by their rules or oaths and forced to keep their secrets. From there he developed his new OBE techniques, and presents them in this book. I might add, with a certain amount of disdain for people who would hide the knowledge away as occult secrets.

The book contains four main astral projection (out of body) techniques. The four are:

The Little System is actually the earliest known account of the "Target Technique" as taught by William Buhlman and several other OBE authors. This is a good solid OBE technique. I've always liked Buhlman's description, but Ophiel claims to have developed it himself. So perhaps Ophiel's is the most original.

The Dream Method, as I said before, is Oliver Fox's technique of inducing a lucid dream, and then turning your attention away from the hallucinated dream world to a greater out-of-body perception.

The Body of Light Method is the truest "Occult technique" in the book. This is basically where you spend time visualizing and enforcing an imaginary second body, the "body of light." Ophiel's description is probably better than other versions in occult books because he's heavy on technique. For example, he has you spend a lot of time looking at your body parts and moving them physically, saying the body part's name aloud, then imagining the second body (the Body of Light) moving at the same time. This procedure reinforces that you're actually moving both bodies, astral and physical, at the same time. For example, look at your thumb, say the word "Thumb," move your thumb, and imagine your body of light's thumb moves at the same time, etc. Then you do the same thing with your eyes closed. Then you try to do the same without actually moving them physically, but still trying to "watch" the body of light move in your imagination.

He gives a detailed ritual for this technique, mostly based on the teachings of the Kabbalah (or "Cabala"): ancient Jewish Mysticism. So he has you face different directions, invoke holy names of God, etc. Rituals like this have their place, but I've never really believed in them as anything but a psychological tool. And if they work, why not use them, right?

This is one of the earliest descriptions of using visualizing symbols to induce OBEs. A few authors, such as J.H. Brennan and Graham Nicholls, describe this technique. Ophiel uses Tattwa symbols. He says, in part:

"I am here going to repeat the before mentioned Truth - the basic fact – that all outer things come from the Inner and also that the Inner is the Real 'thing' while the outer is the symbol only of the Inner 'THING". I will also repeat it until it runs out of your ears that we (the fallen souls!) cannot deal, successfully, with this outer world in any way other than thru the Inner world first." (pg. 75)

He asks you to construct paper representations of basic symbols: egg-shaped, circle, triangle, crescent, oblong, etc., color them with prescribed colors, etc. Then practice looking at them, closing your eyes and visualizing them, etc.
J.H. Brennan offers a lot more options, with a lot less ritual and pretense.

While Ophiel is heavy on technique (which is good), he also shrouds the techniques in a fair amount of occult ritual, which for me is a turn-off.

The author offers some interesting observations about OBEs, for example:

"What I would like to have you understand for now is that, almost without exception, when you make ANY projection you first "hit" the Etheric plane." (pg. 37)

"It seems to be true that there is another life 'over there' that you live when you sleep 'here.'" (pg. 38)

I have seen this myself, so I agree. I also agree with this:

"...once you have made a projection from the physical body to the etheric plane, and after you have been there for a 'time', there is a very strong tendency to continue to project again and then again to the next inner plane!!!" (pg. 44)

He also talks about exit symptoms, like vibrations and strange noises.

"The actual change–birth-over–into–the–Etheric is often accompanied by the darndest collection of noises that you've ever heard!!!! Bangs. Thumps, Bumps, Rattles, Cracks, Voices calling out names, including your own, and even loud explosions." (pg. 45)

The book is 116 pages with decent formatting and small font, which means there's a good amount of content.

The writing is good, and personable. In other words, it reads more like a fireside chat, not some know-it-all "do it my way" dictate-by-rote teacher. He gives just enough narrative to let you know he's genuine: not just "book learning." It doesn't feel "occult." It's feels right. But because of its age, it wasn't spell checked as well as it should have been, so there are several spelling mistakes. He uses capitalization for emphasis, and he does this WAY too much. He also uses exclamation points way too much!!!!! But all in all it's a good book. I give it three and 1/2 out of 5 stars.