The Out-of-Body Experience: The History and Science of Astral Travel 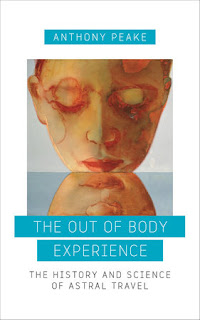 The subtitle, "The History and Science of Astral Travel" is perfect, because that's exactly what it is. Part 1 is the history and part 2 is the science. Peake won my heart right away in the prologue when he wrote:

"My experience made me realize that I had been asking the wrong questions. To try to discover if the out-of-body experience is real or imagined is to miss the point entirely. What I should have been doing was enquiring into the very nature of perception itself and, by implication, the nature of the phenomenal world that our senses tell us is so real." (pg. xvii)

In the first few chapters, Peake covers all the basics of the history of astral projection, out-of-body experiences, and near-death experiences, and he does so with a scientist's perspective. He talks about various religious traditions, like the Kabbalah (Jewish Mysticism), Tibetan Dream Yoga, Blavatsky and the Theosophists, and so forth. He also talks about his own experience and how he became interested in the subject.

In chapter 4, he talks about Robert Monroe, although he seemed to treat Monroe's early OBEs from Journeys Out of the Body the same as his later "Focus Level" experiences, whereas I always had the impression they're quite different. He talks about the laboratory experiments Dr. Charles Tart did with Monroe and so forth.

In chapter 5, he talks about the remarkable Ingo Swann and the experiments he did with Dr. Karlis Osis [typoed as "Otis"] and Dr. Janet Mitchell, which leads into the discussion of remote viewing and non-local perception. In one experiment, Swann correctly identified 8 out of 8 objects placed out of sight in the room, the odds of which were calculated to be more than 40,000 to 1. He also talked about Swann's mission to visit Jupiter in an OBE state. Still, there were problems with controls and protocols that hardened skeptics would scoff at, but that's treated fairly. IIRC, the meow-counting experiment with Swann's cat, Spirit, wasn't mentioned.

In chapter 6 he talks about some of the modern-era OBE groups, such as:

In chapter 7 he talks about Lucid Dreaming, false awakenings, and such. He talks about the relationship between lucid dreaming and OBEs and the work done by Glenn Gabbard and Stuart Twemlow that compared OBEs with lucid dreams and other body-boundary disturbances. This chapter had some mind-blowing observations related to dreams and deja vu. He talks about a guy named Ian Wilson, who had deja vu and whose dreams often came true. According to Peake, Wilson taught himself to lucid dream, then manipulated his dreams from the lucid dream state. In this way, he was able to induce his own deja vu and actually change the outcome of physical reality, essentially making his lucid dreams come true! This is astonishing, and it fits with observations from my 2017 blog article titled "Deja Vu, Synchronicity, Fate, Destiny and the Law of Attraction".

After a while, I noticed Peake repeatedly saying things like "The implications of this are staggering." It became almost cliche'. And indeed they are.

I would have liked more OBE history, covering the early pioneers like Sylvan Muldoon, Oliver Fox, Charles Lancelin and such. Peake mentions a lot of it in passing, but let's face it: it's a lot of information and to do it justice would have made the book a lot bigger.

I felt Peake didn't do enough to examine the evidence of whether OBEs are "real" or hallucination. He did point out the lack of concrete evidence and how OBE perceptions are often wrong, but he could have spent chapters more on this.

Part 2 is "The Science" and that's where this book really shines. Here he talks about the neurology of OBEs, the hypnagogic and hypnopompic hallucinations, the brain's TPJ (Temporo-Parietal Junction), the experiments of Olaf Blanke and Michael Pirsinger, and other scientists.

For example, he talks about psychedelics like DMT and how they work and their relationship to Near-Death Experiences (NDEs). He talks about neurotransmitters that affect the brain, like Glutamate (think MSG--mono-sodium glutamate), and Ketamine, and how ketamine blockades the brain's NMDA receptors to prevent damage caused by glutamate floods. He talks about peptides like alpha-endopsychosin. He talks about endogenous morphines, the body's natural painkillers (think endorphins), luteinizing-hormone-releasing-hormone (LHRH) and its role in sleep paralysis. He talks about the pineal gland and how it generates the sleep hormone melatonin (and possibly DMT) and how it's broken down by monoamine oxidase (MAO). He talks about how melatonin levels are higher than normal in schizophrenic patients. And that's just the start. The book has tons of great material related to the science of OBEs.

But it doesn't end there. Peake also dives deep into the world of quantum physics in an attempt to determine how and why OBEs happen, why they seem so real, and what exactly they are. He talks about the various theories of Albert Einstein (and his "Spooky action at a distance"), David Bohm (think "Implicate Order"), Dr. John Bell, Richard Feynman and other fundamental physicists. He talks about non-locality and the Many Worlds Interpretation (MWI). He talks about how things exist "in potential" until they're observed, which collapses energy waves into matter. He talks about Dark Matter and how light is both a particle and a wave, and how these light waves can mysteriously travel through the "void" of outer space. Oh, and about quantum entanglement. Amazingly, Peake explains these all things in layman's terms that make it easier to understand (by their very nature they will never really be "easy to understand").

It's not just about the science, but how it all relates to OBEs.

The book is also very insightful. One of my favorite insights concerned entanglement and Einstein's "spooky action action at a distance:" when two particles are separated by space but "entangled" and how actions done to one particle somehow mysteriously affects the other. The analogy he presented blew me away: Peake suggests we imagine an aquarium with a fish. Facing the front of the aquarium is a video camera, and there's also a side-facing video camera. If you're looking at both cameras, when the fish turns, the cameras seem to record two different fish that are somehow "entangled." It seems like we are observing two fish that have some kind of one-to-one entanglement such that a change in one immediately affects the other. But in reality, it's all the same fish from different perspectives. When I read that analogy, a light-bulb came on over my head and I got goosebumps. Sounds like many mystics and Near-Death Experiencers who claim that separation is an illusion, right?

Another light-bulb came on when I read his bit about holograms. If you look at a hologram, it shows the image of an object. But when you break a hologram into pieces, each of those pieces also shows the entire object, but smaller. It is as if each area of the hologram contains a recording of the entire whole. Doesn't that just give you goosebumps? Sounds like those same mystics and NDErs who claim that we're all just fragments of one Divine Universal Consciousness, right?

Peake offers some explanations for OBEs and how they relate to the real world, as is hinted in the quote above from the prologue above (about asking the wrong questions.) It all has to do with the nature of perception and our interpretation of it. Peake suggests that we're not really "going out-of-body" in an OBE, but rather, "going within." In other words, we're switching modes of perception to a more quantum (or subatomic) level. What's actually changed is how we interpret these new perceptions. It all gets very wonderfully messy.

I'm not sure I agree with everything Peake suggests in the book. A few times I felt like he was, scientifically speaking, prematurely jumping to conclusions. To his credit, though, he didn't state theories as facts. He often amended clauses like "if this theory is true, the implications are astounding (mind-blowing, staggering or earth-shattering, insert your favorite superlative)" then he'd forge ahead with the next revelation.

The book is 222 pages with good margins, smallish font, which means there's a good amount of content. The writing is professional with excellent spelling and grammar [sans the Karlis Osis/Otis thing]. This is a remarkable book about out-of-body experiences, written mainly for science nerds and "brainiacs" like me. It contains no OBE techniques and only a few brief narratives but I'm still giving it 4 1/2 stars out of 5. I loved it. It really makes you think.