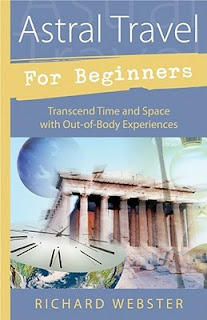 This book was published in 1998, so it's a bit dated (there are references to making and using cassette tapes, for example), but a lot of the information still applies.

Webster speaks from experience: He's had many OBEs over numerous years and he's taught many classes on the subject. He doesn't give any personal OBEs in the book, but you can tell from the way he writes that he's experienced. It's not just "textbook knowledge." It's obvious, for example, when he describes the invisible helpers:


"Some people experience "helpers" when they astral travel. Helpers are people who gently look after the person while he or she is out of the body. However, I have never seen them. Maybe they are there and I have been unable to see them, or perhaps the people who do see them are experiencing their astral travel in a different way than I do." (pg. 96)

They're invisible for me too. I can talk to them and ask for their help, and they're always unemotional and happy to lend a hand, but I never see them, and they usually don't help unless I ask.

It's also obvious from the way he describes astral sex:


"However, astral sex is not the same as physical sex. There is an exchange of energy and a feeling of ecstasy, but although it is satisfying, it is still different than sex on the physical plane." (pg. 98)

Not many authors talk about this, but that matches my experience. (But wait until you read my next review!)

This is your average run-of-the-mill book about astral projection. It makes the same basic assumptions that many OBE books make, namely, that there's an actual non-physical astral body "double" that leaves the physical body to travel to other worlds. In that respect, it's not very scientific, but most of the books in the genre make that assumption too. When I say "run-of-the-mill" what I mean is: he tends to over-simplify a lot of things. For example, he writes:


"You can instantly visit any place you want by simply thinking about it." (pg. 90)

Well, in my opinion, it's not quite that simple. I bitched about this in my first book. I've had countless OBEs in which I "simply thought" about a person or place, and fully expected to teleport, but was not transported anywhere. I tried visualizing a place. Nothing. I tried verbalizing a place. Nothing. I tried verbalizing my intent: "I want to go to X. Take me to X". Nothing. Get the picture? It took me a couple years to actually get the hang of traveling to an intended place (as opposed to just walking or flying there, which usually takes too long and almost always ends in distraction or failure).

It's hard to describe the actual mechanism. It's like trying to describe the taste of strawberries. "Kinda sweet, kinda tart" but nothing does it justice. In a futile effort, I often describe it as setting an intention, almost like setting an anchor point at a distant place, then pulling myself to that location with an act of will. Now that works.

Webster gives a really good history of OBEs from Ancient Egypt on. He cites not only references from ancient sources, early pioneers like Sylvan Muldoon, Oliver Fox, and Yram, but also scientific experiments done with super-psychics like Keith / Stuart "Blue" Harary and Ingo Swann.

He has some good dietary suggestions for aiding OBEs, such as:
With regard to diet, I found this bit interesting:


"Sylvan Muldoon, author of The Projection of the Astral Body, recommends deprivation. He feels that you are more likely to leave the body if you are feeling hungry or thirsty. I found the opposite to be the case. When I tried to follow his suggestion I was so preoccupied with my feelings of thirst that I could not leave the body. I eat lightly, but am not starving or thirsty." (pg. 72)

Webster gives a good description of other phenomena similar to OBEs, namely:

He gives some good suggestions for lucid dreaming, such as:


"Telling yourself that dreams are not real before falling asleep will alert your mind to the numerous incongruities that occur in every dream." (pg. 41)

The book has a decent number of OBE techniques, but Webster is a professional hypnotist, so many of them are hypnosis-based. He gives several good hypnosis scripts you can record and use yourself, including scripts for personal use (self-hypnosis), scripts for partner (two-people) OBEs, and scripts for larger group OBEs.

There aren't any radical, revolutionary, or startling new OBE techniques. All of these appear elsewhere in the literature. Still, it's a decent collection that includes:
Webster recommends you avoid alcohol, drugs, cigarettes, tea, coffee, marijuana before attempting an OBE. He also suggests an empty stomach when you make an attempt:


"It is better if people do not eat at this time, but a piece of fruit is fine, if the person absolutely has to eat something." (pg. 172)

Curiously, he then says:

Wait. What? No chocolate? That's the first time I've heard that.

Curiously, he devotes an entire chapter to Numerology and claims that OBEs are more likely on certain "Personal days." I'm sorry, but as a science-oriented guy, I just cannot swallow that. Since humans arbitrarily assigned numbers to the years (i.e. since Christ was born), days of the month (based roughly on the cycles of the moon, but warped based on the whims of various Roman Emperors), and days of week (based mostly on Norse Gods) I simply cannot accept that mathematically reducing all these very-arbitrary numbers can tell you anything of any significance. Unless, of course, it's all psychology: Your belief that they have significance definitely will influence the likelihood of OBEs, because your belief creates your reality (and I say that based on personal experience). That's why rituals work.

The book is 227 pages with decent sized font and margins, which means there's a good amount of content. It's professionally written and edited, clear and concise, which means I found no typos or grammar problems.

Other nice things about the book:

I'll give it 4 stars out of 5. Good effort, above average, but nothing that makes it stand out.