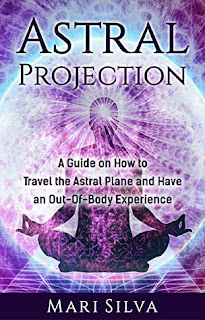 Today I'm reviewing Astral Projection: A Guide on How to Travel the Astral Plane and Have an Out-Of-Body Experience by Mari Silva. The book is copyright 2020. I chose this book because it's being widely advertised on amazon and has recently appeared in their best sellers list for "astral projection." It's also got a very cool cover.

Like every book in the genre, this book is a mixture of both good and bad. I was immediately impressed with the book's subtitle: It proclaims itself "A Guide," not "The Ultimate Guide." I guess I've been disappointed by too many "Ultimate" guides. My hopes were very high. Then the author dashed all those hopes on page 2:

[This book] "...contains everything you have ever wanted in a book on astral projection." (pg. 2)

Uh, sorry, no. Not quite everything. Then Silva got my hopes up in the very next sentence:

"This book is different from every other text on the market as it includes up-to-date, relevant information that will make your astral projection dream a reality." (pg. 2)

Poor choice of words, perhaps ("dream"), but ignoring that: I had high hopes of finding new breakthrough, maybe scientific, information about astral projection and out-of-body experiences based on the latest research. Instead, it turned out to be pretty much a rehash of very old new-age and/or occult beliefs about the OBE.

Silva doesn't document where her information comes from at all. Like so many lackluster OBE books, she doesn't give any credentials whatsoever. She doesn't cite any sources. She doesn't say where, how or from whom she got any of her information. She doesn't say why she should be considered an authority on the subject. She doesn't say how much experience she's had, and the book has no OBE narratives. Instead, she immediately launches into chapter 1, Essential Energy Concepts, in which she asserts that there are seven energy layers of the auric field, subtle bodies. She lists them as follows:

Again, she doesn't say where she learned this or why she thinks this is true. She just asserts it as fact. She also doesn't elaborate much or give details on these planes. So why should we believe her? We could just as easily choose to believe the cosmology Theosophy, which predates Silva by 100 years:

At least the Theosophists claimed to have sources, experiences, rationales, and teaching traditions to back up their claims. My copy of C.W. Leaderbeater's book The Inner Life has 373 pages of explanations. My copy of A.E.Powell's The Astral Body has 252 pages of tiny font. So they go into a lot more detail and justification. Not that I agree with them either; it's just that warning bells go off in my head when people make unsubstantiated claims like this. But I digress.

"Many people refer to astral projection and OBE as the same thing; however, they are different. Astral projection is an intentional OBE. It involves everything that happens in a usual out-of-body experience." (pg. 12)

"You can say that OBE is the scientific term, while astral projection or astral travel is spiritual. But they all refer to the same practice or experience, with only slight differences." (pg. 12)

Near the end of chapter 2, she talks about the mechanism to achieve OBEs:

"There is a physical switch that can be activated at will to trigger a state of astral travel. You activate this switch when you engage in intentional and conscious astral travel or an out-of-body experience. It is located deep in the brain and is referred to as your pineal gland. When the pineal gland is activated, it releases dimethyltryptamine (DMT). This DMT is the chemical that alerts and propels your soul out of your body." (pg. 16)

I'm sorry, but this is just way too unscientific for me to swallow. Silva's belief may stem from Dr. Rick Strassman's book DMT: The Spirit Molecule in which Strassman proposes that the pineal gland may produce small amounts of DMT, a powerful but short-lived hallucinogen, in addition to its primary job of manufacturing the sleep drug melatonin. But Strassman never asserted anything about it propelling your soul out of your body. That's too much extrapolation.

Here's another point of contention. In chapter 3, she distinguishes between astral travel and dreams. She writes:

"In dream travel, the experiences don't feel as vivid. Instead, they feel mundane and vague." (pg. 21)

That directly contradicts conventional wisdom, scientific scrutiny, and experience. Lucid dreams often have more mystical qualities, and tend to be more realistic, vivid and intense than OBEs. OBEs tend to be more mundane. There is, however, a qualitative difference of consciousness between the two. Ordinary dreams seem hazy because we're unconscious. Perhaps that's what the author meant?

In chapter 5, "8 Things You Should Know Before Attempting an OBE" Silva states:

I found this to be little more than fear mongering, and not very helpful. Nobody has proven that, and the majority of OBE books claim that it's not dangerous at all. If you go into OBEs confident and fearless, nothing can harm you. But she doesn't really say that. She does, however, offer advice about protecting yourself, creating an astral sword and such, right out of Erin Pavlina's playbook.

"Nevertheless, many controlled tests have shown that OBE is real and astral travel is, in fact, real. People who have successfully had out-of-body experiences have explained how it felt and what it seemed like. So many people cannot hallucinate the same things and have such similar experiences in the astral realm. So, yes, astral travel is real, and it works." (pg. 32)

Again, this is way too unscientific. Where are these "many controlled tests?" If true, cite some. Why should we believe her if she cites no references and offers no proof? I recently published six articles on my blog about the evidence of whether OBEs are "real." I've made it my business and my mission to search out evidence. But I've found no "controlled tests" beyond those. We're supposed to just take the author's word for it? Aside from that, why can't millions of people have the same hallucination? We all have human DNA, similar foods, similar upbringings, etc.

As you can tell, at this point I was getting pretty cynical and negative about the book. But it got better. Chapter 6, "Preparing for Astral Projection" offers some decent advice, including:

She also offers some decent tips for getting ready:

Silva also has a decent take on fear:

"The key is not to let that fear overwhelm your mind to a crippling point. Some people may tell you that you have to get rid of fear completely before you can astral travel--that's impossible, especially if this is your first time and you fear the experience. You are bound to be scared. However, don't be scared to the point where you let your fear overwhelm you." (pg. 37)

Chapter 7, is "Basic Astral Projection Techniques." This is where the book starts to be redeemed. The author gives a decent set of OBE techniques, although none that are new or game-changing. The techniques are:

Chapter 8 is "Advanced OBE Techniques". The techniques are:

Chapter 9 is "What to Expect When Astral Projecting." It actually gives a decent array of exit symptoms, such as paralysis, vibrations, increased heart rate, buzzing, sinking, floating, loud noises.

This only takes up a page and a quarter; certainly no match for the FAQ I did for this blog in 2019. I didn't find any of her answers particularly appealing or satisfying. For example, she recommends not talking to people in an OBE unless they talk to you.

I believe in a cautious approach, but I've never had a problem talking to people in an OBE, both in-the-body people and out-of-body people.

Chapter 10 is "Protecting Yourself in the Astral Plane." It's actually a pretty decent chapter. For example, she gives some very practical advice on raising your vibrations, such as:

Chapter 11 is "Meeing Spirit Guides and Other Advanced Astral Travel Adventures." This chapter disappointed me. It didn't talk about the invisible helpers I often encounter in my travels. Instead, she talks hypothetically about the various kinds of spirit guides; all taken from new age playbooks. She also talks about the Akashic Records in this chapter. (Something I've never seen.)

Chapter 12 is "How to Return to Physical Body." The author suggests that everyone has a silver cord, and all you need to do to return to your body is turn around and follow it back to your body, although the journey back will likely be only a second or two. In a way, that's kind of a cool idea, and innovative. On the other hand, getting back to my body has never been a problem for me. For me, it's always a matter of trying to prolong the experience as much as possible. Why would you want to go back? I return when my body absolutely demands it, and I'm yanked back by force, and not one second earlier! Plus, many people don't see a silver cord, even when they look for one.

Chapter 13 is "After-Effects and Integration." This is more of a hodge-podge of things, such as Out-of-Body Meditation, Journaling, etc. I disagreed with this statement:

"Astral projection is one thing that may feel intangible, but writing it down makes the experiences feel more real." (pg. 92).

That's not what science says. According to professional psychiatrists Glenn Gabbard and Stuart Twemlow, in their book With the Eyes of the Mind, out-of-body experiences usually feel more real than dreams and lucid dreams. Sometimes they feel more real than waking life. People often remember OBEs in great detail even when they don't write them down. (But note that you should always write them down to strengthen the connection between awareness "here" and awareness "there".) If it doesn't feel real, you probably aren't as "conscious" as you could be for the experience.

The last couple chapters were about energy healing and increasing your clairvoyant abilities. I didn't find them particularly helpful.

The book is 100 pages, with decent format, medium font and narrow margins, which means there's a medium amount of content. The writing, grammar and spelling are all pretty good. Silva consistently misspelled the word "hypnagogic" as "hypnogogic" but I can overlook that: I had several instances of that mistake in my first book. Which makes me wonder if she read it...hmm.

On the plus side, there are some good techniques in there, but nothing you can't find elsewhere. On the minus side, the information is clouded in outdated new-age beliefs. It's forgivable in a book like, say, Ophiel's book from 1961 (which I'll review next time), but that was written sixty years ago. This is 2021.