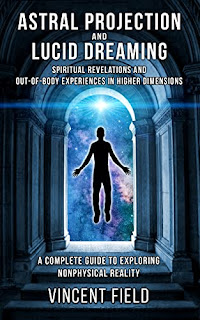 Today I'm reviewing Astral Projection and Lucid Dreaming by Vincent Field. The subtitle is Spiritual Revelations and Out-of-Body Experiences in Higher Dimensions. The cover also says it is "A Complete Guide On Exploring Nonphysical Reality." It was published in January, 2022.

My first question is: Why didn't he call this--or even title the book--The "Field" Guide to Astral Projection? Now that's just an opportunity lost!

When this book was published, it was hyped. A lot. It made quite a splash. Lots of people were singing its praises. And of course, I was very skeptical. So how good is it? Well, it is actually quite good. In fact, I loved it. Not enough to give it 5 stars, but not far off.

I always like to start off with the negatives so I can end on an positive note. So let's get right to it.

The book is obviously self-published, because it's missing the normal dates, copyright notices and all that legal stuff at the front. Second, there were a few small-but-glaring mistakes that a publisher would have caught. I can't fault him for that; my self-published books have the same problem. And nowadays, publishers don't seem interested in this kind of book anyway. But I must say, for a self-published book, he did an excellent job. The mistakes I found were few, and the book was very well written.

The biggest down-side is that Field does not give many solid astral projection techniques, nor much advice on how to induce them. If he had, it might have merited a five-star rating. The closest he comes is to mention using Hemi-Sync recordings, Wake-Back-To-Bed, and other types of meditation, but no real details. He does, however, stress the importance of keeping a dream journal. He also talks about practicing Mindfulness. He does, however, describe a technique he calls "fall asleep fake-out."

"The person essentially tries to fall asleep for several seconds, all the while holding the intention of reawakening the mind before it slips into total unconsciousness. This usually always causes an immediate deep internal shift into the out-of-body state. It's recommended that this is done immediately upon awakening from sleep as the first technique used to attempt an OBE, and it can be combined with other techniques for maximum effectiveness." (pg. 187)

I was disappointed that Field never mentions how he learned astral projection. He does some scant name-dropping, mainly Robert Monroe and The Monroe Institute, and some mysterious "other books." Why don't these authors want you to know who taught them? Was it William Buhlman? Michael Raduga? Robert Bruce? Inquiring minds want to know! Why can't they give credit where credit is due?

Why did I love the book? Because the whole book is pretty much all narratives, and you know how much I love OBE narratives. Field gives loads and loads of them, all of which lend credibility to what he says, illustrate the author's key points, and give you a good idea of what OBEs are like. The narratives are followed by an explanation of what he had experienced and what conclusions can be drawn from them. And they're very honest. He doesn't jump to absurd conclusions about his OBEs and openly admits there may be possible alternate explanations. For example, he openly states:

"I personally have never visited the same exact nonphysical location twice that I have been able to distinguish, so I can't comment on the objective nature of the astral dimension." (pg. 58)

And they're not just straight-up OBE narratives; they often show a progression from a dreaming state to a lucid dream state, to a full-blown OBE.

Field's OBE narratives span from March 23, 2000 to March 3, 2019: an impressive span of 19 years, and they're basically in chronological order to give the reader a good sense of progression.

I can tell from Field's narratives that his experiences are genuine and not made-up or over-the-top. He describes things "out there" in such a way that he had to have been "out" himself; there are small clues that can't easily be faked. Here's an example:

"I decided to look to see if I had a body anyway, and found a pair of perfectly formed, solid-looking arms and hands reaching out in front of my field of vision. I was able to feel energy within these appendages as I observed them, but when I put them down and they were out of my field of vision, I could no longer sense them. It seemed as if my mind had temporarily created an illusory pair of arms and hands out of my desire and expectation to see them." (pg. 185)

This gives you a good idea of what I mean when I say "Schrödinger's Astral Body"!

I also like Field because his experiments were a lot like mine. He gives several OBEs in which he tries to make contact with God and Jesus Christ, and always with very interesting results. In other OBEs he tries to contact his "Higher Self." In at least one case, it seems like Jesus communicates to his Higher Self and the message is translated from there to his normal conscious self.

Unlike most OBE books, many of Field's OBEs are encounters with what he believes to be aliens / extraterrestrials, and almost all of them are the same kind of E.T. with triangular-shaped heads, big eyes, and orange skin. In fact, he writes:

"It's my belief that many alleged abductees are actually having out-of-body experiences involving nonphysical entities." (pg. 80)

I wrote a whole chapter about this subject in my second book, Lessons Out of the Body. If you're interested, you can read it at this link. Many of these Alien-Encounter OBEs are quite scary and concerning.

He has some good advice about overcoming problems, such as screaming out your intentions, forcing a change of expectations, and so on. For example, if you can't get through a wall or door, he recommends you visualize yourself on the other side of it, and that seems to work.

The book also contains many observations that mesh with mine. For example, most occult-oriented books assume you "inhabit" a non-physical body and use it to interact with a different dimension. But I agree with Field when he wrote:

"Usually a projector is only aware of one dimension of experience at a time, so it seems that one is merely shifting from one level of reality to another, when in reality one is engaged in multiple levels of reality simultaneously and simply shifting one's focus from one level of experience to another within the wider range of one's consciousness that expands throughout multiple dimensions." (pg. 170)

"OBEs are essentially a shifting of one's frame of reference from the body into the other areas of the wider system of consciousness in which one is intimately connected." (pg. 188)

Here's another revelation I completely agree with:

"There is a translation process between the higher mind and the conscious mind that converts non-physical experiences and knowledge into concepts and sensory data that can be related to and comprehended by one's base level consciousness, in a way dumbing down the true nature of these experiences, which my intuition tells me are far more convoluted than they appear to be." (pg. 205)

Hear hear! This is exactly why I hate books that have narratives that are too Earth-like: "My astral guide pulled me out-of-body and took me to a city, where we sat down at a table with pink roses and golden cutlery. He handed me a drink, then instructed me thus"...followed by four pages of new-age teachings from an "ascended master." Sorry, but it's just not like that. OBEs are otherworldly and in my mind it's not okay to give them Earthly trivialities. Field has been there and he gets it, and he portrays that well in the book.

This one also exactly matches my beliefs based on my own experiences:

"It seems there are higher aspects of my non-physical self that actively engage in various experiences and interactions totally hidden from my conscious mind. I believe I shifted into a more expanded state of consciousness in which a higher aspect of my mind was engaged in another level of reality. This experience supports the theory that there are multiple aspects of one's consciousness that exist in a spectrum or gradient, and that there are always multiple dimensions of experience simultaneously taking place throughout the spectrum, even though one is usually only aware of one level of experience at a time." (pg. 211-212)

Right on. This is true.

Field had a particularly troubling encounter with a negative entity in 2019, which caused him to end the book with this negative and cautionary note:

"It is also important to exercise caution and understand that malevolent entities exist in non-physical reality and can cause real harm, whether you believe it or not. I have heard many people downplay the reality and dangers of negative spirits, claiming that simply sending love and light will provide all the protection needed. However it is not as simple as that....Because of these dangers, I do not recommend the practice of out-of-body experiences, although that's not to say that one cannot benefit from them if approached wisely and carefully." (pg. 227-228)

Well, I'm not sure I agree with that. I think there's a lot to be gained through astral projection, and rare negative encounters just go with the territory: part of the challenge is learning how to deal with them. Would you stop camping because you had an encounter with a bear? Some might, but I wouldn't.

The book is 228 pages with small-ish font and pleasant margins, which means there's no wasted space and plenty of good content. The writing is mature and honest. I only wish he'd have given some OBE technique details. I don't think it was an oversight. I think he left them out because he didn't want people to dabble and have encounters with aliens and potentially negative entities.